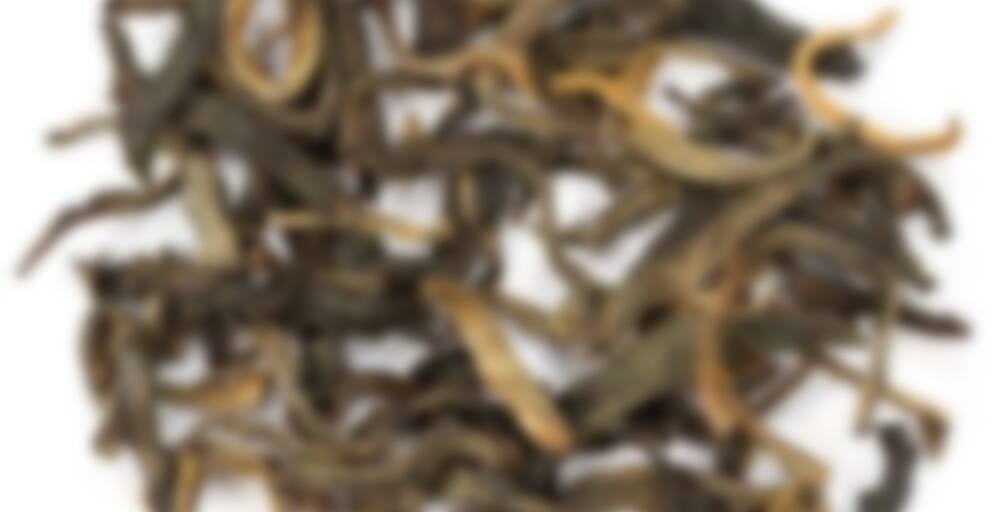 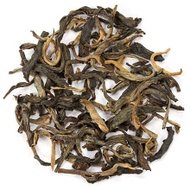 by Adagio Teas
78
You

Mambo originated from the fusion of Cuban and American Jazz. Our Mambo blend is also a unique fusion of two similar, but quite different, styles: black teas from Yunnan and WuYi areas of China. Smoky, savory aroma, lingering notes of cocoa from the Yunnan, refreshing mineral finish from WuYi. Plush mouthfeel and succulent texture. The flavorful, rich body of our Mambo is guaranteed to jazz up your mornings and keep your feet tapping all day.

I paid absolutely no attention to preparation this morning, but I must have hit a sweet spot with this one—it is cocoa-y and juicy and … about two sips from gone. How did that happen?

A really good mix from Adagio. (Just curious—I wonder if they’re raking in more profits from their blend-it-yourself pop culture teas or from their original selections.)

Every time I see a new movie blend I wonder the same thing!

I was tempted to call them “vanity teas :)”

96
tea-sipper
3710 tasting notes
Additional notes: Yes, I’m having this one again a mere two weeks after the last time (unusual to have the same tea again so soon.) I’m really just posting again for a note to self: This tea gets that burned dark chocolate flavor if steeped just after boiling, with a bit more than one teaspoon for longer than three minutes (probably around five.) This cup was a lot weaker than the other, so I’m trying to remember why.

Well, poopsicles. Looks like the computer ate last night’s tasting note somewhere between my writing it and it actually being posted! And here I was just thinking y’all didn’t like my ridiculously over-sharing personal rant-reviews anymore. Let’s see if I can remember what I had to say:

Ah, well. Remember that bakery job I told you all about that I started a few weeks ago? Hated it. Hated it so much that I quit on Saturday. My manager, an absolute sweetie to whom I bear nothing but good feelings and apologies for taking off without a notice period, was absolutely understanding. That, at least, was something. The upshot of it was that instead of the R&D I’d been told I was going to be doing, they started what will be about 3 months of ongoing renovations, leaving a kitchen with concrete dust and wires hanging from the ceiling while people are trying to make bagels and brownies in a tiny, cramped space that’s scarcely sufficient for the volume of stuff being done. It’s hotter than Lucifer’s scrotum, and in addition to my hands seizing with tendonitis and becoming useless, it hurts to stand on my ankles, and my eczema’s manifesting itself in places it’s never been before, like the backs of my hands and arms. It’s not like building up the muscles you need to do heavy lifting. This is the kind of chronic stuff that only gets worse. Coming home in tears isn’t worth 4 6-hour shifts a week at 6 quid an hour. Sorry, gang, it’s back to a functional home bakery (and unemployment) for me. OH GOOD.

I’ll miss the fanta floats. It’s not on the menu, but man, a pint of fanta with a scoop of raspberry sorbet and vanilla ice cream? MAGICAL.

So last night, feeling a combination of relief and fear (given that I’m paying rent on two flats for the month of July, which I decidedly couldn’t even afford on my meagre bakery income, let alone none at all – feel free to tell your friends I’m taking illustration jobs!) I brewed myself a load of mambo, because mambo is a feel-good tea. It’s got just enough je ne sais quoi to it to keep you interested, without being overly challenging. It’s smooth and gentle and recalls flavours of ripe peaches and soft dustings of cocoa. There’s something incredibly comforting about it, while retaining a lightness: it’s like being hugged by downy soft pillows when you need someone to tell you that everything’s going to be okay. I’ll be sad when I run out of this one, and then I’ll be immediately onto Adagio’s website to restock.

Oh, that whole situation sounds so upsetting. Aside from illustration gigs, what sort of work are you now looking for?

Hope your future holds better things for you Sami. But I see you keep your sense of (dark) humour, I have never heard of “Lucifer scrotum” before and I am still ROFL about it ;-)

Sorry, I hope you find something better soon!

Thanks guys! I’ve been through enough silly garbage in the past year that if I can say that this is the grim nadir of my working life, I’ll be quite all right with that. My ambitions have shrunk a little, but I’d still quite like to write for Doctor Who, while also working in academic administration? Sigh. You guys are awesome.

I ordered this because it seemed to be a mix of the kinds of teas I tend to like. I wound up taking it to work this morning. It’s a good-quality tea, but the flavor profile isn’t quite what I was hoping for. It’s rounded in that dark fruity kind of way I’ve never genuinely liked. I’ll have to give this a more detailed review later, but for now, I am tired and I am busy and I’m about to try another tea for the first time…

Hrm. This is much better than I expected. Sweet in the way that I expect Yunnan teas to be, but also robust in the backnote. Had it with breakfast, excellent!

When I looked into the canister I could immediately see two distinct types of tea leaves in there. One type was a mix of black and gold and made into thin, rather curly twists, while the other leaves were much larger and more loosely twisted and a uniform black colour. I assumed that these were the Yunnan and Wuyi black tea leaves repsectively; I’ve tried various Yunnans before but I’ve never tried a Wuyi black, just their oolongs.

The tea’s scent in an interesting mixture of smokey and delicate, slightly floral notes. It’s flavour is surprisingly mild as well – I was expecting some more robust and Yunnan-like in character and while the tea does have some of those smokey-tannic notes is much milder and smoother. There’s also an interesting fruity aftertaste that reminds me a bit of a particular Wuyi Yancha oolong that I’ve tried (from H&S, not Adagio). This is a really unique black tea, I’ve got to say.

Received this in a tea swap from Tabby!

This is a nice black tea that has light smoky notes that hit the tip of your tongue, but a very smooth fruity finish that lingers on the palette until the next sip. Reading other reviews on adagio’s website I got the impression that this would be a very smoky tea, but the flavor is much more subdued and mild than, for example, a lapsang souchong or a rock oolong. I also wouldn’t necessarily call this a breakfast tea as many reviewers do, but rather perhaps a mid morning/early afternoon tea that gives a jolt of energy and flavor to help you get through the middle part of the day.

Boiling 3 min, 0 sec
Yours I Like This
4 likes
2 comments
Edit

Glad you liked it! :D

And I’m glad you liked the honeysuckle :)

Not bad..flavorful. It has character and a few smooth notes. I found it to have many different types of flavors and they all played well together.

Long time, no reviews from me. I tend to experiment more in the winter and drink less tea in the summer. I just haven’t seemed to develop a taste for iced tea to carry on this addiction during warmer times. I still do appreciate a cup or two in the morning however.

So on to the Mambo sample from Adagio. The smell of this tea before brewing it has a strange almost mint-like spiciness… I wonder how this will come through when brewed? The label claims this is a mixture of Yunnan Jig and Wuyi Ensemble. Both teas from Adagio I have drank before, I don’t remember this smell coming from either, but it has been a while since I drank the Wuyi.

This is my second steeping and I added some additional tea before brewing which is a technique I have found works well with several Yunnan teas (Yunnan Noir makes an awesome second cup this way). The first cup was brewed for 3 minutes with about 9 ounces of water and a teaspoon and a half of tea. The second cup was brewed for 3 minutes with the same amount of water and 3/4 of a teaspoon of additional tea.

The aroma of this tea is quite nice part buttery, part grassy, small part sassy (very slight smoke?) and spice-like. I think this last bit (smokey spice) is what my nose was smelling before brewing.

Taste is a well constructed fairly mild black tea with some slight grassy notes. All in all a good drink that I shall put in the buy some more when you get a chance pile that will let me experiment more with tea amounts and steeping times.

I first got a taste of this while trying out several signature blends that others had assembled on Adagio’s site. I found myself drawn most to the ones that contained Mambo, and decided to try it straight. I was in love.

This was my staple morning tea for a long, long time. I remember sitting on my bedroom floor every morning before work, taking a few moments to enjoy this tea and paint some watercolor splotches on cheap pieces of copy paper that were destined to be folded into little paper birds (I was too cheap to buy pre-printed paper, and well, it was more fun this way).

Something about this tea made it positively invigorating. A blend of black and dark oolong teas (Adagio’s Yunnan jig and wuyi ensemble), it seemed to hold the best of both worlds— cocoa-y, fruity, yet somehow very savory, a rich and full mouthfeel that never failed to wake me up.

Drinking this every morning sadly wasn’t as affordable after a while, and I went to just drinking the Yunnan jig (funny how I started out with blends and then narrow down to the ingredients I like most), which is nearly as good (and $10 a pound cheaper) but occasionally I’ll blend it with a little dark oolong to attempt to recreate that characteristic richness.