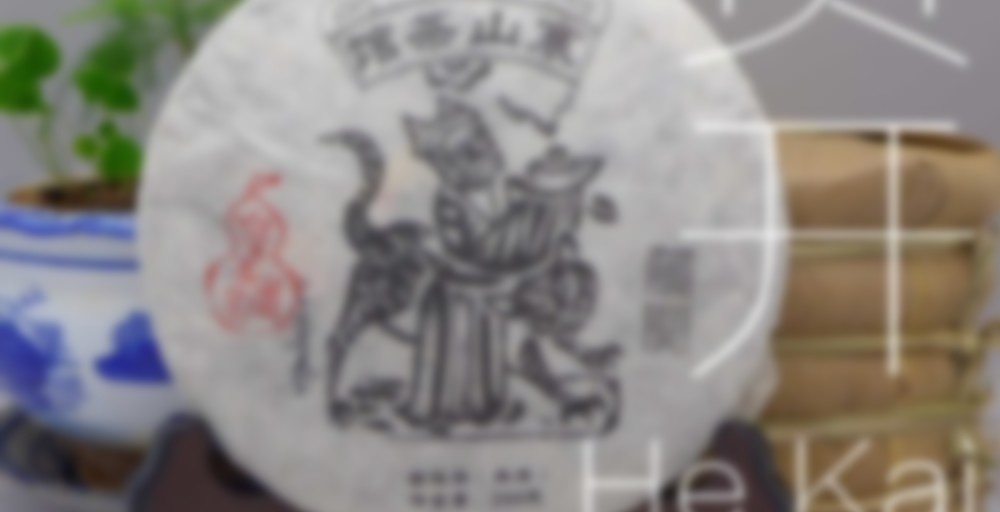 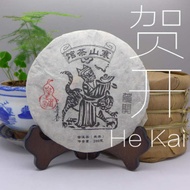 2015 Chawangpu Hekai Gushu Raw 200g
Harvest Area: ManNanLaoZhai, Hekai mountain, Menghai county
Material for this cake came from Man Nan Lao Zhai in Hekai mountain. Man Nan Lao Zhai is home of Lahu minority. There are very few small trees in the tea gardens, most of the tea trees are really old, which have lived for several hundred years. We picked out the first picking tea in late March before the rains came. Silver and fat buds, dark leaves, strong aroma. The taste is rich, oily and full in mouth, bitter as Hekai is, aftertaste is fast and sweet.

Got this sample from the Sheng travelling box and this is my first tried ever drinking a chawangshop lineup. I cant really describe the aroma, very particular. The tea is sweet, floral and also find some hay taste to it. I also like it’s not bitter. Little mouth coating and lingering. Long sweet after taste, very good overall. Good energy, got some tea drunk effect up in my head. Nice looking big leaf and green

Cotton candy! I have the new one awaiting to be brewed.

I’m a big fan of Hekai. It’s bite-y and crisp. This one lays right in those tones, and it’s great. The leaves are long, twisted, and shiny. An intoxicating aroma of warm honey, dry grass, and some light floral lift from the leaves. The fragrance is fresh, pleasant, and lasting. I warmed up my pot and placed a chunk inside. The scent opens into what I would describe as fibrous. A ton of oatmeal with nectar and maple wood. This is a rustic breakfast tea, haha. I washed the leaves and prepared to brew. The taste begins with a sharp bitter bite and instant power qi that washes over the body. Afterwards, a light sweetness calms the palate. I had to wrestle with this tea a little bit, for the bitterness continued to bite, and the qi was overpowering. I continued flash steeping, for I like a challenge, and it paid off. The calms down and presents a flavor profile of light white grape tang and dry sweetness. This is a nice solid tea with bite and soon after soothing qualities. I peek into my pot and notice the heavy bud usage and small stout leaves. I enjoyed the pulsing qi and thick sweet lingering taste in mouth for long after the session.

Very nice review. I loved this one too and it deserves a revisit.

Enjoyed this. Thanks whoever suggested it from my chawangshop thread.

Got this out of the Puerh TTB. It was pretty good, though not particularly remarkable.

Dry leaf smelled lightly grassy, wet leaf smelled more mushroomy or like forest floor. Slight disclaimer regarding mushroom notes: I’m not particularly fond of mushrooms themselves, and am thus not intimately familiar with their flavor, so when I say something tastes mushroomy, I’m not sure how accurate or whatever that is – it’s a bit of a savory flavor with some similar characteristics to forest floor/wood/moss notes for me.

The first steep tasted lightly grassy with a slight vanilla sweet note. After that, the mushroomy flavor started coming to the front of the sip, at times becoming more vegetal. The vanilla finish lasted for only a couple steeps, later replaced by a slightly citric sweet note that I struggled to place – maybe a bit like pineapple. The texture was decently thick, though I don’t think I’d call it creamy or oily. The flavors balanced out after around 6 or 7 steeps and it became harder for me to pick out individual notes. The flavor began to die out around 9 steeps, though it did yield a few softer and lighter tasting infusions after that. A pretty good tea, but probably not one I’d want to pick up a cake of, though the price is reasonable. I’ll need to try some other stuff from Chawangshop in the future!

One of the joys of pu’er is exploring the various terroirs of Yunnan. Hekai is right in the middle of all those regions in Menghai county that tend to be overpriced, and perhaps even over harvested. This tea seems to defy all of that—it’s inexpensive relative to 2015’s maocha prices (still at $36 for 200 g!) and quite pungent. Really, Hekai is where you can get the pu’er version of quality dry chardonnay.

The leaves on this cake are mostly highly fragrant, silvery plump buds. The aroma is dynamic and evolves with each steep—making it hard to place initially (perhaps sweet pistachio?). Around the 5th steep I smelled roasted peanuts. This is wonderfully full-bodied with a pleasurable mouthfeel, potent qi, nice huigan, and a bittersweet, dry chardonnay-like aftertaste that stays for quite some time.

Key flavors are cotton candy, moscato grapes, broccoli rabe and mustard greens, and in that order. It starts to fade at steep 7, but the leaves still give tasty cups of tea until they fade completely at steep 13 or so. What a great value!

Dried drinking through this one… only got trough sips of each steep because it just wasn’t appealing. It might be a 2015 sheng, but for me the year doesn’t matter as much as how I feel from it and the taste it puts out. This one right now just makes me wish I brewed something else.

How much leaf did you use?

I used 7g. I’d try brewing more leaf as sometimes the flavour can be too weak; however, if you’re decidely against this tea that may make little difference.

I like light sweet sheng… Or potent I forgot what the heck I just drank kind of sheng.
This wasn’t near either of those two descriptions.

Summary: Bright, lively, citrus with good base. Let down by being a bit flat and lacking clarity. Good staying power – it just kept on brewing.

Wet: Bright concentrated herbal, but with a bit of base. Strong leaves. Promising…

10s – Light yellow. Lively, bright concentrated herbal with some base. This is better than their 2013 Chawangpu Gao Shan Liu Shui. The flavour stays in the mouth.

12s – Light yellow. Pleasant bitterness. Slightly astringent on the swallow, but the sweetness pushes through.

15s – It has some high mountain Oolong in the body. The high sweetness is balanced by a slightly woody base. This is quite good.

Many more fresh and lively brews…

For the last couple of days I’ve been drinking aged sheng, Yang Qing Hao samples mostly, but today I decided to go back to young sheng, trying to get through some samples from Chawangshop. I’ve been curious about this one for awhile. Well, I’ve been curious about Hekai in general. I have to say, at only $36 for a 200g cake, I will very likely add one of these cakes to my next CS order.

Wet leaf aroma is juicy fruit. Brew is smooth, sweet, and not too bitter at all, particularly with water just under boiling (200 degrees F). I did use boiling water initially and I found the tea to be on the bitter side. One of these days I will remember to count my steeps, but I’m sure I’m well over 10 and it’s only now starting to fade just a bit. The leaves are largely whole and beautiful .

This is an incredibly calming/sedative tea, but the calmness is juxtaposed with a serious hunger. I do not know if this is related to the tea or if it’s PMS or it’s close to dinner time and I just need to eat, but as my Irish wife often says “I could eat a farmer’s arse through a hedge backwards.” I honestly don’t know what I want to do more right now: keep drinking, eat, or sleep. Will likely settle on all of the above.

Finally learned how to brew this