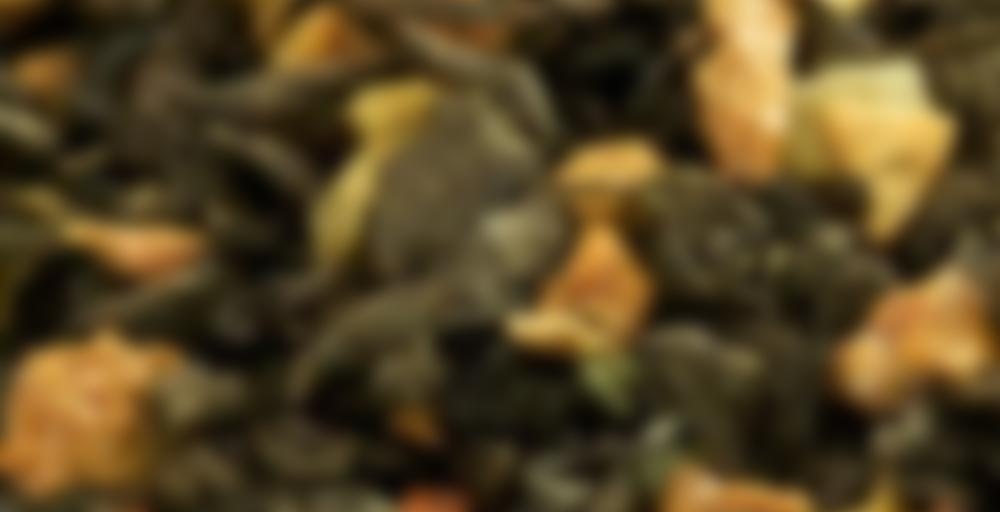 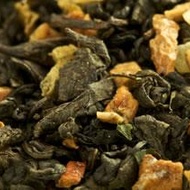 This feisty gunpowder green tea is blended with lime peel, apples, pineapple and natural fruit essence. It’s delicious hot or cold, and even more delicious as a martini. To impress your date, add four teaspoons of Lime Bang leaves to two cups of gin and let it infuse for two hours. Then shake with ice and serve. Stir in a little agave sugar if you want a smoother bang. Garnish with mint or lime peel.

A quick note: I brewed this last night at 80 degrees (and I know this because of my variable temp kettle!) and this was a totally different cuppa tea. I got the green tea very bold in the foretaste, almost cinnamony and then a hint of lime in the background. I do prefer the lime to be a bit more bold (as I find it is if brewed at slightly higher temps) but this was interesting. To taste mostly green tea and not hate it was a big step up for me. It did make me feel slightly nauseous (as I find green teas and puerhs do sometimes) but I might be ready to give green teas a shot sometime in the next few months. As long as they don’t make me nauseous, cuz nothing is worth that.

Thanks to Janelle for sending me a sample of this tea! It’s pretty darn tasty!

The main flavour I’m getting is lime (shocking), kind of like that from Lime Gelato, complete with creaminess. I’m not tasting too much of the gunpowder smokiness that I was expecting, but that’s ok – it’s working well as a base anyhow! I tried sips of this tea both hot and cooled and like it better cooled, so I suspect it would be best iced. Too bad this one is no longer around :(

This tea was SPECTACULAR! I really liked it, it had a lime (reminded me of 7-up soda) twist to a quality green tea to begin with. The tea is just straight up a solid green, with exactly what it advertises a lime BANG! Which kinda caught me off guard because I wasn’t expecting that much of a bang. It wasn’t tart like I would have expected it to be, it was just right. The green tea part of it wasn’t too grassy but at times had a herby taste too it, but it was fine for me! Well I will be having this one again :) I’m off to Florida for the next week, I will be drinking plenty of tea on the go tomorrow : Anyone have any reccomendations for starbucks teas while on the go? Please let me know. I will still try to tealog every chance I get. If only steepster had an app so I could tealog from my ipod….

i love starbucks teas! i usually get a “no-water soy chai latte” every day, I also enjoy the rooibos tea latte (bags), they tend to make the matcha (green tea) latte poorly don’t get it, for iced the passionfruit iced tea is delicious

This tea tastes a lot like lime. Which does make sense as it is called lime bang.

Have to say, that it smells great, kind of a kumquat smell
It has a really strong lime taste, that really hits you when you drink it. The sourness hits pretty fast and you taste some of the apple that’s inside. I don’t really taste the pineapple however just a lime green tea. Yet to try this iced but its pretty alright to drink, very fruity.

From what i can tell, this is a pretty low grade gunpowder tea, it is a bit over-roasted is some places and full of stems and broken leaves. There are whole leafs too and they are of the fairly big variety. There is tons of sediment, and the overall quality of this tea is not that great. Regardless however, it turns out a really nice green colour. The is a ton of lime peel as well but the problem is that the fleshy white side of the peel makes the tea slighty bitter sometimes regardless of steeping temperature.

I find it tastes best, 1st infusion @ 85 deg, then the second one with boiling water.
It wont turn the tea bitter and you will have a smoother tea on the second time around with a hint of sweetness (i’m guessing from the fruit pieces). I tried it with sugar on the first infusion, and i have to say, i prefer it without. I personally find the second infusion to be better than the first one, the lime is still there but the tea is much smoother and less bang, in-your-face taste the lime flavour. I would agree with the comment that says this tastes somewhat of a mojito, just without the mint.

Yeah, definitely this blend just have a lower quality Gunpowder Tea which I just find… Sad!

totally agree with you, i just wish they used higher quality teas on the flavoured blends.

Wow. I wanted to have some tea after going for a walk with my 2 year old and having the battle to get him in and into bed for a nap. (2 year olds are lots of fun sometimes but he keeps my life interesting. LOL) I didn’t want to have a black and I really wasn’t in the mood for an herbal or trying to strain a Roobios so I decided I felt like green tea. That’s when I remembered that I bought this one on the weekend. The smell when I opened the package was amazing. Hard to describe other than the great Lime scent. I only steeped this for 3 minutes due to the aforementioned battle of wills with the 2 year old but it is a lovely colour of light green and the smell is still there. The taste is amazing. It is light and refreshing and tastes like it smells. I was expecting a bit of sour taste but you get the lime flavour without the sourness.
I love this tea and will be restocking for sure.

Of all the teas available from DAVIDs Tea, this is my favourite. It is excellent both hot during the Winter months, and iced in Summer. The lime is strong without being overpowering. It’s also one of those great teas that you can have at almost any time of day. Love it.

I fucking agree with you! This was the first tea i’ve tasted from DAVIDsTEA and i’ve just felted in love with this brand!

The taste is… different. I’m picking up a sweet but slightly smoky taste, and it finishes up with some lime tang. The other fruits shine through in the aftertaste. I’ll probably try a proper steep (lower temperature) later and see how that does.

Wow, I was not expecting this tea to have a sweet lime creamy smell. The taste was not that tart that I was expecting it to be. I am sad this tea is being discontinued, I might purchase a tin before it is sold out.

I didn’t get much of the gunpowder taste though, but that’s ok because I really like this!

I did a re-steap of some leaves today in my David’s tea travel mug, and it turned out really well. Even with the higher temperature and the longer steep time (the leaves were in the bottom of the mug the whole time, it didn’t get too strong or bitter at all. Glad to have another tea that’s good for more than one cuppa!

I must say that the smell is really really lime-BANG! And, the taste? It’s a great (not really exceptional) Gunpowder tea taste with a good lime aftertaste, a light lime taste.