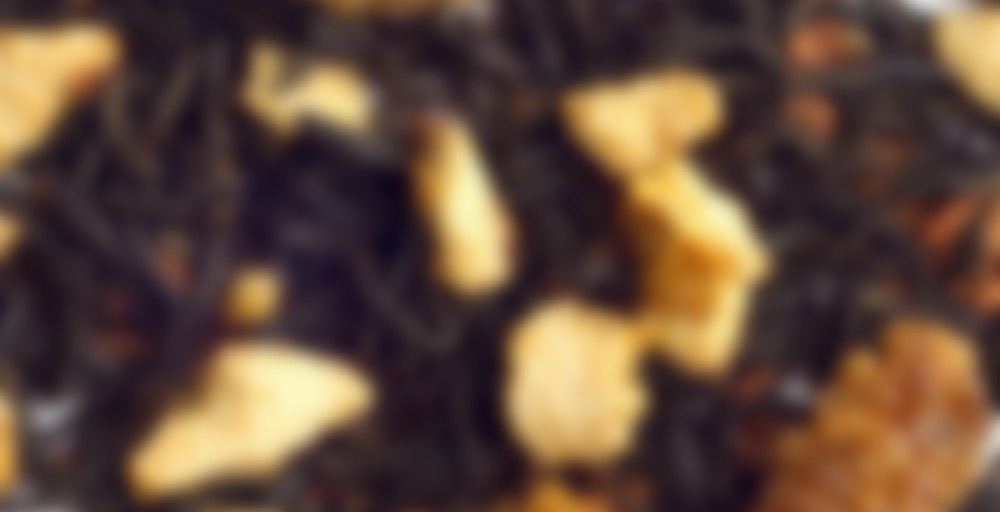 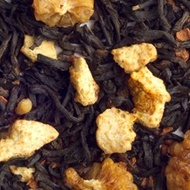 with 56 Ratings Rate this tea Rate This Tea

Have you heard about the new tea in town? She’s a looker alright: dark, robust, and seductive, with a heart of gold. And you didn’t hear it from us, but she’s even better with a little booze. She’s a luscious black tea, with deep caramel flavour from dried golden mulberries and spicy warmth from orange peel and cinnamon. Take her apple picking. Bring her to Thanksgiving dinner. Sit with her by the fire. You’re going to want her by your side all fall.

Yesssss, a sipdown! Let’s see how many days in a row I can manage to have at least one of these…

Anyhow, in spite of the lack of mulberries in this cup, this tea is delicious. I’m still confused as to how I thought that it was pretty much the same as Glitter & Gold, because it definitely isn’t. It’s all caramel and orange, and very little spice. I often am not a fan of citrus in teas, but it’s absolutely perfect here. This is a tea I would love to pick up as a morning thermos tea, but I really can’t justify that. At all. Sigh! At least, as long as DT doesn’t discontinue it or something…

So tonight the wife dragged me to a NaNoWriMo planning session. Woo >.<. Anyway, a tea break was announced and a bunch of us headed up the street to DavidsTea. I asked for Check Mate, but was told they didn’t have that tea (liiiiiiiiies). This was not my usual DavidsTea and I was saddened. Anyway, I got some of this instead, but only got a few sips in. We had dinner at a burger joint, and my tummy didn’t like the combination of 8oz of beef and blue cheese. I ended up dumping it, because it was just further upsetting an already upset stomach. Sadness. Will try for a better tea day tomorrow.

Sorry to hear you weren’t feeling good. I am, however, envious that you live somewhere where there are tea shops. I guess I have to move to Canada for that.

I’m in Toronto, there are tons of tea shops here. It’s very dangerous ;) However, in the States, you have the option of free shipping from a lot of companies, which is quite awesome!

Odd. I expected tons of caramel but I’m mostly getting spicy orange. But not as cinnamon/orange as some of those teas out there – it’s no Market Spice! I can see why this would have been part of the fall/winter collection though – it’s very comforting on a colder day.

I wish I could have tasted the mulberries though. I think Gold Rush is one of my favourite DT teas because of the golden mulberries.

And thanks to Heather Martin for the sample!

Thanks LiberTEAs for this one :)

I have been wanting to try this one. I will say it smells amazing! I see there are reviews all across the board for this one tho! I am not sure what to except, perhaps, that is better tho!

Prior to infusing the dry aroma was fruity and spicy but also quite caramel-E. I liked the aroma very much! When I started infusing the smell of the spice and citrus came out more! Again, I really like the scent! After infusion – liquid only – the aroma smells much like a chai.

The color post-infusion is a medium dark for a black tea.

In order of appearance taste-wise – I am tasting: Black tea then berries of some sort, then spice, then caramel, then spice, then citrus, then a bit of tartiness, then cinnamon, then mulberry, then a spice/black tea combo on the end of the sip. There is a little bit of cinnamon and berry flavor that lingers with the caramel onto the aftertaste.

All of the flavors were identifiable individually at some point during the sipping experience but they also seem to work well – for the most part – all together, too! At times the Golden Mulberry “Tartness” was a little the “town gossip” interrupting a serious conversation…it all seemed to work out at the end. I am glad the flavor intensity of all the ingredients was were they were at and not more intense or that would have changed my overall rating drastically. I think this is a “Ballsy” move on DavidsTEA’s part! I appreciate the creativeness of the flavors and how flavors interact like a conversation with each other…with an intro, a climax, and a conclusion.

The more I sip the more I like of this one! It’s a conversational-tea and quite memorable whether you like it or not. It just so happens…that I enjoy it! Interesting offering! Neat Tea!

Thanks Krystaleyn for this sample!

I think some thing went wrong with this one. I get the orange, cinnamon and caramel. There is some thing bitter in here. I may have steeped it wrong. We also had to rush off to the store to fix a toilet part right as I was brewing this. Le sigh. I shall visit it again some other time.

Thanks again Krystaleyn for your generosity in swapping with me.

Awwww, sad :( It shouldn’t have been bitter. I think it needs only 3min. Oh well – sometimes there are mistakes! Did you at least eat the mulberry? :P

Lol yes! I had to dig it out of my tumbler, which is stingy and uncooperative. It was a weird bitterness. I really felt like the problem was it needs to be warmer when I drink it.

Blech! What went wrong with this one? It smelled delicious in its innocent little baggy, but brought about a decidedly murky-looking and -tasting cup. I could smell the mulberries and the caramel but I couldn’t taste either. The spice was definitely upfront but it wasn’t a good kind of spice. Just muddled and a bit dirty-tasting.

I steeped this one for somewhere in the suggested time range, which I don’t normally do. I was scared of it lacking flavour so went with the longer suggested time, but a hint of bitterness tells me I should have gone with my gut and kept it shorter. Hopefully that will improve this!

I agree. I thought this one smelled great and I would love it but the cup I had last night I couldn’t even drink it all. It was so gross. Not sure if I am willing to try this again.

Another big thank you to Krystaleyn for all of the samples!

We may not have got to this tea in time to save it. See, while we were brewing this tea, the toilet mechanism downstairs magically broke. A trip to the store and a amateur home repair job later, and this tea is kind of a cold, bitter orange disaster. I kind of want to give this tea a second chance sometime (it’s orange and cinnamon, what’s not to love?). But today was not it’s day.

I feel like you would like it if done right. It’s similar-ish to Glitter & Gold, but definitely caramelly. When I steeped it up the last time, the smell emanating from my used teaball had me drooling the whole time I was in my office.

This is a strange tea!
I’m thinking either you’re going to love it or HATE it, it’s one of those teas.

The dry smell is VERY citrusy – that’s the first warning haha. I didn’t expect so much orange, but then I thought maybe the inspiration for this tea are those clove-stuffed oranges some people hang in their homes for potpurri?

The taste is not as citrus-y, but it’s still the main component. I saw some strange fleshy things in the mix and got scared, then looked it up – I guess that’s what a freezedried mulberry looks like haha!

It has a hint of caramel and a perfect balance of spice. It’s not my favorite tea, to be honest, but I really think this will be a favorite for some and a loathe for others. I should note that I added a splash of cream&agave after the first few sips to mellow it out a little, but I love black/spiced tea with cream so that’s my weakness.

Just wanted to get out there that this is more of an orange spice tea than a caramel spice tea! There, my good deed is done for the day haha. Off to resteep.

Totally more orange than caramel, which is sad because I don’t really enjoy orangy tea… T_T

I know right? Did you just get the 25g? I find it’s an alright one to have a bit of every once and a while. Like maybe once a month? haha. Or maybe a good gifting tea! I sent the rest of mine off to Alana in jolly ol england:)

I made a 4C pot out of the last of this sample and shared with the hubby. I really have not completed the learning process for my tea pot… I might have to go back to a botum to make tea, because tea never seems to steep properly in my tea pot… Maybe it is the basket?

I was a little afraid of this tea because I had read a couple of negative tasting notes, but, I decided that I was going to go for it anyway and give it a try.

It smells wonderful – both the dry leaf and the brewed tea. My tea didn’t brew murky-looking … it looks like black tea to me. First couple of sips: ok… but some of the flavors seem a bit obscure, so I decided to add a little sugar to the cup. This did the trick.

This isn’t my favorite caramel tea, or even my favorite spiced tea, but, I am enjoying it. I can taste the berry tones, the caramel tones and even the spice tones. The black tea is a solid background of flavor, not too strong, but pleasantly brisk. Each of the flavors are light, the spices are a bit more prominent than the fruit (I taste both orange and berry) or the caramel. These are lighter flavors but still they are there.

I like this. Sorry to disagree with some out there, but then again, I’m glad that I didn’t have a poor experience with this too!

Sorry to scare you before you’d tried it! I’m glad you had a good experience.

No need to apologize. It’s one of the built in dangers of a website like this… but I really love reading other people’s thoughts on teas, because I learn so much from the experiences – not just my own but others too. It is also wonderful being around so many people who love tea!