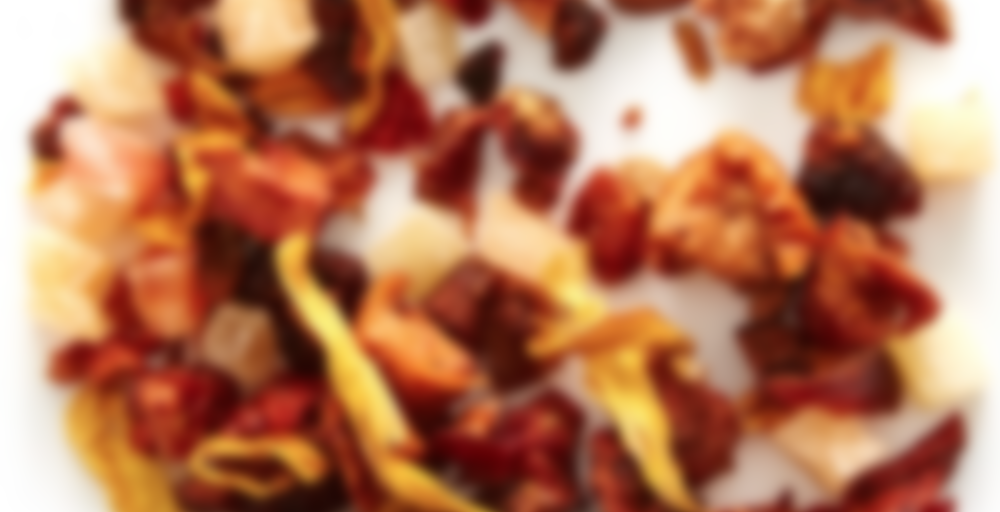 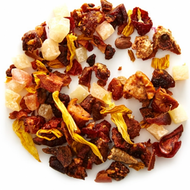 One morning, we found this tea nestled in our favourite pear tree. It was fresh, delicate and still dewy from last night’s rain. So we took it out into the warm sunlight and waited until it grew deliciously plump and juicy. And once that fruity aroma kicked in, we knew it was ripe for the picking. Ready to get a taste? This mouthwatering infusion balances the sweetness of Anjou pears with papaya, pineapple and a floral kiss of sunflower blossom. Refreshing hot, iced and all year round, it’s pure pear-fection.

This is nice. Gently pear-flavoured, somewhat floral, sweet, and for the most part, uncomplicated. No hibiscus. Drinking it cold, which is probably the better way to have it, anyhow. The only issue I’m having is that there’s an artificial note that appears in the aftertaste, which is unfortunate as that is therefore the memory you are left with of the tea. It’s probably no worse than bottled beverages, but I don’t like it.

Not a favourite, but not bad for a fruit tea. I particularly approve of the lack of hibiscus.

Another old DT tea from many years ago. After this, I think I only have one such tea left and it’s already cold brewing in the fridge!

Anyway, this tisane. It’s not bad, but I find it a little light on flavor. I do appreciate that there’s no hibiscus, so I can taste the fruit flavors better. I mostly get apple and peach with a bit of pear, and perhaps the pineapple? It’s somewhat muddled, but overall a pleasant golden infusion. I don’t even mind the stevia, as it’s very restrained for DT. The tartness of the apple helps set it off nicely.

So it’s pleasant to sip on, but not something I would buy. Though I’m not sure there are any fruit tisanes that fit that description.

I had to leave work a bit early today for No. 2’s teacher conference. It’s too early for dinner, and yet, I’m somehow starving. But, since I discovered this morning that I gained 5 lbs since the last time I weighed myself, I am back on the program in a big way. Which means no snacking.

Instead, I thought I’d have some herbal or fruit blend on the theory that the liquid might help curb the hunger. Or at least that by the time I’d made , drunk it, and written a note about it, it would be time for dinner.

The chunky mix in the packet smells enough like pear, though I’m also smelling the papaya, pineapple, and peach flavoring. I over"leafed" significantly given the chunkiness.

The mix makes a liquor that is canary-yellow and translucent though not clear. It smells like pear (sometimes) but also like apple and oddly, a little like cinnamon even though there is no cinnamon in the blend that I can see.

The flavor is very, very sweet. Candy sweet. But the pear is definitely there, and even more in the aftertaste than in the sip.

I’m with those that say this isn’t my favorite pear blend, but it’s still a good one.

Wanted to get 2 oz of this before it retired since I enjoyed the sample I had once upon a time. The flavor is light, and I could totally believe that it’s pear. It’s refreshing, sweet, and so lovely to drink. 2 oz of these heavy fruity blends disappears quickly, so I’ll be saying goodbye soon.

This tea is a little more faint and light than I expected it to be, and almost had a slight hint of chamomile. Lots of floral notes can be found in this tea, and it’s almost as if they float around your mouth after you’ve taken a sip. However, the predominate flavour, for me at least, was peach. I would suggest steeping it for longer than five minutes, and with hotter water than I did. Otherwise, I would drink this with a friend over a dainty lunch, so that the fleeting nuances of flowers and peach are not lost.

I liked the fruit flavours on the front of the sip and then the stevia took over. Blech.
Why do they do that?

I truly hate stevia in my tea. At least, maybe I wouldn’t mind it if I were allowed to decide how much to myself. But I generally prefer unsweetened tea. Stevia is a buzzkill for me.

You and me both. Clearly, we are not their market.

This one is… interesting. I don’t dislike it (actually I do enjoy it a fair bit!), but it’s not at all what I was expecting. Opening the bag, I was met with a peach smell. Interesting, considering “peach flavouring” is the last ingredient listed. But I shrugged it off and assumed it would be like many other teas I’ve had – smell one way, taste another. But in drinking it, I’m primarily getting peach too. It’s mixed with…. something that I can’t quite put my finger on, but definitely peach. Luckily, I enjoy peach, and will happily drink this one again. Perhaps next time it will be slightly different, as other reviews have suggested.

I have really enjoyed this tea! I is sweet and light and simple. I was a little worried about this tea at first but it is easily one of my favorites from the new harvest collection. It is similar to peach tranquility from teavana because it’s lighter. My only issue with this tea is the stevia, I’m not a huge fan of the stevia that keeps getting added to teas.

Strange, clean, plasticy taste with some pear aroma and too much apple flavoring.

Not my favourite pear offering from DAVIDsTEA. After two rounds of iced Pear Blossom, I don’t think I’ll be picking up more. The dry leaf smells more like pear than it tastes. In flavour, I get a mix of pear, pineapple, and artificial peach. I think it’s that artificial peach flavouring that has been added that especially screws with the overall pear-ness of this blend. Then there’s the stevia, which while isn’t nearly as bad here as in other blends, the blend could have easily done without it.

Speaking of, I found a massive Bosc pear at Safeway the other day. Those are my favourite, but I’m curious how this one will taste because it’s quite literally the size and shape of a grapefruit, so way larger than an Asian pear too, which is something else. Looks nothing like a pear but still has that classic Bosc pear skin on it.

This blend makes me miss the Poached Pear blend from last year, which had cinnamon sugar doughy notes alongside a green rooibos base, and of course, I’m also a fan of Ginger Pear. This one is so flat in comparison. There’s worse, for sure, but there are better pear teas out there, in my opinion.