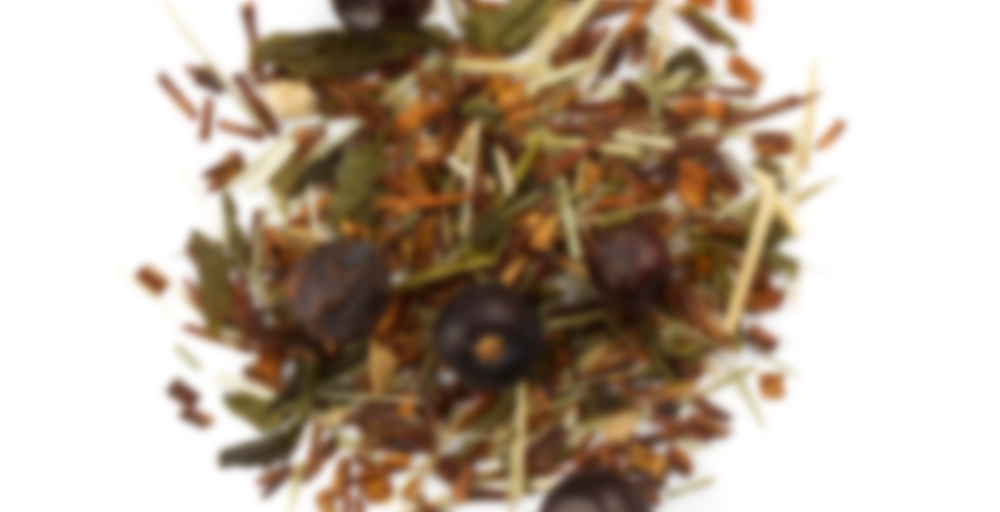 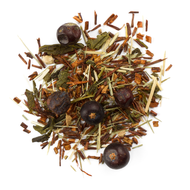 with 119 Ratings Rate this tea Rate This Tea

Need a system reboot? Got a new years resolution to live up to? Try this tasty blend of traditional ingredients, like rooibos, sencha, ginger, ginkgo, lemongrass, and juniper berries. Trust us, even buying it will make you feel like a new person. Not working? Just go back to bed. (MK Kosher)

Today, I love you. Last time, I didn’t. I wish I weren’t so wishy-washy, but, hey, what can I do? Today you are soothing, comforting and warming. Convincing me that my sniffles are not real and even if they are, you will kick their butt. I have spent the last 8 days at my grandmother’s without any legit tea and you are a wonderful way to return to the fold. You make me happy in these sad days after my grandfather’s funeral and you even remind me a bit of my beloved gin, of which I should very soon partake.

I really need to try this one. It sounds interesting.
Sorry for you loss.

Sorry for your loss.

So sorry to hear about your grandmother.

Oh dear, please accept my condolences to you and your family xx

I’m sorry to hear about the loss of your grandfather. Take care.

Detox tea + some kind of liquor (gin? vodka?) = a hangover’s cause and cure in one cup! Try it. And I’m sorry for your loss, hope you’re doing okay. <3

The in-laws strike again! And a significant number of my drinks yesterday were decidedly Not Tea (St. Paddy’s)….the wife and I are going on a bit of a Detox binge. This has become my go-to tea, it’s so delicious, I’m happy to sit here and sip it all day.

The beau and I enjoyed green beer last night, and detox this morning as well : )

ps – I intend to re-steep the “leaves” when I get home to see if it really does re-steep well! (in my opinion, that is :D)

Ha! We went by DT while I was still mostly tipsy and got a tin of detox with the pretty green label. I love resteeping the heck out of it, but I also resteep black teas, which is apparently a huge no-no so shrug I am not to be trusted ;)

I also re-steep black teas…I like the way you think! However, I do use way less tea to liquid than directions suggest, and go for a longer steeping, most of the time. I’d rather get more delicious cups than fewer quick cups.

I’m getting a little excited now about this re-steep when I get home, hopefully my leaves weren’t thrown out by the beau as they sometimes are. Although it would only be an excuse to brew another pot of it…

I could drink Detox for days and not tire of it! And I’m with you on the less leaves/longer steep thing. Makes the tea last longer too! I’m in no rush.

I went to the fair this weekend and indulged in some awesomely wacky treats, including a hot dog topped with poutine and maple bacon funnel cakes with whipped cream! There was supposed to be deep fried butter but sadly I couldn’t find it. Yes, I know it’s a disgusting concept but I was so curious!

So after all that madness, this tea just seemed like the right thing to do. Thanks Janelle for sending some my way. It actually tastes better than the name implies, although I wouldn’t crave it based on the taste. It’s gingery and lemony and if it weren’t for the rooibos I think it might actually taste good, but I guess it’s part of the remedy? Regardless, I think it made me feel better…even if it’s just in my head, I’ll take it!

Fair food is just nuts. :) I always eat too much of it, too.

a poutine topped hot dog? never heard that one before! lol. deep fried butter? i might have sniffed it, lol, but i couldn’t have eaten it…

I know, I get so carried away with all the options! Yeah I’m sure the deep fried butter is a heart attack waiting to happen but I still wanted to try just a bite! Lol

Oh man! My stomach would definitely be in pain with all the fried food, but it sounds so goooood! :-)

I’m still really impressed with how tasty this one is considering it’s a detox tea. All Detox Teas sound be this tasty! More people would looking to detoxing!!!

Nuts. Literally as I plopped the infuser into near-boiling water, it occurred to me that there was green tea in here…. argh. Hopefully it isn’t ruined!

Luckily, I think there’s a small enough amount of green tea in here that it’s ok. Whew! I had forgotten that I actually didn’t mind this tea; it was Exotica(?) that my roommate and I didn’t like, I think. I’m also more open now than I used to be, haha.

This tea is slightly lemony from the lemongrass, which I apparently no longer really dislike in teas (I think I just had to get used to the idea), and I can taste the rooibos but it works quite well here, just sort of a woody flavour. And if it tasted a bit medicinal, it would probably fit in anyhow.

I can definitely see that this tea would be nice and refreshing to drink after a night of overindulgence, although that’s not really my style anymore, so it’s ok to keep this out of my cupboard :)

wow i really should drink more of this.
i really like my two bold green blends from Davids (this and African Mint) but they tend to always be put second in line to my other teas. i can’t explain why. but maybe today’s sips will be the wind of change.
i spontaneously went out for some beers last night so having green balancing teas like this are obviously a good idea today. lemony and fresh. i bet this will also be a good iced tea. and even though i tend to prefer my teas hot, this one still has spring written on it’s leaves.

Bleh. Do not want.

BUT. It works like a charm. And I have digestion problems already… so I should probably invest in this tea since straight puerh doesn’t settle my tummy like it does for others.

Won’t rate it for taste though n-n;

What about ginger pu-erh or the skinny?

I haven’t tried the ginger puerh, and the skinny wasn’t my thing –
but I will def give it a try! I’m getting ready for my Halifax move though, so I’ve forbid myself from buying any more tea until then. :( sad!

Oh Detox, you are a girls best friend the morning after when she gets home still a little drunk and missing half her costume (I was still decent).

I don’t know what is in this but it tastes amazing and I’m almost ready to nap headache free.

I really like this tea – very yummy! I like that its a blend of green and rooibos teas. This is my first tea of the day during the week at work. I don’t really taste the juniper berries too much but perhaps it’s because of the lemon flavoring. I will always have a stash of this tasty tea at work!

So, Doctor says I have shingles… which also means that I’m feeling pretty lousy. Hopefully the tea will help, even just a little.

sorry, I hope you are better soon!