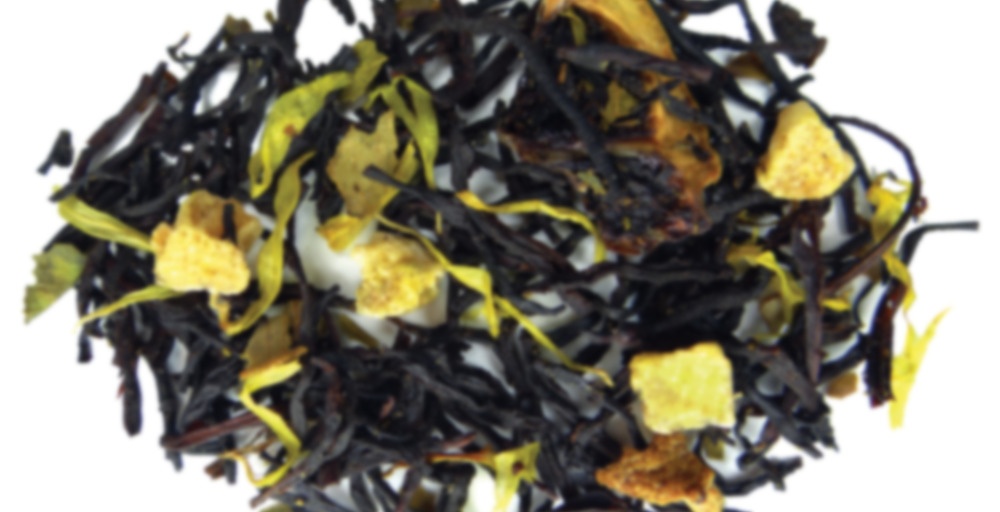 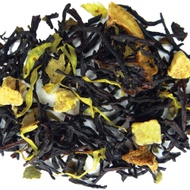 by Fusion Teas
77
You

Transport yourself to warm, summer days with the next best thing to a slice of key lime pie. This is a pleasing and healthful black tea blend of lime leaves, lime juice, lime pieces, and sweet candied pineapple. Delicious hot or cold.

I am sipping this warm at the moment, but I think I may have to brew some of this for some iced tea. As it cools it becomes more and more refreshing.

This is really good. I love the lime in this, it is tart, but there is a sweetness to the overall cup as well. The Ceylon is a mellower tea, smooth and satisfying but not what I’d call overly powerful. This isn’t the kind of tea with which to start the day, but, I didn’t expect it to be, either. It really is very well flavored – a nice amount of lime, but not so much that it overwhelms the palate or the tea. A hint of pineapple, and most of all, a deliciously smooth Ceylon base.

I have been waiting for a warmish day…. The first time I tried this tea, I steeped it up according to my usual mug method. It was bright and limey and reminded me of a margarita. Then the wheels started turning in that this would make the most awesome, refreshing iced tea. Today is the perfect day. We are working outside and it is going to get up to the 80s. I brewed this up using my iced tea method (double strong, pour over copious amounts of ice…) and what I have now is the best iced tea EVER! I love how the lime flavor is incredibly refreshing, and the pineapple and stevia leaf make it ever so lightly sweet. The Ceylon adds a light briskness. Perfect on its own. I need some!

Thank you to Thomas at Fusion Tea Room for the sample.

Ohhh…. curse my lack of seeing this when I was requesting samples! Sounds delicious.

It really does. I’m not big on flavored teas, but the addition of key lime to iced-tea-bound Ceylon sounds absolutely perfect.

Thank you Veronica for sending a sample of this my way!

When I think of lime teas, my mind immediate goes to the deliciously tart creaminess that is Lime Chiffon. I get very excited and want to try them all. However, I need to remember that key lime does not equal creamy lime deliciousness. Alas, this tea has fallen victim to my lime tea hopes as I found myself rather disappointed. The sad thing is the lime flavor in this is actually pretty accurate to the fruit and it goes nicely with the base. However, that is all there is – lime flavor and black base. A tad bit boring when compared to my beloved Lime Chiffon.

Key Lime Ceylon Tea, you are just not doing it for me. It is not you, it’s me.

Yeah, this wasn’t my ideal lime tea either which is sad since it’s a decent tea.

This tea was ok. The lime flavor was there. It didn’t have an artificial or candy-like flavor. The Ceylon base was smooth. There was the bright zing I’d expect to get from a lime flavored tea. But even with all of its good points I felt pretty meh about this cup. I’m thinking it’d be much better iced, but I think this one is going in the swap pile so I can pass it along to someone who’ll love it more than me.

Bah…for some reason my earlier note didn’t come through.

Good tea – very mellow with interestingly layered lime flavour that was just as nice in the second cup as it was in the first. Thus far I approve of the tea and I’ll definitely be considering adding some into my next order.

Sigh. Maybe this tea will bring on Spring already. This has a nice base for a Ceylon. The scent reminds me of lime scratchnsniff stickers from elementary school. I’m not sure if that’s a good thing! The flavor is nice though. Not really PIE but plenty of lime. This would probably make a wonderful iced tea. This reminds me of the Della Terra lime/lemon teas, but those have a creamy flavor… so those are better! There was one really odd thing in the dry blend, I couldn’t tell what it was. It looked like the middle part of a flower. It floated. It could have just been a piece of lime or something.. not really familiar with limes. Hopefully it was something that SHOULD be in tea. (ahem. Teavana and your bird feather debacle.) The second steep was just as limey!

When I think of key lime, I think of a pie made with fresh key lime juice, a graham cracker crust and a little whipped cream on top. I think the description of this tea even mentions key lime pie. When I took my first sip, all I could taste was lime juice. It was a fresh, tart lime juice flavor, but rather plain as that was the only flavor. Then I decided to add a little sugar – that made the sweetness of the lime and stevia come out and it tasted like limeade. Then I thought, what the heck, and added a little milk. Bam! Now it’s a cup of creamy limey flavor that tastes like a real dessert. I like that I can still taste the tangy lime juice but it’s not overwhelmingly tart or too boring. This is making me want a slice of real key lime pie! Thank you, VariaTEA, for this sample!

I want pie now, and I don’t even eat pie! But I love lime. I adore Grosche’s Key Lime tea, a true lime taste that is also spectacular served iced, wonder how they compare.

I haven’t had a lot of luck with fruit flavored black teas (aside from Earl Grey variations), but this was pretty good. As someone else commented, Ceylon tea is a bit mellow so maybe that’s why this works with the fruit flavorings. Not as much zing as a herbal tea, but satisfying when you need a little pep from a black tea.
This was from Travelling Tea Box C and was added by Chuckieroy.

I decided to go with this tea as my first tea of the day. A beautiful day, I might add. I must have had it before but I don’t remember anything about it. I really have to sip this one down, it’s one of the older teas that I own (5 months old?).

However, as soon as I opened the tin, I realized why I am so reluctant to have this one… Because it smells godawful. There’s this extremely artifical smell that the leaves and, subsequently, the steep have. I tried not to smell it. It was like… a bunch of lime zest that you just found under an old carpet.

The flavor was slightly better but there was still so much of fakeness to it. On the whole it tasted like some kind of earl grey cream gone very wrong. Because you get this lime that tastes like a really nasty bergamot and then there’s some creamy notes – which was the only thing that positively surprised me about this tea.

Fusion Teas have some really awesome offerings (Caribbean Nectar Rooibos, Raspberry Champagne White) but this, IMHO, is not one of them.

“under an old carpet”? I don’t even think I would try the tea if it came out smelling like that!

haha, right? I might just give this one away one day.