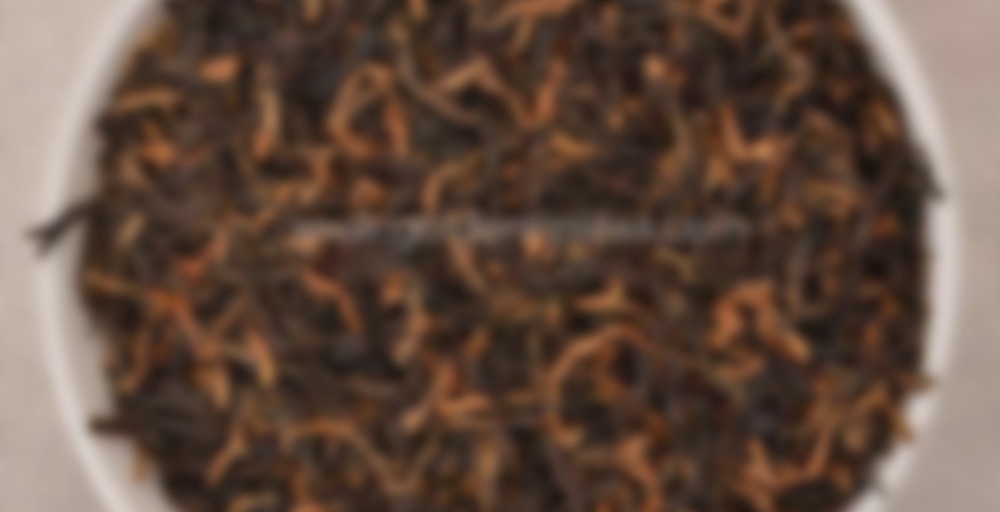 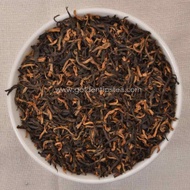 An exquisite Assam tea hand-blended by our expert in-house blenders. Manufactured from premium second flush teas sourced from superior plantations in Upper Assam, this tea is intricately manufactured to perfection with an array of golden tips spread evenly. The aroma is woody and has a delightful scent of dark chocolate & caramel perfectly blended with a full-bodied maltiness, typical of exclusive Assam teas. An excellent tea with a rich, complex character and among the finest Assam teas.

I made this tea last night; it’s a very aesthetically pretty tea with lots of golden tips throughout. I’d say the ratio is probably somewhere like 1:3 of the leaf is tips which certainly isn’t bad. The brewed up liquor was very dark; almost opaque in colour actually. To me, that definitely signified that this was going to be a strong, full bodied brew.

And it certainly was; in fact it was a little rough in addition to have a strong, brisk flavour. There were definitely very characteristic Assam flavours present like malt and a dark chocolate. It was a little bittersweet; perhaps in part from the chocolate notes and maybe in part because of the rougher overall mouthfeel/taste of the tea. This is possibly from over steeping, though if that’s the case then I’d say I only very slightly oversteeped – which would mean this is a more finicky/picky tea.

Other notes I found present were a kind of coffee grounds flavour, and somewhat of a ‘stale’ graham cracker flavour. Overall, not the smoothest Assam but good regardless. I think it’d definitely be a good candidate from a splash of milk, and morning consumption rather than evening.

I wanted to review this one on SororiTea Sisters but I couldn’t find the tea company it’s from online; if anyone can point me in the right direction that would be appreciated.

I thought so, but can’t find a tea by this name on their site.

They don’t have it at the moment. Makes me sad because I’d like some more. It is from Golden Tips Tea Co. and the link is right.

Actually I think they just added it back! In the new arrivals section: http://goldentipstea.com/collections/new-arrivals/products/assam-enigma-second-flush-black-tea

Nooooo…. and they have a sale this weekend!

I’m half way through my Golden Tips samples now! While I love Assam, I’m trying to space them out between other teas as I try each one for the first time, so that I can get an accurate impression of the flavour, rather than just a comparison to the one I drank previously.

This is a second flush assam, harvested in June 2014. There looks to be about a 50/50 split between wiry, black-brown leaves and slightly downy golden leaves. There are also some golden tipped leaves. The scent is malty, maybe a little woody. I used 1 tsp of leaf for my cup, and gave it 3 minutes in boiling water. I added a splash of milk.

The one thing the scent and appearance didn’t prepare me for at all was the flavour! Usually it’s possible to get a rough idea, but this tea was a complete dark horse. From my observations of the dry and brewing leaf, I was expecting a fairly generic assam, strong and malty but perhaps not with many distinguishing features that would really mark it out. I was totally wrong. The mild chocolate and smooth caramel notes are obvious from the very first sip. They’re not strong, in your face flavours, but they’re definitely what this tea tastes of. The ubiquitous maltiness emerges in the mid-sip, and adds a sweetness that helps to define the chocolatiness still further. There’s a light woodiness towards the end of the sip, so I wasn’t completely wrong, but it’s not at all the defining flavour of the cup. I’m pleased also with how smooth this assam is; there’s no hint of astringency, and neither is it particularly tannic. Just perfect for my tastes, then!

This is a tea I’d repurchase, if only for it’s beautiful chocolate and caramel notes. It’s certainly an assam like few others I’ve tried.

hard to tell the difference between the assams some time, but I also like this one!

I received a very generous package from Nicole yesterday and had to dig straight into this tea this morning since I’m dying to try it after her review. Brewed the tea has a decidedly woodsy scent with a touch of malt and what I think is very very delicate mushroom.. When I close my eyes I imagine a dense overgrown forest towering above me and picking hen-of-the-woods mushrooms in the dappled afternoon light…. But at the same time there are some cocoa and dark chocolate scents peaking through as well… It sounds a little strange but smells amazing! Taste wise this is pretty much on par with my last sentence! The tea is smooth, it’s complex, and it’s malty. It’s got that slight woody taste combined with the cocoa/chocolate notes and a hint of caramel sweetness. Im sad that my cup is now empty…. Thanks for the share Nicole I’ll be picking some of this up soon for sure!!

Trying the 2015 version this morning. I had been avoiding opening it until I used up the 2014 but I couldn’t help myself any longer. This is the 2015 Summer blend.

Pure brown sugar and molasses with enough bite to make you know you have a tiger of an Assam blend. Followed my normal method of Western steep at just off boiling for 3+ minutes then let it cool for about 5 minutes. That step of cooling from scalding hot to warm seems to make all the difference in bringing out the malty, sweet notes in an Assam, at least for me.

It’s been so long since I had GTT/Vadham’s Signature Malt Assam I can’t remember which one I preferred – this one or that one. But this is a wonderful Assam.

Yeah… I really need to work on expanding my descriptive vocabulary. There are things going on in this scent that I just can’t describe.