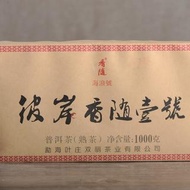 Hai Lang is just so in love with Bu Lang teas and has been a big part of the push to use high quality wild arbor teas from Bu Lang to produce premium ripe pu-erh teas. The spring teas from 2013 and 2014 were wet piled in late 2014 in a Menghai area tea factory for 45 days.

Medium-light degree of wet piling has preserved much of the original character of tea making it a highly textured drinking experience. Strong, dark, and pungent, this has notes of chocolate and cherry, with a long lasting mouth feeling and strong cha qi.

I’ve had this tea a few times now and it tasted very different than my first session. Now I’m finding no chocolate notes. Just really smooth and clean, sweet and nutty. Like me. Still a great tea. Where’d the chocolate go? I wonder if chocolate is a form of fermentation flavor. I’ve noticed it dissipating in other shus as well.

My first Hai Lang Hao. I’ve had a sample of this sitting in my pumidor for over a month now, I think. Since I was lucky enough to get a corner piece, I decided to use that one and just a few of the loose bits at the bottom of the bag to round the amount in my 160ml Jianshui teapot to 11g. Both the smell of the dry leaf and wet leaf after a 10s rinse were a very typical shu pu’er aroma with maybe a hint of sweetness in there somewhere. I didn’t really pay attention to the early steeps, but in later infusions the liquor itself smelled of clean raw fish fillet with the skin still on.

After giving the leaves ten minutes to soak up the moisture, I managed to prod the big piece to come apart with my finger with less difficulty than I’d expected. I proceeded to do eleven infusions, for 10s, 10s, 10s, 15s, 15s, 20s, 30s, 50s, 90s, 2 min. 30s and 3 min. 30s respectively. The first infusion brewed quite cloudy, but also quite a lot darker than I would’ve expected. The subsequent infusions brewed crystal clear as far as clarity goes, though, and it is possible that the cloudiness was caused by hairs floating in the tea soup as I noticed clumps of beached hairs at the edge of my cup after I was finished with the first round.

I could tell that this would be a great tea from just one small sip, and spoilers, it was. The flavor was strong, yet also very round and soft. My cup already raised to take my second sip, I put it back down, because I wanted to fully enjoy the long-lasting finish this tea has. This is a tea you want to take your time with and savor. The taste was chocolatey, with maybe hints of coffee. The tea wasn’t super thick or viscous, but it still had a decent body/mouthfeel. The texture was perhaps just a tad grainy.

The second infusion brewed very dark and now had a much more prominent coffee flavor, but without any sort of bitterness. The chocolate was virtually gone from the tea. The flavor continued to be strong, especially for a shu pu’er, but retained its soft and round, full-bodied character. The aftertaste was even longer lasting than before and seemed to only grow stronger over time. The viscosity remained low while the mouthfeel also remained decent. Both this and the first infusion shared a slight underlying sweetness even though at no point was this an inherently sweet tea.

Having not lengthened the steeping time for the third infusion, the tea brewed dark, but not quite as dark as before. This was also reflected in a lighter taste. The flavors were relatively typical ripe pu’er flavors, ones I have difficulty describing. The tea gave me the impression of being in transition between lighter and darker flavors. It still retained most of its prior round smoothness, while the texture/mouthfeel actually improved. In its finish the tea may have actually felt slightly syrupy. Lengthening the steeping time for the fourth infusion produced probably the strongest infusion yet and brought a small return back to the darker flavors. I’m often not a fan of darker flavors in tea, but here they didn’t bother me at all, which actually seems to be the case with most shu pu’er. At this point my tasting notes read: “Excellent tea.”

For the fifth steeping I didn’t dare to extend the brewing time. This produced a slightly lighter color, which was still quite dark, however. Instead of the prior reddish brown, the color was now a beautiful red. The darker flavors were starting to taper off, while one could notice some more sweetness creeping into the tea. The long-lasting aftertaste from previous infusions was retained still. Having lengthened the time for the sixth steeping, the tea brewed about as dark as before. The flavors were now getting lighter, while the strength of the tea remained about the same as before. This steep wasn’t particularly sweet, but what I got from it were berries.

The seventh steeping brewed a still quite dark red. The texture was noticeably thinner. The flavors were even lighter now, with the tea tasting like sweet water. While the brew seemed simplistic at first, it turned out to have more complexity to it than might’ve appeared at first glance. The berries were still somewhere in the mix, and I could almost say I tasted a light toffee note in there somewhere. There was also still some darker stuff present in the finish. While there wasn’t really a lasting aftertaste in the tea anymore, this steep did leave some aromas lingering in your mouth. Overall the tea wasn’t as excellent as before, but still quite pleasant and drinkable.

The eighth infusion was an improvement over the last. It tasted like super smooth kissel with a hint of milk/cream in it. Even the texture – especially the finish – was reminiscent of said dessert. The flavors were light, but very smooth and full-bodied. My notes read: “Such a superb tea.” Steep number nine produced still a quite dark liquor, even if the color was getting lighter. The note was light, but I definitely tasted strawberry in this steep. In addition to extending the time, I filled the teapot with slightly less water for the tenth infusion. The resulting flavor was surprisingly strong and the strawberry was replaced by the taste of black currant leaf juice. The eleventh steep I brewed with even less water, pouring hot water over the pot from time to time to keep up the heat. The color of the liquor was once again a couple shades lighter than before. Even though I’m confident the leaves could have still gone on, at this point there was practically only basic sweetness left and I decided to stop here.

Ripe pu’er is the one category of tea I’ve had difficulties getting into, but this tea was excellent. The material is clearly very high quality and the processing has been done expertly. This tea is perfectly drinkable right now. Not only is this the most flavorful and strongest tasting ripe pu’er I’ve drunk, it manages to somehow combine that with the best longevity I’ve seen in a shu pu’er as well. It’s the best of both worlds with no drawbacks. Even though the mouthfeel was decent, it was not on the same level with the other attributes of this tea. That is the one area where I hope this tea might improve with age. Flavor-wise I found this tea very enjoyable, even if the flavors are very typical shu pu’er flavors. The strength of this tea is how it delivers those flavors instead of what those flavors are specifically.

While I know a brick of this currently costs $245 on Yunnan Sourcing, I think this tea actually represents a great value. While this tea is $0.245/g which is well above most moderately priced ripes, I found it to be way better than twice as good as teas that cost around half as much. I know you can get a pretty fancy raw pu’er for that price, but if ripe pu’er is your thing, this tea is definitely worth ordering a sample of. All that being said, I’m not sure if I’ll be buying any sort of quantity of this tea for myself. While this tea was excellent, the one thing it perhaps lacked was that something that made it feel special. This would be an excellent tea to brew or recommend to someone as an introduction to how ripe pu’er tastes. As an experience, it’s probably up there among some of the best teas I’ve had, but if I were to keep coming back to it, I think I might want there to be some sort of hook that makes it feel more unique. I will have to keep sampling other ripe pu’ers and come back to this one after I have a broader sense of the category as a whole. If it still holds up as one of the best ripes I’ve had, then perhaps I will have to buy it.

This is a very tasty tea. It started out on a bitter note. There was a fair amount of fermentation flavor but I didn’t really notice it. Slowly over the course of fourteen steeps the bitter note turned to a sweet note. I would have to say it had a bit of a nutty flavor to it. Mushrooms might be another possible interpretation of it. In all it was very good. This is not a cheap brick at around $245 for a 1000g brick. I gave it fourteen steeps because it was so expensive. But it would have gone a few more. Judging by the color in the fourteenth steep I would say it would have gone at least another four to five steeps with longer times on the steep. But I lost my patience at 3 minutes so I didn’t want to keep going. Overall this is one of the best ripe teas I have had.

I think I definitely need to get a sample of this one sometime soon. It looks like it gives a rather thick tea soup, which is what I enjoy in ripe puerhs so far.

Alan, how does this compare to the 2016 Hai Lang Hao “Lao Man E”, and which do you prefer?

Is the fermentation note like a barnyard or…? Because that’s what I got off the smell of the two ripes that I tried.

Thanks for the review, Allan!