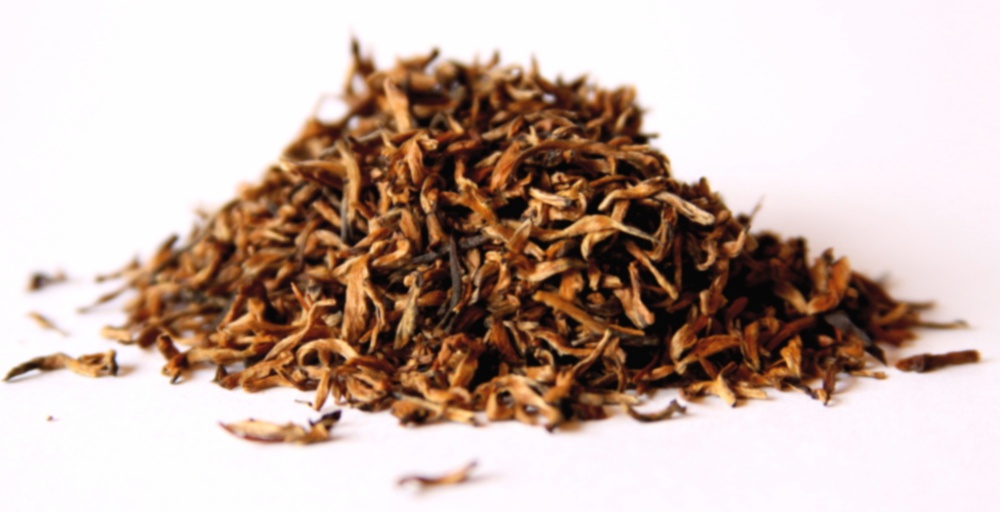 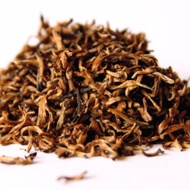 We order up this tea from the best garden in Assam: Dikom. It is difficult and expensive to make a tea that is golden buds, but it is worth the effort. It is truly a joy to behold and we enjoy its light body and whiffs of honey.

i think i’ll take another run at it before rating numerically; i’m trying to determine whether or not the heavy dark flavour of a traditional assam is a requirement for me or whether it’s negotiable, lol.

I have this one. I should try it.

the great thing about being unsure is that more attempts are required, lol!

What a problem, eh?

Sip down! It feels great. The first cup was so malty, like Ovaltine. Very full-bodied and especially tasty after I added some coconut almond milk.

This second steep is a little weird. The malt is being replaced by a green vegetal note. Yeah, in an Assam. I don’t get it. Like string beans.

This is my first cup of real tea in a few days, and boy, does it feel good to be back! I’ve been really busy and out of my house, and haven’t even had a second to attempt to drink some tea. And I’ve been coming home too late to have anything other than decaf, so I’ve just been skipping out.

This is actually my first, pure Assam. I’ve had Assam blended into other teas (like Irish Breakfast), and I was pretty sure that I could pick it out in the sea of other flavors, so I was pretty excited to see if I got it right.

Can I rhapsodize a bit on the beauty of the dry leaves? Downy and silky and pure autumn gold, most of which were unbroken in my sample packet. So. Gorgeous. And the smell coming off them… black tea roasty mixed with something sweet! A bit fruity, somewhat akin to a Darjeeling smell, but a bit lighter and less assertive.

So I steeped this one up, and the tea scattered and swirled like a tea-snow-globe. And almost immediately, as the hot water hit the leaves, the water turned a brilliant copper. The copper darkened as the tea steeped, and when it was time for the pour…

The wet leaves smell very, very fruity with a hint of a signature black tea robustness. And the infusion? Very black tea-esque, with some fruit added in. This was interesting. I couldn’t smell the signature malty smell that usually screams “ASSAM” at me.

My first sip was a surprise, because this one is damned complicated! There’s almost a muscatel, Darjeeling grape taste, followed by – there it was – a rush of malt. When I talk about malt from an Assam, I’m not really referring to malted chocolate balls like Whoppers. I’m talking more about the malty characteristics of beer. This malt was nice and robust and brisk, but mellowed out at the end. The flavors left at the end were somewhat sweet and smooth.

As the tea cooled, the fruity notes spiked a bit, and the malt smoothed out. There was definitely more of a honey-like sweetness after every sip. An almost burnt sugar taste, even. And then there was this elusive bake-y taste that would pop up in the aftertaste after every couple of sips! It was so intriguing that I kept pausing and drinking to try and draw it out. A fresh baked bread taste, which you can sometimes get at the end of a good beer, if you’re paying attention.

There were downy bits floating around in my cup, so I think I might do a rinse of these leaves next time. Or maybe those downy bits add flavor? I have no idea. Anyway, this was a great tea to come home to. Very intriguing, indeed.

I had a feeling you would like this one =P

Hee, there’s a lot to like here! It’s very malty and Assam-like, just as I expected, but there’s a bit more going on in each sip, which definitely keeps me on my toes!

I’m actually wondering if the tea I have received is off or old. I smelled the dry leaves and…nothing. No scent. My nose is extremely sensitive too. I’ve never had a tea that hasn’t smelled like something before. I ground a few of the curls up and there was a little scent, but barely.

I steeped this tea for just under 5 minutes. It tasted a bit odd. Slightly malty, but mostly just something I couldn’t put my finger on and it wasn’t very pleasant. Surprisingly weak for such a long steep.

Overall, I think I may have got a bad batch – at least, I hope so! Very disappointing. Not leaving a rating.

It was an assam type of morning. I love this tea. SO much. I’m almost running out though, so it may be time to restock! I wish the price of this wasn’t so high, but it really is worth every penny.

This tea was pretty good! It’s definitely an assam, it has all those assam-y flavours. It’s fairly light and thin, but very flavourful.

Not really a tea I’d go for again. I tend to prefer my assams to be in your face strong, taking milk and/or sugar well. I think this one would be overwhelmed with milk. If you like assam teas, definitely give this one a try.

The second steep sat for about half an hour (oops?) and it’s definitely drinkable. More sharp and tannic, yes, but it’s not overwhelming.

Aw, a little milk will fix most oversteeps with a good Assam :)

Haha. I drank it without. It wasn’t the smoothest, but it was pretty good! I think I just prefer a stronger Assam. :)

The light body and slight honey notes make this an excellent cup of tea!

I’m having another cup of this (see older notes). I think I drink this pretty much every week. It is so good! I’ll be getting a new shipment of teas from several companies soon.

I love the maltiness of this tea! It is very light, and I have an aftertaste of a strong honey. The leaves look almost the same hue of gold even after I brew it. More notes will probably come next week (I know I keep saying this), but I’m off to Colorado in the morning. Maybe I’ll even catch some good teas there!

Boiling 5 min, 0 sec
Yours I Like This
4 likes
5 comments
Edit

Welcome to my State! Hope you have a good time! If you get to Boulder there are lots of tea shops. Fort Collins Happy Luckys and Aspen has some good ones….Durango too.

Great! I’ll be in Boulder for about a day. I’ll have to visit said tea shops. And thanks for the welcome!

Ku cha, Dushanbe, The Tea Spot are a few located in Boulder around Pearl Street (outdoor mall) . Have a great time! Hot weather but not humid and cools off at night.

Thanks for the list. I hope I can find them, and good advice!

The Dushanbe is a famous landmark.KuCha is a few blocks away. All around 13th st I believe..check the places on my tea room reviews!

While the namesake bears the iconic Assam, the tea itself stands apart in body and flavor from traditional Assam teas. The flavor is mild in comparison but savory and elegant at the same time. The dominant note is honey, and without doubt even the most indiscriminate tea sipper would notice this unmistakeable sweetness on the tongue. The leaves are robust and have a pleasant appearance typical of many tippy tea and an aroma that strongly suggests a comforting sweetness. The brew is less intense than most assam offerings so don’t expect a jolt from this cup. Instead it is a smooth and more subtle experience and I find myself coming back to this cup almost as much as my go to Top Chingwo Congou. As with other high quality teas this is an expensive delicacy, and that facet may not appeal to the bulk of consumers. Nonetheless this is a stellar tippy tea.

Lovely and smooth. A good idea for those who shy away from ham-fisted Assams.