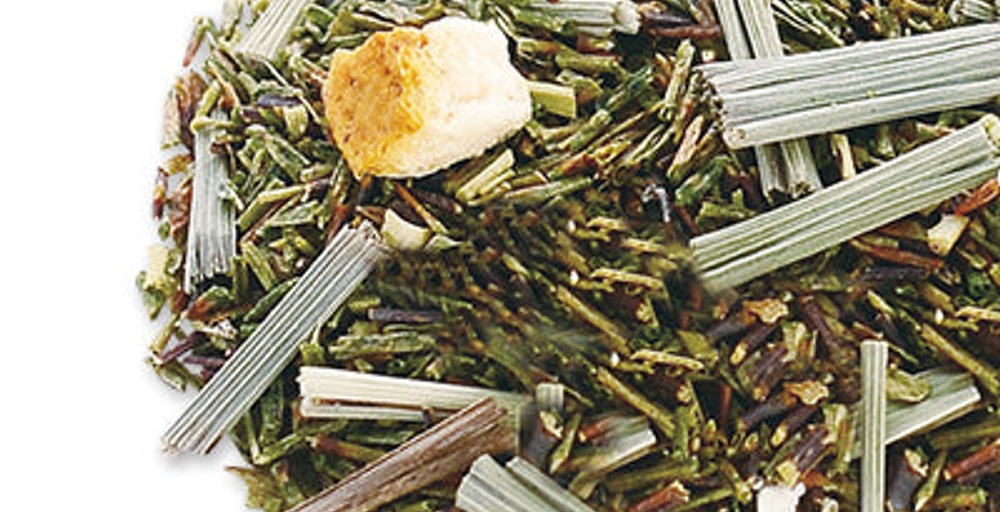 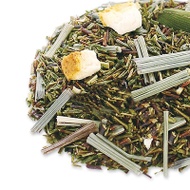 The word “adagio” is an Italian word meaning “slowly” and also has a musical term “play slowly”. ADAGIO is an herbal tea made by blending unoxidized green rooibos with the scents of grapefruit and lemongrass. Cardamon seeds also add to the refreshing flavor for calming the mind and body. Rooibos tea does not contain caffeine, so it can be enjoyed during times of relaxation.

O.k. this is the last of my new haul from Lupicia.

I have such mixed feelings about this one. I love the green rooibos and the lemongrass. I tried this first hot yesterday and I thought the flavor was really fun. The grapefruit in here really reminds me of Fresca. I was thinking this would be a great substitution for soda, especially in the summertime when I could drink it iced. I liked the flavor a lot but it didn’t sit entirely well in my stomach and made me a bit nauseous later.

I tried cold brewing it and had some of that this afternoon. Again – a similar reaction, very zesty and grapefruity, but again a bit of stomach woes. I don’t know if this is real grapefruit or grapefruit flavoring but it’s a bit too strong for Le Wimpy over here…

I might try blending this with something else, perhaps a white or a green tea would be good. Or – maybe some seltzer water.

I wonder if Adagio has a tea named Lupicia?

Amy- I wonder if the grapefruit is the culprit of your nausea? I usually avoid it, because for me it can be too acidic.

Ah, one of the delightful teas from my Lupicia Herbal Happy Bag! I was really pleased to get this one as I had been eying it for a bit. Seems I’m becoming addicted to lemongrass, especially as my sinuses have decided to state their displeasure with winter. Stupid cold weather season. Lupicia was also the reason I discovered that not all rooibos are created equal (nasty). Green rooibos is actually my friend. So yay for herbals that include both lemongrass and rooibos!

Previous, I had had a grapefruit flavored teabag from Lupicia and I was a bit disappointed because it wasn’t as obnoxious tasting as the smell and, for once, I wanted an obnoxious flavored tea. Well, this one isn’t obnoxious either, but, coupled with the lemongrass (or perhaps because the base is green rooibos instead of a black tea), the grapefruit seems to really pack more of a punch. It’s very citrus-y. The two flavors pair well to give this not-tea a great whooshy feeling that feels refreshing, makes my sinuses happy but still manages to be mild and smooth.

I couldn’t really pick out the rooibos (which is fine since it is a fairly mild taste anyway) but I think it managed to show up a bit at the end, adding a hint of extra sweetness to the citrus whoosh-iness that kept the tea from having a sharp citrus edge. I could have dealt with the flavors being a bit more intense, but at the same time, if the flavors were stronger this tea might become a one-cup-and-done type tea. As it is, I enjoyed it so much I felt the need for an almost instant resteep.

Which, speaking of resteeping, this one handled it rather handsomely. The first steep had the grapefruit flavor being a tad stronger than the lemongrass. In the second, the lemongrass perked up to stand out a bit more. The grapefruit wasn’t weak and was still noticeable but in this steep the balance was tilted ever so slightly in favor of the lemongrass. In other words – still great whooshy citrus with no unhappy or sharp edges and something I could totally get behind having more of.

Oh dear, a tea named after a rival company. I think I just heard a gauntlet hit something.

This tea is glorious. Probably one of my absolute favourite teas ever. The idea of “Green” Rooibos is totally new to me and this baby is friggin’ delicious. I love Lupicia’s teas in the first place, but man this one is the best of the best. The grapefruit flavouring is very present and tangy – sweet citrusy notes galore. The lemongrass adds a very nice vibe and the fact that it’s herbal too is good for those late nights where you want a cuppa but don’t want to have a bunch of caffeine to keep you up. This tea is life-changingly good. I tore through a small bag in next-to-no-time at all. I’m getting more as soon as possible. This tea is epic.

Yum! So far, my favorite flavored rooibos from Lupicia. I’m working my way through them pretty methodically. This green rooibos smells heavily of citrus in the bag and you can see the little pieces of grapefruit and lemongrass that cause it. It brews up into a light golden amber and when hot, the cardamom pods poke through the light citrus taste. Cold-brewed or just cold, this rooibos really develops into a grapefruit-y tea. It’s not sweet, but it’s not mouth-puckering either. A nice drink to wind down at the end of the day.

The grapefruit flavor/scent is pretty authentic! Sharp, sweet, and sour in just the right way. Really, it might be too authentic since I enjoy grapefruit flavored things, but not grapefruit itself. Fresh, it was a little much for me, but it’s mellowed since I opened it two months ago. I never really reach for this one since I don’t love it, but when I make myself a cold mug of it, it’s all right. I think the cardamom in this blend is a weird choice. Fans of grapefruit would probably like it.

I have a sniffle and it is starting to get cooler here, so I thought a hot cup of something would perhaps help.

I am pretty sure this is the last untasted and unwritten about herbal in my current stash. So yay, there’s that.

There’s a strong citrus aroma from the dry mix. After steeping, it’s an orange Fanta color and to the extent my sniffer can discern anything in its runny state, it smells a little lemony, a little more grapefruity.

The flavor reminds me of why I generally find green rooibos blends superior to red ones. It’s a pretty clean flavor delivery mechanism, without much in the way of its own to distract. To the extent I taste it, it’s a slightly reedy taste and completely inoffensive.

I like this quite a bit. I’d like it more if it was a bit sweeter, but hey, it’s grapefruit.