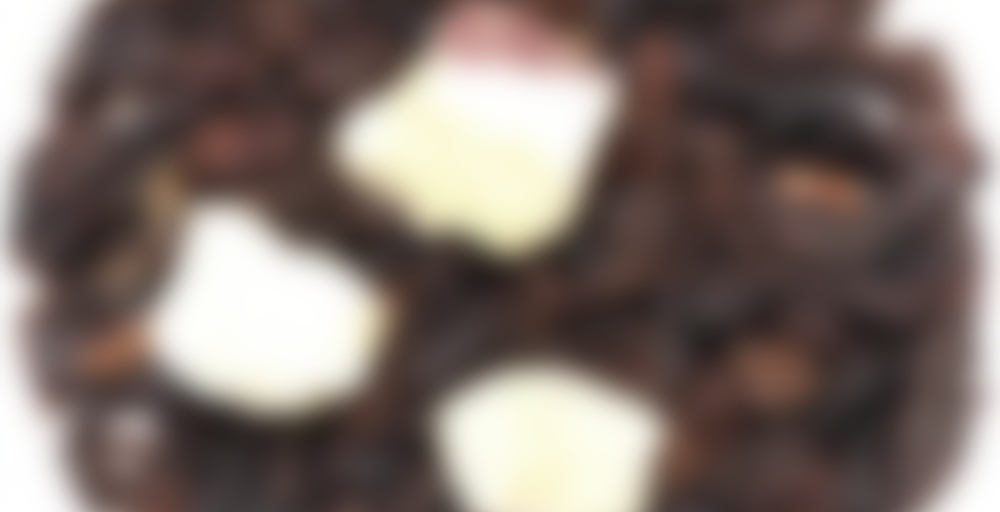 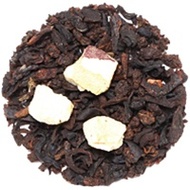 A black tea blend with a generous portion of creamy Japanese sweet potatoes. The buttery sweet aroma will remind you of a cozy holiday gathering.

I was pretty excited to see this as the freebie teabag from Lupicia this month. I love trying random tea flavors like this and I loved Adagio’s version until I met Samovar’s Yunnan Golden Buds which was an awesome buttered sweet potato flavor in an unflavored tea. So yeah, I love sweet potatoes and have no issues with it in tea-form. But anyway, on to this sweet potato tea.

No additives. The taste isn’t as strong as the smell would indicate but the aftertaste is, tasting just like I’ve had a bite of sweet potato casserole. It’s… kinda weird. The taste of the tea is sort of… starchy sweet but not sugary sweet, more like buttery sweet but it isn’t quite buttery. There’s a tea taste there but it’s not all that complex. It’s pretty much sweet potato casserole, especially on the aftertaste.

Which is really kind of neat… for about half of a cup. Then it’s just too much. Even though I liked the taste and it gets full points for flavor accuracy, I was pretty ready to pour out the last few sips of the cup instead of drink them. Tasty or not, I was done with it.

And that leads me to the issue of how to rate it. I think the flavor is done very well. There’s just something about it that I can’t take for all that long. I think I’ll leave this unrated.
1 teabag/6oz

I think I know where you’re coming from on this one. There’s only so much sweet potato casserole one can eat, as it becomes too rich after so many bites. I can see how a tea that is spot on in flavor would have the same quality.

I completely agree w/ your last paragraph. Going to do my tasting note now.

amandajo, I think you pegged it there. I love sweet potato casserole but my portions have to be small or I won’t finish it. I think with this tea, half a cup is a good portion.

FINALLY! Me and Lupicia Sweet Potato Pie get to meet! I am sooooo happy to finally have this in my stash! I will covet it! I wish I could get more I absolutely love this. I was not very pleased with the aroma of the dry leaf but am relieved to find a DELICIOUS cup of Sweet Potato Pie!
Full Review on http://sororiteasisters.com/ on the 5th!

Having never tasted Sweet Potato Pie, I can’t tell you how close to the real thing this tea actually is, but, I can say that this is quite good. I’ve also tried the Sweet Potato Pie from Adagio, and I think that this one is better. I am not getting the same starchy quality that I got from Adagio’s, although there is some drying astringency… it might be a little starchy but not as strong as Adagio’s starchy taste.

It has a very pleasant sweetness, it tastes like sweet potato. Very Thanksgiving-ish!

I agree this is more sweet, adagio’s is more potato. I wish this would be more starchy in mouth feel though… but then again maybe sweet potatoes aren’t and that’s why I don’t like sweet potato fries.

sweet potatoes aren’t as starchy as regular (or “white”) potatoes… and I love sweet potato fries and would choose them over regular fries any day!

Yeah sweet potatoes are a much different texture which is why I love them haha and now I want sweet potato fries!

I was shocked to see that a company other than Adagio would think up something as crazy as this… and even more shocked they beat Frank to it.

I know Lupicia doesn’t use the standard water volumes, but I wanted to compare this as closely as possible to Adagio’s version so I’m going w/ 1 bag for a full 5 min (yikes!) in 8oz of just below boiling water.

Whoa… um… HELLO!… Well this certainly isn’t a weak cuppa. While I’ve only had sweet potato fries (nasty…), It’s my best guess that they pretty much nailed this. I’m greatful for the light creamyness of the marshmellow because I think it would be way too strong and harsh w/o it. There’s a bit of the starchy potatoe texture to the tea, but not as much as Adagio’s. This one is more sweet potatoey while Adagios is moreso just potatoey… and I prefer that one, I can barely finish the cup. There are some things (like beets) that I only like in tea… well, I guess I don’t even like sweet potato tea. You could do this in latTEA form, but I think it would be best neat topped w/ mini marshmellows.

I’ve been curious about this one so I’m glad you tried it :)

Haven’t braved my sample yet, but I was thinking of topping it with marshmallows too!

There is a local ice cream brand that makes a sweet potato pie ice cream. My daughter loves it-I bet she would love this tea…

Or steep this in milk and make your own tea ice cream:)

So, if you like sweet potato fries, would you like this? Because I’ve got to say, I really, really want to try this one!!

I found this teabag in my stash at work. (I’m back in the office for the first time today but I’m not sure I’m going to last the whole day. Still coughing and sore throat-y.)

Steeping at work is always imperfect because the water is kind of take it or leave it, and it comes out of the spigot quite hot. So I try to limit myself to teas that can take really hot water.

I should mention that I’m not a huge sweet potato fan. I really like the fries they do at The Counter, and I will eat a baked sweet potato during the appropriate season, but I’ve never been much for the mashed potato with pineapple thing my BF likes to make for Thanksgiving. I can’t now recall whether I’ve had sweet potato pie. I must have, but I probably thought it was pumpkin.

The little mesh bag had little white dots in it that I assume are the marshmallows, and fine grains of tea managed to escape onto my fingers as I held it to my nose. Wow, what a strange smell to the dry leaf. Definitely potato, but it seemed to me to waffle between sweet potato and white potato. There was also some weird strong scent that I see Auggy has identified as whisky. Yeah, that could be it.

The tea was a really lovely clear reddish brown but the aroma of the steeped tea was bakey bakey bakey and not in a way that appealed to me. The flavor, though, was surprisingly quite good. On the front of the sip, there’s a mild tea flavor, but there’s something sweet and lightly spiced that’s pie-like evident toward the end of the sip and in the aftertaste. The little marshmallows also add sparks of sweetness that pop every now and then in the mouth.

I think this is quite well done. It’s not something I would buy, but mainly because sweet potato flavor is not in my top ten or probably even 20 list. I could see how it would appeal to fans, though.

I agree with the other notes that give this full points for accuracy. The smell and taste are spot on. That said, it’s not something I could drink everyday, nor do I see myself craving it again. But, I’m glad I tried it, as it is a fun tea for the season. I added a bit of brown sugar and some milk, but cream (or maybe even marshmallows?) would have been ideal.

As much as I don’t sweeten teas, yes I want to try brown sugar and marshmellows.

For me this seems to have been the dud of my recent Lupicia purchases although some other people seemed to like it more than I did.

It’s got a sweet potato pie aroma, for sure but I found the flavor to be a bit too strong as well as artificial and it left a bit of a funny aftertaste. It does have kind of a whisky flavor as Auggy mentioned. It also gets pretty sweet. Adding soymilk definitely seemed to help me to finish it off.

Steeped for 4 minutes in boiling water. Might try for less time next go around.

I’d love to try some of this.. even though I just swapped with you! It just sounds so good.. If you’d like to try any more of my tea, let me know. I’d be happy to send you something in return!

Weird…strange…I just can’t put my finger on it. I can taste the Sweet Potato Pie and it is in this cup I am sipping. I think this is one of those situations where being too accurate is it’s downfall. It is very buttery with a deep mellow sweetness. I can almost taste the darkness of brown sugar but not the sweetness from it. I am glad I received this sample and feel like I could drink this again. I think it would be an occasional treat though. Perhaps it can be best described as… “Complicated”

Haha! “I think this is one of those situations where being too accurate is it’s downfall.”… yes! The very reason I base my numerical ratings solely on accuracy.

Please don’t tell me what I mean. Thank you.

I have never had sweet potato pie but I love sweet potatoes so I was excited to try this one. Unfortunately I find it to smell extremely like juicy-juice apple juice which I do not like. It tastes pretty much like that too, but the addition of milk makes it taste like black tea with a hint of sweetness. I am glad this was only a sample cause this was really just not my thing.

Boiling 5 min, 0 sec
Yours I Like This
6 likes
5 comments
Edit

Hm… didn’t get any apple in my cup. Definitely sweet, but not a juicy apple…

Well it wasn’t so much juicy apple as sickly sweet apple, but my sample took an accidentally detour to Chicago and the leaves were kind of crushed and leaking so mine might have just been messed up.

Haha! Oh no! How did it manage that? A friend of mine had a package that literally made it cross country twice (the tracking code proves it) before making it back to WI.

Well someone got me a lupicia order for a gift and then the newsletter went to the billing address instead of the shipping – haha. And oh my how does that happen?

I have no clue! lol!

Tastes surprisingly milky! Smells deliciously like caramel and yams. I’m kind of surprised overall by this—I thought it would have been too “cloying” and artifical but it’s not at all. It’s a wonderful sweet potato flavor and very enjoyable. I love the milkiness!