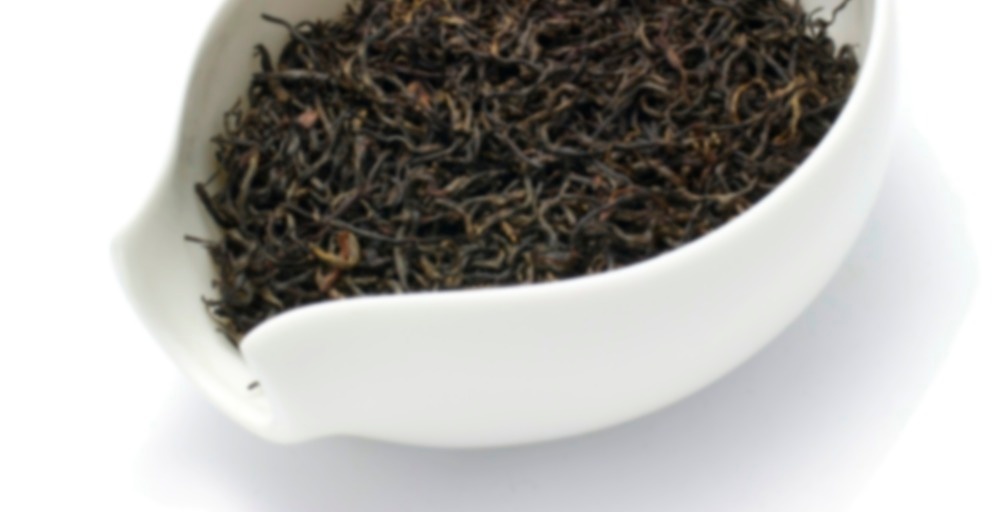 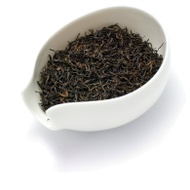 Yixing Hong Cha −also called Yangxian Hong Cha− is a famous black tea. The dry leaves are straight, tender and dark in color. Usually two leaves and a bud or one leaf and one bud are picked.

Thanks again for the samples, Nannuoshan! I’m glad I was able to try most of the black teas! I used 1 1/2 teaspoons for a 12 ounce mug 2/3 full. The leaves look a little the Yi Ji Qi Hong Xiang Luo and the Tanyang Gongfu – completely dusty black and shorter than some of Nannuoshan’s other black teas. The fragrance of the dry leaves is very bready. I would say the flavor is somewhere between a keemun and a bailin gongfu but difficult to describe. There are some deep but subtle plum notes, rye bread notes, hints of chocolate and tobacco. A very dark cup and very tasty. The second steep seems on the lighter side, but that’s probably because I waited the same length of time to steep the second cup.
Steep #1 // 1 1/2 tsp // 10 minutes after boiling // 12 ounce mug 2/3 full // 3 minute steep
Steep #2 // 10 minutes after boiling // 4 min steep
nannuoshan.org

This tea tastes very much like a brighter lighter cousin of a Xiang luo Keemun I have. It has bright winey fruit tones on top, which come off as plum and blackcurrant in early steeps, mixed with the upper tones of malt underneath this is bitter cocoa, Ovaltine, barley like grainy notes, that open up to the light and bright floral notes I find in Keemun which are kind of a cross between a lemony green floral and spicy carnation. There are also nice touches of spice and burnt butter toffee notes especially in the first steep. The tea is very light in body but is given texture by the sharp upper notes and a bit of astringency which emphasise the light bubbly note of the tea. The tea has a moderate tone of caffeine which contribute to the tea making me feel alert and refreshed.

The dry leaves are very thin twisted needles that are dark brown with thin lines of gold and copper. The leaf smells of bright citrus and grainy notes.

I really enjoy the sense of well being this tea leaves me with as well as the bright, sunny nature of this teas flavour profile. I definitely wouldn’t mind revisiting this tea in the future. Thanks very much Nannuoshan for sharing it with me!

i loved this one a lot

Thank you to Gabriele and nannuoshan for this sample!

Of all the teas I requested, the black teas are the ones I’m most looking forward to trying. Black teas are my favorite and I’m sure these will be no exception. I may try one of the two in a teapot, just for something different, but this one I’ll make tonight in the gaiwan.

The leaves are short in length and most have a crook in the end though some are bent nearly in half and look like a hastily-scribbled letter “U”. There are a few pieces of leaf that haven’t been twisted but look more broken and a fine beige powder along the inside of the bag. The color is black but with the slightest tint of dark green.

A quick rinse first according to Gabriele’s instructions and then on to the first infusion. The color of the tea liquid is a beautiful burnt orange with an added luster that makes it shine in the kitchen light. The liquid almost seems thicker than it should be, and the aroma reminds me of cooked turnip greens (though not excessively so). I think I must be unaccustomed to drinking straight teas (either that or I’m doing something wrong here), but this one too seems bitter to me. My husband says it’s not really bitter, just strong, but I’m going to try cutting down the time on the next steep to see if that helps.

I steeped this a total of six times. The third, fourth, and fifth infusions were the best in my opinion; the tea was no longer bitter and started to take on a fruity note. By the sixth infusion, the tea was starting to become weak so I ended it there. Overall, this was an enjoyable tea. I would be interested to try this in a teapot with some cream and honey to see how it tastes that way.

Thanks for the sample, nannuoshan! This is the third black tea I tried. The dry leaf is dark brown to black in color, thin, and twisty. It smells like malt. I followed the recommended gong fu parameters to brew this tea, but I was able to enjoy a couple more infusions than were listed. The brewed liquor is a nice reddish-brown.

I taste a tiny bit of cocoa, but the flavor seems more potato in nature. I also get a bit of a tang. It is smooth and lightly viscous. Overall, it is clear that each of the three black teas I tried are different enough that one might enjoy all three at different times.

Small, wiry, and twisted leaves. About 1cm in length and deep brown in color with reflective golden hairs. The dry aroma is both sweet and salty with cocoa, potato, and longan fruit notes.

The tea liquer is a warm orange color. There’s some really unique (and kind of strange) soy sauce and potato sort of flavors alongside fruity, floral, and chocolate notes, as well as a tamarind/greenish tang. An interesting balance of sweet, savory, and tangy.

The spent leaves are a milk chocolate brown, very small and tender. A good tea with a very interesting flavor profile, though to me it was a bit strange.

This is a black tea, was it stored in Yixing jars? Trying to figure out the reasoning behind the name.

Right, it is from Yixing city. It is not as well-known as other Chinese black tea but has quite a good reputation in China.
Yixing, apart from the famous teapot, is also known for black and white tea (xue ya).

Nice! I thought of the jars because Teachat people have posted several photos lately of “old” clay jars full of tea showing up at auctions and selling for big bucks.

Oh, I am going to regret not having more than a sample of this. Sweet and smooth, this has notes of chocolate and sweet, ripe fruit. With extreme oversteeping (like 15 minutes or so of having to be on the phone with the mother), it gets hints of a bite but not unpleasantly so. Not sure if this is the first Hong Cha I’ve had or not. I am a fan of this at any rate. :)

I started out with just cooled from boiling water in a little glass pot, tasted at about 15 & 45 seconds (after it cooled off a bit) and it had more caramel notes in the first 2 cups than in the subsequent.

I hesitated to give a score that high. But, being the best black tea I have ever tasted, a 98 it seemed to make his case. Leaving two points from the 100 just because it can always improve!
Why I like it so much? First, it smells incredibly sweet and rich. The colour of the infusion is a rich reddish, lighter then I was expecting. The taste is smooth and brisk and the aftertaste lasts for a long time. I had it for breakfast and matched very well with fruits jam and biscuits :-)

We’ve reached the end of the queue!

I suppose that means we’re back to the more sporadic way of posting, then. Okay. I can deal with that, I guess. Maybe. Perhaps I’ll end up sticking to my posting days and build up another queue. We’ll see. It was quite an easy system for me to work with.

Here is another one I got in my recent order from Nannuoshan (which I really must learn to spell. I get confused about the order of o’s and u’s and the amount of n’s involved) and also one that I didn’t feel it was necessary to sample first in order to know I would like it. I’ve had similar to it before, you see.

This is a very chocolate-y tea. Unlike the tan yang which gets cocoa-y but not chocolate-y, this one is completely opposite. Chocolate-y, but not especially cocoa-y. There is a difference between these two. It seems a subtle difference, but once you realise it’s there, you’ll find that chocolate and cocoa are actually very different notes. One is sweet and the other can have more of an astringent touch to it.

Anyway, this one is chocolate-y. More specifically, it reminds me mostly of milk chocolate. In fact, it makes me rather want some. The chocolate note is only right at first, though. It only needs a few minutes of cooling before more notes start developing. The next thing I notice about it is a fruity note in addition to the chocolate. This bring me thoughts round to chocolate raisins.

The next note that emerges, again in only a few minutes of cooling, forms the body of the flavour. Here we have something sort of wooden and pine-y. It’s not really smoky in flavour like pine-y things can often be, but there is a touch to it of just a wee little hint of smoky almost being there.

As it cools even further, the chocolate comes out again. Now that we’ve reached a comfortable sipping temperature, it’s super-chocolate-y and quite sweet.

I would say this was a relatively mild tea. It’s not mild in the way that the flavour is in any shape or form delicate, because there is a lot of flavour in this, but it’s also not really one of those ideal morning pick-me-up teas. (Then again, I also think Keemun is a very strong type of tea while most other people seem to find it a fairly mild type, so what do I know?)