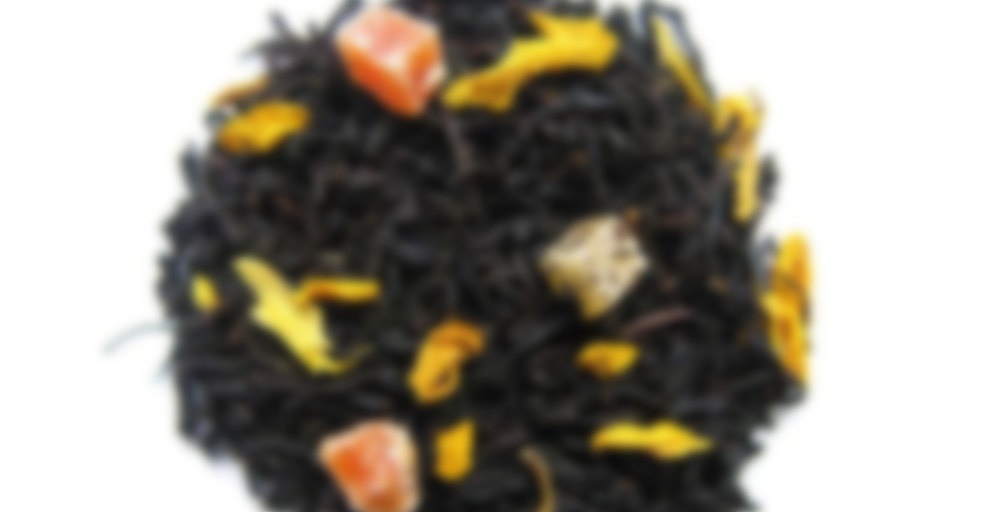 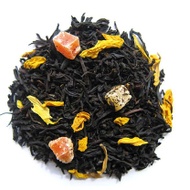 Keemun tea with all the succulence of sunny fruits. You will be seduced by the naturally sweet flavours of melon, peach, and papaya.

Interestingly, steeping this at a higher temperature (200F) made the base come out smoky, and it’s sashaying with the fruit flavors for first taste. I liked it much more when it was all fruit, little smoke, and the rich base. I’ll make a note to steep this at a lower temperature next time, see if I still feel it worthy of the high rating.

Thanks again JustJames for sharing a huge bag of this with me!

Here’s the first tea I’m sampling from my trade with Lala!
I have only tried a few teas from Nina’s. The only one I like so far was Nina’s Japon, so Lala sent me a bunch of them to try. Thanks Lala!

So…I’m not sure how I feel about this one…It has a weird kind of stale taste, along with the flavor of dried papaya. I wonder if Nina’s uses artificial flavorings, because my tastebuds & lips now have a burning sensation, & my tummy is unhappy.

Sometimes I hate being overly sensitive.

normally they are not using at all artificial flavourings Terri.
Having said that I never saw any French tea brand recognizing using any…it would be like screaming s**t into a Church…
I ask myself if a blend of Betjeman & Barton has artificial flavourings, I think it does but they would never agree…

Who knows…all I know is now my stomach aches, & my tastebuds & lips feel puffy. Maybe I’m just allergic to something?

Sorry this one is not agreeing with you. I hope the others teas are fine. I no longer have the package for this one but on some of the other Nina’s I have, the ingredients list uses the terms vanilla flavours, etc. So I am not sure what that means.

No need for you to be sorry, Lala. I’ve had this sort of reaction to teas before. That’s one of the reasons I don’t drink very many flavored teas. I hope you won’t feel slighted if I don’t sample the other ones. Usually if a company uses flavors in one tea, they use them in others. I’ll pass them on to someone who will appreciate them though!

That is fine, if you don’t like it, or can’t drink it, I am more than ok with that. That is all part of a swap. To try things you have never tried, you might like it, you might not. Hope you start feeling better soon. :)

The keemun base is smooth, but that is all I’m tasting sadly. No peach, melon or papaya. There’s a light fruit scent, but I’m not finding that it comes through in taste.

My thanks to Laurent from Nina’s Teas for the sample.

Sounds like my experience. Maybe if we had more than a sample, we could get more fruit chunks in there?

Perhaps that’s the issue, but I have found that all of the samples that I’ve been lucky enough to try have lent more towards being perfumed then flavored. It’s common for the human body to register fragrance as taste when eating, so that could attribute for reviews saying they could barely taste the additions. It could be that the samples may be from the “bottle of the barrel” or perhaps old stock (although I would doubt it) as well. Who knows!

Tried this one a few times today. To me, it tastes better with a bit of brown rock sugar added. It just enhances the fruit flavours in the tea. I definitely can tell the base is a keemun. It is sweet, and smooth, just the tiniest hint of smoke. I do get a taste of papaya and some melon flavour. I am not really getting any peach flavour in the tea, but there is a bit of peach in the aftertaste. The liquor is thick, reminiscent of a juicy slice of papaya.

I do like this tea, however, I think it would be a bit better with a different or lighter base. I think the keemun just overpowers the papaya and melon a bit.

http://steepster.com/discuss/6555-dear-steepster-team-dot-dot-dot-happy-holidays-and-thank-you RIGHT OFF THE BAT I THOUGHT I’D LIST A LINK TO A ‘THANK YOU STEEPSTER TEAM’ THREAD. they work unbelievably hard on our behalf for a place that all of us love— tis the season to say a hearty thank you!

on to the tea! i have mixed feelings about peaches in tea. WHEN i like them, it’s this way…. always realistically as opposed to fake flavouring… i just prefer a more robust fruit presence. i equate nina’s with carefully balanced red fruit teas or clever citrus sneakiness. this blend just isn’t me.

very smooth. makes me think of the smell of very ripe peaches while someone is smoking something distantly with a sweet wood. clever, just not quite me. =0)

I agree – this one had to have lost a lot of flavor somehow. I read Kittenna’s review so I didn’t steep as long as I normally would but when I didn’t get flavor I went ahead and put the basket back in.
I never got the astringency or plastic taste that Kittenna got which is good but I still never got flavor.
Not rating as I fear something is wrong with this tea and would be happy to give it another chance.

Thanks to Laurent at Nina’s Paris for this sample!

I didn’t see any recommended brewing parameters for this tea either, so went with my standard boiling/3 minute infusion… or at least, I planned to, until I sniffed the tea while it was a minute in, and I was already smelling… astringency. Yes, I realize that astringency is a sensation, but I imagine you guys can figure out what I mean… it’s kind of a sharp, pungent aroma that gets my tastebuds going like astringency does (not in a good way). So I took the infuser basket out at 2 minutes instead, because I only have one chance at this tea, and you can always put the basket back in, but you can’t reverse an oversteeped tea!

The aroma is quite nondescript, and smells like a plain black to me. Perhaps a plain flavoured black, as it’s that sort of base that I associate with… cheap flavoured blacks? :/ Although I see that it’s Keemun and not Ceylon, as I probably would have guessed (not that I really would know, though).

Flavourwise, unfortunately, this one isn’t doing it for me. I can tell that it’s a flavoured black (it has a vague plasticky flavour to it), and that’s about it. I’m not even sure that I would be able to say that it’s fruity… the flavouring is quite vague. Luckily there doesn’t actually seem to be quite the astringency that I was worried about (though there is some, and I am drinking this tea cool, which sometimes I find reduces the sensation of astringency).

I’m pretty picky about flavoured blacks, and this one unfortunately wouldn’t be a tea I’d drink again. Perhaps it has lost some flavour during transit or something (I don’t think that my short infusion affected the flavour; usually that only affects strength of flavour), but I can’t say I’m a big fan of this one.

I can totally smell when a tea will be astringent. And thanks for the warning! I have yet to try my sample of this. :)

It seems like all the Nina’s blacks have bold bases that verge on astringent. Not good for an astringency wimp like me, but probably good for others who are sick of baseless teas! I have to say, though, that it certainly wasn’t astringent like cheap blacks I’ve had, more of a bold, brisk sort of astringency.

I had high hopes for this one – papaya, melon, peach and cream flavors?

However, I didn’t pick up those flavors, maybe a teeny bit – but the black tea base was overpoweringly strong. The black tea was going astringent for me as well.

I’m not sure if this one just lost it’s flavor, or it’s more for a black tea drinker who wants a strong black tea with secret fruit in it! Alas, this one wasn’t for me – I want melon flavor!

Full Review on my blog, the oolong owl. I did a review of the 3 samples I received! http://oolongowl.wordpress.com/2013/03/17/ninas-paris-sample-tea-review/

Thanks for the sample, Laurent! Like others, I found this one to lack flavoring. The black base is nice and smooth, but I could only detect a slightly fruity flavor. Maybe more fruit bits per serving? My sample had one piece of what looked like papaya. It was a little too subtle for me.