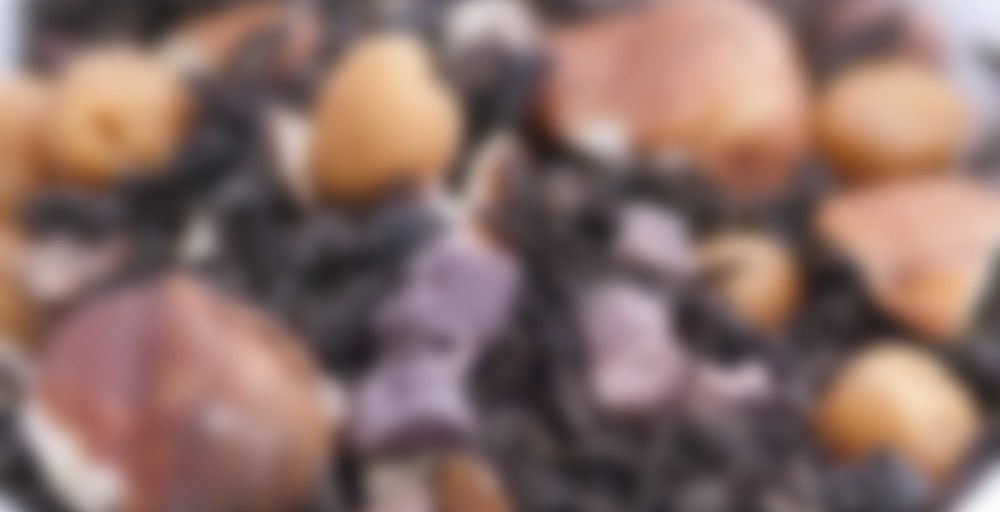 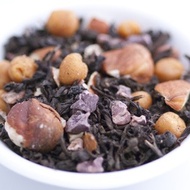 by Ovation Teas
80
You

YUM! I’m really liking this. The black tea base is very solid; a good strong black tea. There is a hint of bitterness that I taste but it is not a lot of bitterness and I don’t find it off-putting. Somehow it works well with the chocolate notes, accenting the bitter-sweet taste of the cacao nibs. The hazelnut flavor develops as I sip, starting out rather weak, but, now that I’m to the mid-cup point, I find the hazelnut flavor emerging and it’s delightful. The caramel tones are probably the strongest of the three flavorings.

Overall, a very tasty cup of tea. I think the next time I brew this, though, I shall shorten the brew time just a bit (2 minutes instead of 2 1/2 in my breville) to see if that helps eliminate any of the bitterness. Until then, I’ll not rate this.

Not tasting or making you think of Praline Ice-cream. Silly me.

Thanks yssah for buying these teas for so many of us Steepsters! This blend sounded divine. Caramel, cocoa, hazelnuts! This blend really has a very unique flavor. Just the black tea alone I’m thinking has a very strong flavor. I’m not sure if it’s because it was just blended or if the hazelnut flavor is making the black tea itself seem stronger. It had a very deep, dark flavor! I saw a couple pieces of caramel hidden in my infuser, covered in black tea. They added a sweetness along with the cocoa nibs giving it another element to its deep flavor. I may have sipped this too late though. I don’t usually have black teas late anymore, but I couldn’t stop yawning. It kind of made me a bit dancey (and I am never dancey) or it could have been the No Doubt show I was watching on TV. Gwen can make anyone dancey! But it was probably a combination of both. I really like this blend and it’s another one I’m happy I was able to try! I’m looking forward to many more cups of this, and apparently the flavor will get better as it settles. I’m hoping I won’t miss Ovation too much after they went out of business and I try many more of their blends.

I’m in a bit of a tea funk today. I just can’t decide what I want to drink, nothing seems to be hitting me. However, I was determined to find something—if I get out of the habit of drinking tea every day I find it kind of hard to get back on the horse. So I decided to just go for it and put on water without deciding on a tea. My teapot doesn’t whistle when the water is ready so I have to time it, not the best idea looking back because I ended up with only a few seconds left, frantically digging through my sample bin in search of something. I have well over 100 different teas in there to try but I seriously couldn’t pick out any one that screamed “try me” so I went with a flavor combo I knew I’d love—caramel, chocolate, and hazelnut. This is from my box from LiberTEAS and I’ve actually been meaning to try it for about a week so it seemed like the perfect fit.

This smells a lot like Florence, with a hint of caramel. The dominant flavor for me seems to be chocolate, with the caramel and hazelnut about even. There’s a bit of bitterness as others have noted, but it’s not overpowering and I can definitely handle it. Definitely an enjoyable cup, but I do wish there was less chocolate—Caramel Praline in my mind is just caramel and nuts, and as it is this blend is just a bit too similar to Florence for me. Still glad I had a chance to try it out and it got me back in a “tea mood!”

I know what you mean about getting out of the habit! Sometimes you just have to go for it and put the kettle on to get motivated haha

OK, I have to be honest, I’m not happy about your “less chocolate” comment. That was vile and uncalled for, and just plain… blasphemous. Or something like that. :)

I know right, it’s practically sinful to want LESS chocolate! However, I’m a caramelholic like people are chocoholics, so there’s never enough caramel for me.

I do love caramel too. Don’t get me wrong. And I guess I can kind of understand where you’re coming from with wanting more of a caramel-y taste in this blend. But to say less chocolate just seems… wrong somehow. Just … wrong.

G’morning! My blind tea grab today got me this sample, courtesy of The LiberTEAS Sample Box that I purchased a little while ago.

The dry leaf’s aroma is sort of a generic “sweet,” maybe a hint of caramel. I didn’t get any nuttiness or chocolate. Brewed, the chocolate made its appearance in the fragrance, but I still didn’t really get any nuttiness.

Chocolate is the strongest flavour I got from my unsweetened cup, followed by a bit of caramel complaining about how I couldn’t expect it to play its role well if I wouldn’t give it any sugar (it had a point). The nuts apparently called in sick, or quit or something. After sweetening my tea, I finally got the caramel I really wanted, but honestly, I think that’s more because I used dulce de leche as my sweetener than that the tea did its job.

In the end, I just had to work too hard for this, and even then it was only mediocre. After being blown away recently by some Della Terra Teas blends, I’m just not willing to put in so much effort to get a cup with lackluster flavour.

I wish the nuts I’m forced to deal with today would call in sick, or quit or something. :) Also, you reviews always make me smile. Thank you for that!

Veronica – me too! The nuts here in my office are certainly alive and well…LOVE Your reviews Nik

I’m sorry you didn’t enjoy this one very much. :(

Veronica and Ellyn: lol and thanks so much! LiberTEAS: Hey, no worries, are you kidding? This is awesome! I was having a look through the other tasting notes and I thought I saw someone saying that Ovation don’t offer samples, so you have to get a bunch of tea at once? This tea’s name and description are so great, that I would’ve done just that, and I would’ve regretted it. Your sample boxes are the best thing ever and, wallet permitting, you can bet I’m going to pounce as soon as you’ve got more of ’em. I can always add this to a swap list and pass it along to someone else. =)

Ovation teas really has an insane amount of flavor combinations, and it makes it so hard to choose, especially since you can’t order samples. It’s probably because they apparently blend each tea to order, so they don’t make small amounts, but it would be nice if they had some of their standard teas available for samples. But plenty of other companies don’t offer samples either. I had a groupon-style deal for this company and had an impossible time trying to decide what teas to get from their blends, and whether I should go for the custom blend, but ultimately I decided to try a custom blend another time. Blending to order probably means I should wait for the flavors to meld a bit more before trying them, but it’s been about a week since they’ve been blended so I’m going to give them a first try now.

The smell of the dry leaf on this one is great. I get a lot of chocolate, caramel, and nuttiness. Definite yum. It brewed up fairly light in color, and I’m afraid I might have made it a bit weak… I don’t make tea in my small teapot at home all that frequently, and I think I might have overfilled it. Anyway, the aroma of the steeped tea has much less chocolate but more caramel nuttiness, along with a bit of roastiness that almost reminds me of a dark oolong.

The flavor is a little weak, certainly my fault, but what’s there is nice. It’s nutty, chocolatey, and caramelly, with a pretty pleasant black tea backing it up. The nuts are actually hazelnuts (and there are big halves of them in the blend), so it ends up tasting kind of like a caramelly Florence. A good combo! It does seem like there is a hint of bitterness, which is probably coming from the Assam in the base (I’m pretty sure all their black bases are an Assam/Ceylon blend), which isn’t my favorite, but I have been able to make it work in their teas before. I am interested to try this one in another couple of weeks under more normal circumstances and after the flavors have “matured” some more.

Got another sample of this, this time from Tea Sipper although I have no idea when but I’m sure it was months ago. This time this tea was not that great. I don’t know what I did to it, but it is quite bitter, even with the addition of milk and sugar.

Thanks Lariel! I was letting this cool while I was doing yoga and the aroma made my mouth water! It’s very sweet smelling. The flavor is sweet. The black tea base is very bold and very present. The caramel and praline flavors are more in the background and aftertaste. There is a bit of a dark chocolate\coco flavor that is almost as strong as the black tea base. I’m glad I got the chance to try it! Thanks again!

Since I started a new Stargate SG-1 DVD, I needed some tea. I like having tea with my shows.

This tea smells like tootsie rolls (more so dry). Not sure why. The flavour is sorta generally sweet, with a little caramel. Nothing in it makes me think of praline. I might have to try with vanilla or vanilla next.

Er, I mean almond. It would be good with almond.