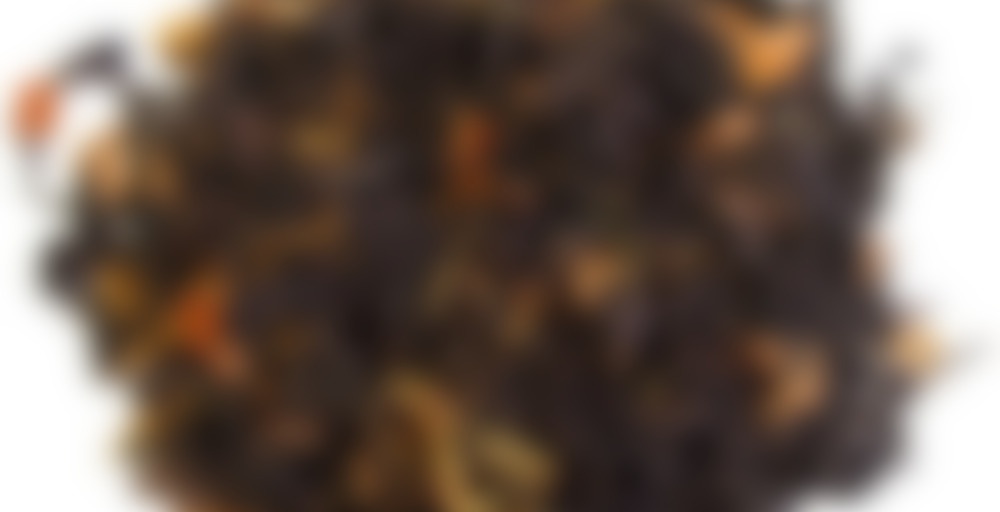 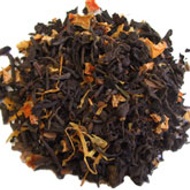 (Note: The tea is labelled as semi-green, but is in the puerh section on their website.)

This tea has sure taken me on a ride. First of all, the dry leaf smells intoxicating. Swirls of fresh orange zest with a squeeze of grapefruit, topped with a pinch of cinnamon. It’s exactly what I’m looking for in an orange spice tea.

The cinnamon comes out more once steeped. But the real confusion happens with the flavour.

First couple sips, alright, it’s citrusy, a little spicy. I was actually expecting more cinnamon but that is not a complaint.

But as this started to cool off, there was something in here that reminded me of something else. What is it? Is it a vegetable? I think it’s a potato or something. No, no it’s not. It’s something I get at a Japanese restaurant. Huh. Halfway through the second cup, I was getting warmer. It’s something with tempura batter on it. Eureka! It’s broccoli tempura. That semi-green base must be playing mind games with me.

I will see when I drink this next time if this bento box lunch special will be jumping out of my cup again.

I know they call it a semi-green, but I remember being told that it’s a puerh, they just classify it weird in-store. Oh yeah (reading webpage). It’s a puerh on their website, semi-green in the ingredients. But it’s a weird puerh, isn’t it?

Yeah, it’s super strange and totally caught me off guard. Did you pick anything up from Silk Road this past weekend?

Puerh, citrus peels, cinnamon. Steep it grandpa style, never ending in a cup. Even though the peels tend to float a little. Just blow them aside and take a sip. :)

Tea leaves in cup, refill all day as you get down to about half full.

Ah, I see…never heard that before.

So I woke up with a headache today, and it was foggy out, and the construction across the street was loud (it always is, but on my days off, I have to deal with it more). As a result, I figured now was the time to try it. It smelled warm and heavy and just the thing I needed.

Brewed, I was reminded why I love pu erh. So dark and rich and full…that’s what pu erh is a common winter tea for me. It’s got body.

The taste isn’t my favourite..probably because of the orange peel (it’s one of those I like it in some combinations but not all combinations). The cinnamon was mild enough and not super hot. I’ll tell you what this tea made me think of…a pu erh based chai. Like Saigon Chai with pu erh base. That’s something I can get behind. I should get more Saigon Chai. Been too long without it.

Anyway, I do like this blend, but it isn’t a favourite. I’d pick Chocolate Orange (Oh Christmas Treat) over this any day. Many thanks to Shayne Bear for the sample. I’m sure I will drink the rest of this.

A puerh chai would be amazing, actually. And there’s a tea shop in North Vancouver that apparently does custom blends. I wonder if they’ve ever done anything like that!

Zen tea has a Pu-erh chai, it isn’t exactly traditional as it has cocoa and coconut, but it may be worth trying if you’re interested.
http://steepster.com/teas/zen-tea/30495-energizing-chai-organic
http://zentealife.com/tea/type/chai-puerh/chai-enegizing.html

This is one of very few flavoured pu’erhs that I can throw a scoop of into the bottom of my travel mug, top with water, and let it go all day, topping up the water as it gets low.

I was really excited that it contains grapefruit, I LOVE grapefruit, but have few teas with it in them. It gives the tea a different citrus kick than the usual orange or lemon, and the extra tang really cuts through the earthy pu’erh to make the cup feel fresh. The cinnamon is subtle in the steeped cup, and intensifies with time.

I usually throw it in the bottom of my Timolino, fill with water, and then it takes about an hour with the top off to be able to drink it. So I’m going to write the following bit as if each steep is about an hour:

First: the grapefruit really shines in the first steep. It’s sweet but tangy, lightly spiced, with a really rich finish. It reminds me a bit of breakfast. Half a grapefruit with a cinnamon bun and cup of ceylon. I feel like the pu’erh is lighter than most in my collection, and tastes like a slightly earthy, slightly malty Ceylon, and I think that’s why I love it extra much.

Second: the grapefruit is still there, but milder, the pu’erh is a bit bolder, more earthy, more malty, more like my other pu’erh. The cinnamon really comes out in the second cup. Reminds me of Christmastime, and those oranges with the cloves poked into them. Really comforting cup!

Third and beyond: more of a cinnamon pu’erh, the citrus is almost gone by the third, and totally gone by the fourth. The pu’erh has softened again, and is back to feeling like a mild black. I like to add a splash of oat milk at this point, and it looks like chocolate milk in my cup! haha! I usually squeeze about 5 cups out if I start with the leaf in the bottom of my cup first thing in the morning.

If anyone is interested in a sample, I have LOTS (probably 250g right now) and since I work up the block from the shop, I can always go get more with very little effort, so I’m happy to send a couple cups’ worth :)

Still haven’t purchased any Silk Road tea yet despite living so close. This sounds good!

This is one of my favourite teas, and since I no longer live in Victoria I’m actually considering placing an order. Even though shipping is more than the actual tea. Wow.

Oh, man— How this tea takes me was back! Golden Phoenix was one of my first notes on Steepster. I initially thought it was a “green oolong” tea (labelled semi-green), and I had one hell of a time trying to politely convey how strange and off-putting I found it.

Then a couple years back I stumbled upon it again when Bear with Me pointed it out as a favourite “puerh” tea in store. That was a big “Oh” moment.

Now I can drink this with a (somewhat) greater point of reference and can actually say that it’s a pretty decent puerh blend. The citrus cinnamon is still a flavour rollercoaster but the “strange” earthy sweetness that confused younger me is now appreciated.

I could see myself craving this more around the fall/winter transition. It’s warm and soothing with a great contrast between action (cinnamon, citrus zest) and rest (fermented puerh, earth). Now the tea name makes sense!

OK so I didn’t get citrus from this at all. A bit of spice which I presume was the cinnamon and the rest was all puerh. A bright one, I’ll give it that. and I’ll accept that the brightness is possibly a result of the grapefruit, but I would never have picked that out, let alone something fruity. I also get something else underneath. Bread? that isn’t quite it. Hmmm.
I did really enjoy this blend. Maybe one day I’ll buy some :D

Wow these ttb pickings are hitting it outta the park!