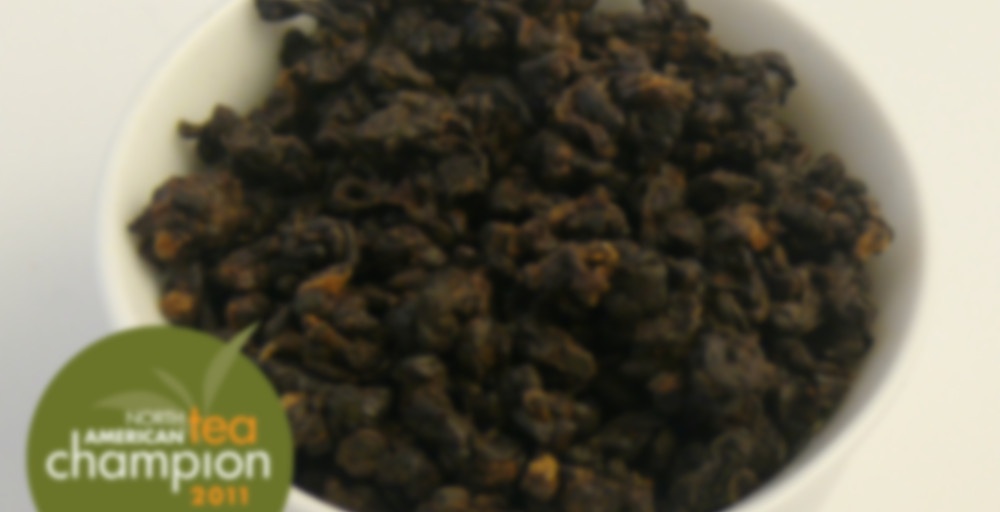 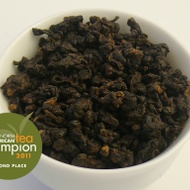 by The Mountain Tea co
82
You

From The Mountain Tea co

A 2011 North American Tea Championship winner, this rare, brandy oolong (what is brandy oolong?) is a must have in your tea chest.

You will be enraptured with notes of cinnamon, nutmeg, malt sugar, honey, and orange peel. We only picked the tenderest leaves of our prized oolong plants to create this exceptional tea; in doing so, we created a tea that is dark amber in color and sweet in flavor, sans astringency or bitterness.

Getting a little more sugar sweetness and scent from a short second steep, but we’ll probably have to start from scratch to test time and temp differences. I’m not a frequent multiple steeper, but to my bumbling taste buds, once green or oolong tea has “set,” the second steep doesn’t seem to change it a great deal.

The liquor smells predominantly of black tea and something I can’t quite place (it’s a really prominent smell, however, and I’ll edit this once I figure out what it is). Almost chocolate or coffee…but not quite. As it cools, it smells much more like a rich black tea. The liquor is a reddish amber, almost greenish on the edges. The flavor struck me as rather two-dimensional. It’s not a really simple flavor, but it definitely doesn’t seem particularly nuanced to me with this steeping. It tastes almost the same as sit smells, with more of a nearly-pine flavor, but in a not-quite-smoky way. I’ve seen it described as creamy or other such adjectives, and while I get that, it seems more sweet, but in a way that you might imagine old wood to be. At first, I cared for neither the odor of the dry leaves, nor for that of the liquor. I felt it tasted really…not off, but not really in a direction that I like my tea to go. As I sip it, however, it starts to seem much more drinkable. I think I’ll definitely enjoy what I have, but would choose something else in the future. Certainly an interesting tea, though.

+1
My feelings exactly, I unfortunately think this will be my last mt tea order as I was let down with just about every tea I tried from the order what else did you get with your order?

Wow, nutmeg! Dark brew, all three steeps. A natural sweetness. This does remind me of something you’d drink out of a snifter at the end of a nice dinner party.

When it comes to oolongs, so far I prefer the green ones to the dark ones. But I like the quirkiness of this one. Will have to play more with the steeping times and temperatures.

This is a very dark, highly-oxidized oolong, very close to a black. There are notes of molasses, and a sweetness that is present through all infusions. Although not roasted, there is a certain “roastedness” to it.

Brandy oolong is oxidized at around 90%, and the leaves are picked in summer. As a result, the flavor is deeper and more pronounced. This particular tea received recognition at the North American Tea Championship.

The hard, dry leaves were individually rolled irregularly into small green “pearls,” and are uniformly dark green in color. The unsteeped aroma is a predictably vegetal. The tea itself is not unlike a smoky Yunnan black, with a small amount of sweetness on the finish. Very flavorful – ideal as a breakfast waker-upper.

Notes of cherry, wood, peach, and red current. molasses. Slight sweetness like dried fruit (figs, dried currents). The fruity + woody notes are really nice, and combines with the slight sweetness well. This is a fairly stemy tea, and highly oxidized. Going in, I wasn’t sure if this was black or oolong. It tastes like a black tea, but the rolled leaf attached to the stems are characteristically oolong.

Thought this tea deserved a second review, as my last one was not so favorable. I enjoy this one grandpa style much more than gongfu. Maybe I should try more highly oxidized teas this way. I get some malty, floral, and a bit of a chocolatey note as well.

I’ve never gotten the same thing with that tea.

I have a friend who knows what he likes. Most of the tea I give him, he kind of screws up his face and nods carefully and is like, “Yeah, that’s alright.” But if you give him an assam, or some Yunnan black, every time, he sighs and sits back and says, “Yeah, that’s really nice.”

I’ve never had anything in the rolled oolong space that’s this close to the yunnan black thing: that particular malty-sweet-subtle sour thing. On the first taste, you might mistake it for an extra-roasty, extra-hearty yunnan black. But then this other, dongding weirdness comes through underneath – some weird fat spinachy-stemmy fuzzy sour-junk. It’s weird. Is this a traditional tea type? Some part of me suspects that this has been pushed to meet a certain taste in the Western market for big, malty, roasty teas, and it sits weirdly with that spinach bottom. But I’m probably wrong. I’m sure it’s utterly traditional or something.

But it’s strange. The parts don’t quite fit together, but still, it’s pleasant, and kind of amusing.

“Don’t ask” makes me want to ask. I’d going to go ahead and ask about the pork liver paté. Because often digressions are the best. Do you have something else to add here?

Wife. Pregnant. Demands for liver. A journey which ends up with 2 pounds of pork liver and fresh pork liver pate. For dinner. And then for breakfast. And tea. My pee smells like pork liver. And this tea really likes the dank salty pork liver.

Wow. That’s a super-specific craving. After I had my wisdom teeth out, I wanted a buffalo chicken sandwich so much that I was willing to put it in a blender and drink it through a straw, so I guess I can’t really judge.

*Disclaimer: I didn’t actually do this. But I gave it a good long think.

I like this one a lot, and makes me feel relieved in terms of budget. I was actually recommended this one as a bagged, and based on the descriptions of caramel, I had to try it.

First time, I tried to do it Gongfu, but wound up Western on accident. I definitely got something like a spicier yet lighter black tea, but the more subtle notes like caramel were overwhelmed after two minutes. There were even seaweed notes that were kinda good, but something I have to be in the mood for. It got sweeter in the later steeps with something that reminded me of a cooked cherry, but not entirely.

Finally got to do it Gongfu tonight, with a ten second rinse at 195 degrees, using six grams in six ounces. The first rinse had a taste that replicates rose water. This tea is VERY close to a Laoshan black because it has the same type of rosy, cooked fruit character. Laoshan’s are one of my favorites, and in comparison, this one is a lighter brother or cousin that does not have the robust malt or chocolate of a black. It also doesn’t have the same dehydrating effect that a black does.

Steep two, 30 seconds, and still very rosy with a faded molasses bitter sweetness. Steep three, a full minute, and darker, redder, and something closer to a black tea. Four at two minutes, and something like a cherry black, but lighter. Five at three, and cooked cherry.

I really liked this one, but it is a toss up. When I’m in the mood for it, I would probably rate this one a 90; when I’m not, an 80. I still need to figure out better steeping parameters for this one. It was sweet, but not as sweet as I was expecting. I didn’t get the full caramel or honey like described, so I’ll be back on this one pretty soon.

This is an extremely dark, smooth, oolong that’s rather unlike what I think of when I think of an oolong; the malty notes are reminiscent of a good Assam accompanied by a thick honey taste that’s oh-so-delicious. This is a perfect after-dinner treat (try it with red bean cakes, it’s great).