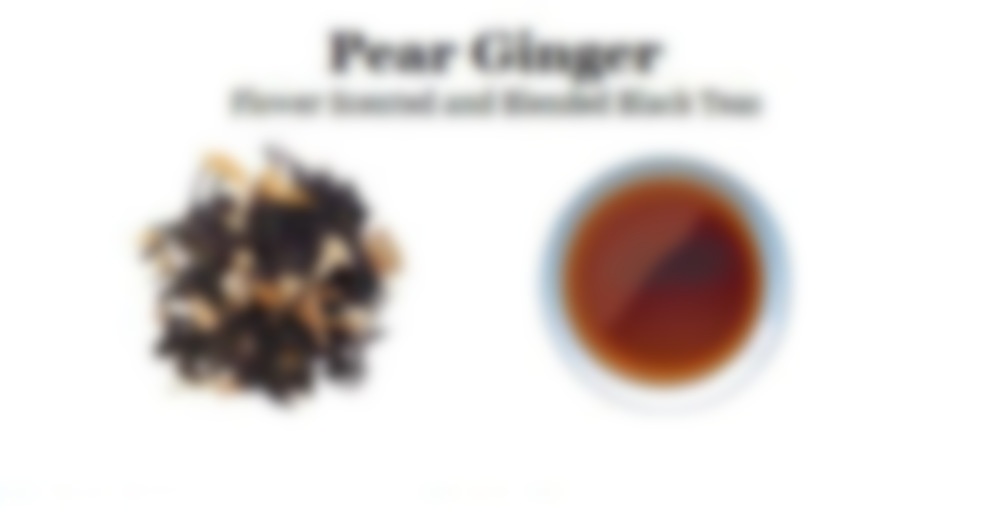 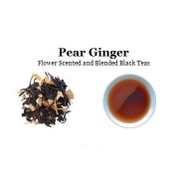 Introduction: An unusual and delicious combination of a full-bodied, smooth black tea with refreshing pear essence, dried ginger and marigold petals. The sweetness of the pear plays off the slight tartness of the ginger. Pairs well with slightly spicy foods.

There must, I thought, while I stood here at my desk sniffing this package of tea, be something wrong with the inside of my head.

Flavored teas aren’t really my metier. I’ve been curious about them lately, though, and had enough success with the stuff I got from 52teas that I’ve been somewhat emboldened to branch out, after having been thoroughly chased away from them by Teavana.

Still…pear? All of the pear teas that I’ve tried have been abominable failures. One of them is probably what I would consider my arch enemy, in terms of tea, because I want to like it…I should like it…it initially promises me that I will like it…and then I spend the next quarter of an hour rinsing my mouth and wondering why I can’t learn that it’s horrible.

It’s actually pretty good. I think the leaves are CTC leaf…they don’t have the appearance of pellets, per se, but they are very small and shredded in appearance. The pale yellow petals in the blend are quite pretty.

I think this blend works for me because it’s subtle. The pear flavor is there, but it doesn’t taste like stewed fruit. The ginger is there, but it’s even more subtle than the pear; it’s mostly notable in a gentle warmth that haunts your tongue after you swallow, with the sweetness of the pear just peeking about its edges.

I’m not sure whether or not I would rebuy this. I think it would make a fantastic iced tea, actually…

The good news is that Tao of Tea has a sort of frequent-buyer program. Every dollar spent with them earns you a ‘tea leaf’, and these can be used to buy…more tea. Or teaware. Or anything on their site. It’s pretty nice.

It’s also nice that you can buy their tea by the ounce…I bought a whole slew of 1oz bags of tea. It seems pretty inexpensive, as well.

The only pear-flavored tea that hasn’t been truly awful was Art of Tea’s Caramelized Pear. It was delicious!

I like this tea. I liked it the first time I tried it, and I like every cup I drink of it. I’ve only had it black, and I can’t imagine ever adding sugar or milk/cream to it. The ginger is light and lovely. I don’t get pear out of this at all. But it’s a nice tea. I drink it a couple times a month. It’s usually not my go-to (as I prefer tisanes) but it’s nice every now and then when I need a caffeine boost.

Bought Tea of the month club for a friend (and BONUS, I get to sample new teas). I am not a fruity tea person but this was nice. Subtle. Not too “peary” not too much ginger. Took a few sips to get the taste of it but it was quite nice and summery. Would maje a great iced tea I think. I will have to talk her in to that for my next visit. Aside~ the tea of the month clug through Tao of tea is a great deal. They send you three nice sized portions of tea monthly in very cool little tins that I am sure will be reused and info on the teas that they send. Helpful emails of when they were shipped and Tea leaf points for free stuf fin the future. I have ordered from them a couple of times since then due to the fact that their presentation is very nice. Great for gifts!