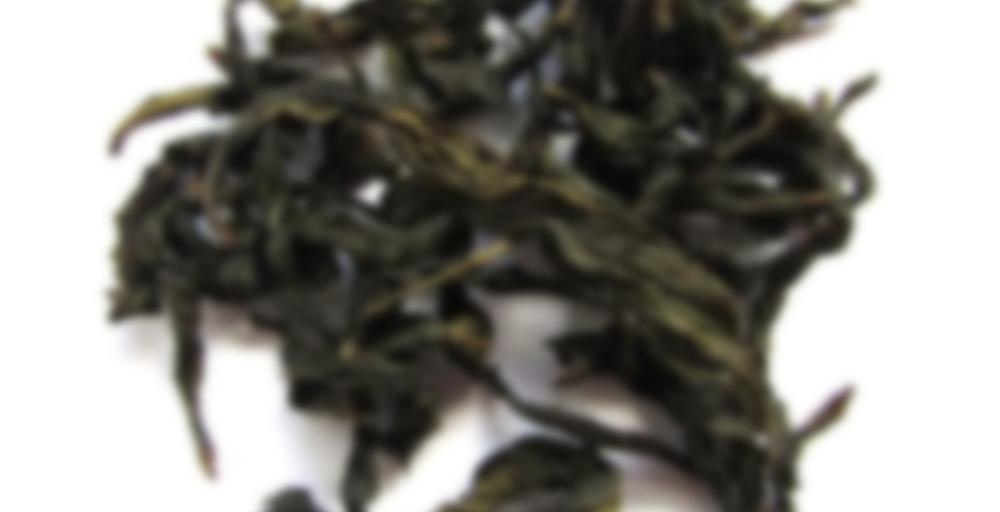 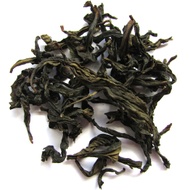 A smooth tea with floral notes which shift into a gentle nuttiness as a result of the tea’s nice even roast.

Thanks so much for sending a sample, Kawaii433! I LOVE Baozhong and never have nearly enough around, as it seems they are hard to find… most tea shops don’t seem to have them. They are probably my favorite oolong. I used 1 1/2 teaspoons of leaves and not-quite-full mugs of water to get the suggested ratio (and so I could have another steep session later.) I was worried the ‘roast’ might disguise the amazing flavor of a Baozhong. Baozhong is lovely by itself. The scent of the steeped leaves seemed too roasty to me, but I shouldn’t have been worried. The flavor is divine from these huge, twisty, emerald leaves: smooth, silky, sweet, pineapple (pineapple like every lovely Baozhong should be!) with only a faint hint of anything roasted. The first steep was somehow the most complex. I shouldn’t have steeped the third steep at boiling, but it wasn’t ruined by any means — no astringency. But the flavor was less unique. The first steep couldn’t have been better. It was like sipping from a magic high mountain stream – full of minerals and goodness. This is a fantastic tea, roasted or not. Definitely one of my favorites from What-cha, though that isn’t difficult since I’ve hardly tried What-cha and any Baozhong would probably be a favorite.
Steep #1 // 1 1/2 loose teaspoons for a not-quite-full mug // 13 minutes after boiling // 1 1/2 minute steep
Steep #2 // 10 minutes after boiling // 1 1/2 minute steep
Steep #3 // just boiled // 2 min

You’re very welcome. I’m going to have to try it with your technique next time :D

I think baozhong/pouchong is also my favourite oolong! So good. I had a couple from Taiwan Tea Crafts and they were amazing.

Oh good to know… I just visited the Taiwan Tea Crafts site for the first time… I will restrain myself. :D

@Kittenna same here…I love baozhong! I’m all out at the moment and am impatiently waiting for TTC to roll out the new harvest so i can order some.

Well, this is is something you don’t see every day: a roasted Wenshan baozhong offered by a Western vendor. When I saw this tea on What-Cha’s website, I just had to buy it. Roasted baozhong has gotten hard to find in recent years as preferences have shifted toward the now ubiquitous jade baozhong. As a matter of fact, I had only ever gotten to try one other roasted baozhong prior to trying this one. I was excited to try this tea, not only because roasted baozhong seems to now be so rare, but also because several people whose individual tastes I trust indicated that they greatly enjoyed it. Unfortunately, I ended up not being as impressed by it. It did not strike me as being a bad tea, but it also had a few little quirks that rubbed me the wrong way and that I could not ignore for any length of time.

In the end, I’m still not sure about this one. It has been about a week since I finished what I had of it, and I am still not sure I can assign it a numerical score with any confidence. Unlike the other reviewers, I seemed to get considerably greener, more vegetal notes out of this tea, and the way many of them lingered in my mouth and on the back of my throat after each swallow came to annoy me pretty quickly. That’s unfortunate too because the roast seemed to have been very artfully applied to this tea; it produced some absolutely lovely, balanced aromas and flavors. The floral and fruity impressions were also very nice. I picked up both daylily and daylily shoot impressions in this tea, which was odd considering that I generally find those notes in teas produced from the Jin Xuan cultivar, and this, like presumably every other traditional Wenshan baozhong currently on the planet, was produced from the Qing Xin cultivar. In the end, I suppose I should just state that this tea was a mixed bag for me. There were things about it I enjoyed and found interesting, but there were also things about it that irked me. In the end, I think there was more good than bad in this tea, so a score of 76 feels about right for now.

For what it’s worth, it seems like the 3 of us that had reviewed it prior to yourself had done longer gongfu infusions. Maybe the vegetal qualities and quirkiness that you experienced were smoothed over with longer steeping times.

I enjoyed this tea so much it prompted me to purchase several roasted Baozhong samples from other vendors since What-Cha’s was out of stock. If you want to try another one, I’d be happy to split my samples with you. I have a light roast, dark roast and one from the 1990s, none of which I have opened yet.

I tried this one Western style as well, but I kept getting those annoying vegetal notes. Generally, I don’t mind them and even like seeing them in some lighter roasted oolongs (Ruan Zhi, Jin Xuan, and Tieguanyin especially), but for some reason, they just struck me as being really pronounced and annoying no matter how I brewed them.

Strange I didn’t pick up on any of that though I wasn’t fully focused on the tea and had only the small sample. Within my setting, I found the tea to be very well balanced. Maybe you’d like a heavier roast? I’m also curious if you recall or have a note on Steepster for the only other roasted Baozhong you tried.

For me, that’s probably what the issue was. Unlike a lot of people, I tend to like heavier roasts for a lot of oolongs. I do have a note on the other roasted baozhong. I bought it from Tealyra a couple years ago. I think it is just listed as Wen Shan Bao Zhong Baked.

I have never heard of a roasted wenshan baozhong! I have only had green.

At some point in the past year in my reading about Baozhong oolong tea, I think I remember reading that roasting the leaf was a traditional part of the process. Recently, a trend for greener oolong emerged and dominated the market, perhaps a reason why I haven’t come across this style of tea before. Thanks to Kawaii433, I was able to try a roasted Baozhong for the first time.

I drank this while grinding away on homework a few nights ago and managed to jot a few barely legible notes in the margin of my graph paper.

Liquor pale straw color. Thick, soft and round with high note gardenia bouquet in nose and mouth on top of a lightly sweet base of toasted corn meal, chestnut, straw, light mineral. Tart bamboo shoot in back of mouth after swallow. Persistant, sweet and airy gardenia aftertaste. Butter later. Never once bitter and only slightly astringent late despite using boiling water.

This was actually a great, calming tea that complemented night work with its cool, soft florals and warm, comforting grain/nut taste. The floral finish stuck around so long that I had naturally spaced out the infusions which let me focus on my work instead of solely on the tea. Really impressed!

Filtered Santa Monica tap water just off the boil throughout. Poured from a pear-shaped purple clay tea-pot into a glass cha hai, and served in a porcelain (“peony”) cup.

Very pale canary yellow liquor. Floral/grassy aromatics with a hint of warm roast nuts. Sweet palate entry with vanilla, chestnut, grain (cornmeal?), opening out into a complex floral finish with hints of fresh hay and maybe even a whisper of kelp; yields significantly more flavor than the aroma hints at. Soft rounded mouth-feel, medium-finish, no astringency.

The flavor shifts around after the first infusion, with a faint sourness, almost like that of sumac or wood sorrel emerging at times. The distinctive floral aftertaste persists for a long time, though this fades in later infusions.

Maintains its distinctive varietal character, while the (not quite) medium roast gives a bit more interest/complexity – pleased that this option is available.

I should have bought
some of that.

In that case, I’m sorry I didn’t pick up a bit more so as to have some left to share with you.

I got this because they are sold out of the non-roasted version. It’s a spring harvest 2017, medium roast and medium oxidization 35-40%. The dry leaves were long dark twisted strips with a yummy aroma of roast, floral and nuts. The liquor is light amber. The texture is comforting, smooth and thick. The first couple of infusions were floral, perfumey, light sweetness. Around the 4th steep, I got some roasted nuts notes but it’s still very floral. It’s a perfumed, highly aromatic, toasty cup of tea.