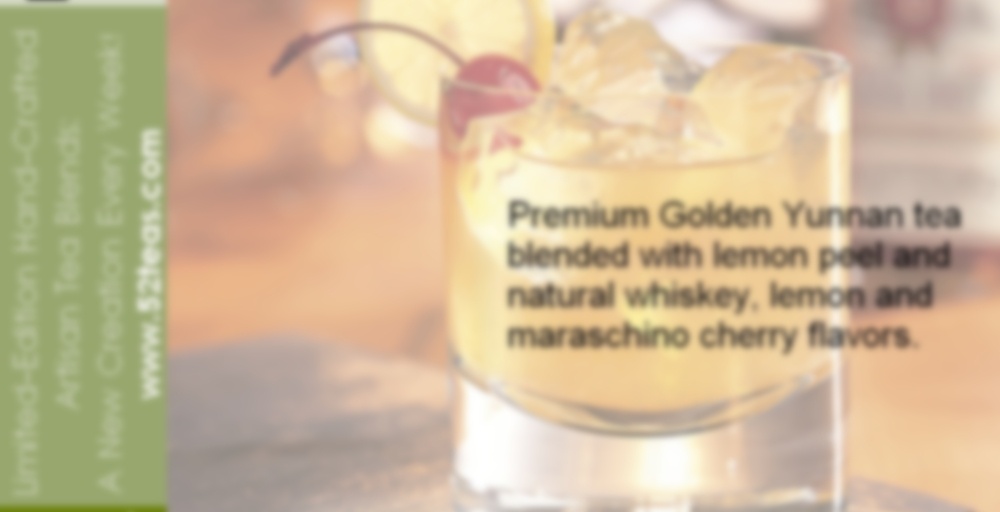 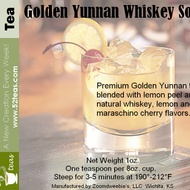 Ultra-premium golden Yunnan tea, blend it with lemon peel and natural whiskey-, lemon- and maraschino cherry flavors. This is all of the Yunnan I have, so when this is gone, it’s GONE.

I’ve been going through my tea stash, trying to reorganize it from the mess it has been, and I came across this tea … It’s been a while since I’ve had it, and it is still just as good as I remember it.

The Golden Yunnan base is delicious; bold, and not overpowered by the flavorings. As for the flavorings, yes, it tastes like a whiskey sour. Good, full whiskey flavor, just a hint (more like a whisper) of cherry, and somehow Frank managed to make this taste like there’s actual sweet & sour mixer blended in. It’s not as strong on the “sour” part as I prefer…then again, if this were the lock-your-jaw sour that I prefer, very few others would like it…or even make it past the first sip.

Frank, you’re a tea-blending genius. I firmly believe that this should be in the permanent collection, and that you should enter it into the North American Tea competition next year.

I’m thinking moving this to ManTeas would be even better, but I didn’t want to risk the chance of that not happening- I ordered mine yesterday.

It would be a good ManTeas blend. I’m already wanting another cup, but it’s all the way at my house. :-(

This stuff sounds awesome, and I concur with the ManTeas bid.

I’m actually working on some stiffer stuff for ManTeas. I’ve been having one heck of a time sourcing a worm to put in the pouches though. But have no fear, I will figure it out. :D

Frank, speaking of worms- I DID have a really good chili pepper tequila once…

Oh, tequila…Jose is never kind to me the next morning, so I would be all for a good tequila blend.

But no worms, please. I’m terrified of worms.

Last week I woke up and went into the living room, turned on the light, and screamed bloody murder because I thought there was a worm in the middle of the floor.

Give me snakes, spiders, anything. But no worms.

I was hoping for more with this one but I did find the Golden Yunnan base tasty and as it should taste. The whiskey flavor and cherry essence was a bit difficult to detect. I did love the smell of the dry leaf and was hoping so much for the flavor to translate. Still it was pretty good. My hubby loved the idea of it.

This tea seemed like the perfect thing to help warm me up on this bad weather day. And since I don’t have to go to work today, it just seemed right (and almost forbidden) to start the day off with a Whiskey Sour tea. I think Frank nailed this tea. The Yunnan is smooth and slightly malty (but only noticeably malty when milk is added), just enough of the Whiskey flavor to rival the actual thing and of course the perfect amount of lemon and cherry flavors. Wow, this stuff is good.

I don’t know what a whiskey sour is supposed to taste like, but this doesn’t taste to me like there is any flavouring. However, the base is fantastic, rich and flavourful. It’s probably age that has killed the flavour, but it’s still a great cup because of the base tea.

I still don’t think this screams “whiskey sour” to me; it just lacks acidity/tartness which I think is an important part to any ‘sour’ style drink. However, it’s very full bodied and thick and has really nice malt notes with hints of smoke, cocoa, and lemon peel and I can definitely really appreciate that aspect of it. That’s what I wanted this morning when I selected this – so I was happy it delivered on my flavour expectations.

Here’s another one that brought a smile to my face when I read the name on its empty packet.

No, she is not. Unfortunately, with as busy as I have been at working toward getting caught up, I just haven’t had the time for that. :(

Hopefully, at some point, I will get caught up and I can return to that. That’s the plan.

Thanks, Anne! Hope you are also building in some time for a break.

Break? Unfamiliar with this term. :)

Made this as a teapop thinking it would be the perfect accompaniment to my meat pie dinner. However, the teapop is highlighting a citrus black tea with the slightest hint of cherry. If I didn’t know better, I would think someone brewed me a cup of Red Rose which just isn’t my favorite. I’ll reserve judgement until I try this plain though.

this one never really gelled for me…decent enough but not what i wanted it to be.

Still not sure how i feel about this one. It’s sort of like a black tea with hints of flavour hanging around in the background. I think it’s more flavourful when it’s hotter…as it cools it changes a little and seem more black tea than anything. I’ll try adding a bit of sugar next time to see if that helps (if i remember)

How long did you steep for?

whatever the instructions say? haha i think it’s 2.5mins

I was so curious about this one. So on the fence! Curious how it does iced now