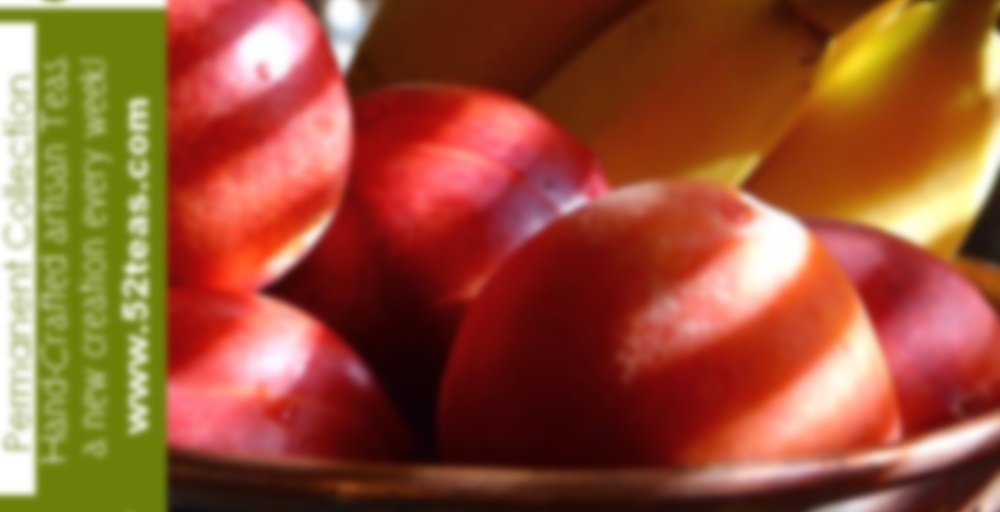 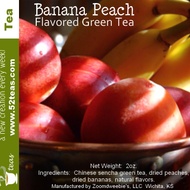 Banana peach flavored green tea with real no-sugar-added dried banana and peach pieces. Think of it like tea with a hint of cool refreshing fruit smoothie added in.

I brewed some of this for today’s iced tea sipping. Delicious as always … still one of my faves from 52Teas … this one is perfectly peach and banana. Love it.

I miss this tea. I still can’t understand why it was never very popular. I guess when you offer stuff like Butterbeer and bacon tea, banana peach is just ho hum. LOL.

NO! I want to try this Frank bring it back!

Frank there are new tea drinkers all the time to make an old GOOD idea profitable! :)

Frank: I don’t know why it was not popular either… I understand that the combo may seem a little on the mild side compared to some of your other amazing blends, but, the balance of flavors is just so magnificent here. Definitely one of my favorite ones iced. Sadly, my stash is nearly gone, I think I have enough for one more pitcher of iced tea.

This would be a great addition to the SBT line then!

What a pefect flavor combo!

I too really liked this one when I tried it in the first 12 Xmas teas sampler. I didn’t think I would before I had it, but it was eminently sipable.

Another Christmas tea sample from 52teas. There is such a strong banana aroma to this tea that I had to increase the rating from the last tasting. The flavor that comes through is a smooth sweet sencha with banana and light peach flavors. I really am getting banana candy taste in this tea. I used the whole sample (about 4 tsp) in a 3 cup teapot and steeped for 2 minutes. There were several floaty bits in this tea, but I blame my strainer as it wasn’t as fine a strainer as the IngenuTea strainer I usually use. This tea was very warming and exactly what I didn’t know I needed tonight. Very delicious!

Another sample from LiberTEAS! Yum!

This one smells oddly familiar to me; I wonder if it’s another 52teas blend that I’m thinking of? I can’t place it though. It’s a good sort of familiar though! It does smell banana-y/peachy.

I steeped this one for a conservative 2 minutes, and it perhaps could have used a bit more to add a bit of strength, but the plus side is that I’m rewarded with zero astringency! And the flavours are still there. I can taste a bit of seaweedy green tea, and then a delicious peachy flavour comes out, with creamy banana lurking in the background. I feel like the peach flavour isn’t quite as tasty as I would have liked – it tastes almost like a slightly underripe peach where the flavour isn’t fully developed, instead of a juicy, ripe, dripping peach. Still tasty though. A bit of sugar would perhaps make the flavours come out more, but I am still determined to avoid that!

I had written off most flavoured green teas because I wasn’t enjoying them, but this one is good. I think it’s partially because for whatever reason, I’m not always a big fan of citrus mixed with green tea, and DavidsTea put out what seemed like quite a number of those recently, none of which I particularly cared for.

I’m looking forward to additional infusions of this one… there’s a big chunk of presumably peach in my infuser, and I’m hoping that a bit of sitting wet will help the flavour to come out in the second cup. I’m contemplating cold-brewing the rest of my sample of this one, as I think it would do well…

This blend was on 52Teas Permanent list for quite awhile so you may have ordered it in the past (?). I’d been meaning to try some too, but then Frank discontinued it. :(

Good idea, but I haven’t made enough 52teas orders to have ordered that one. I’m not sure it was even still around when I found out about the company! I’m wondering if it’s reminding me of the tea I had from Le Palais des Thes…

This was one of MY favorites, and I kept it on the permanent list for a while largely so I could have some, but it didn’t sell very well.

I think it’s one of the better flavoured greens I’ve had. :)

This one didn’t have enough banana in it for me. But it’s not half bad. Not sure how old this one is, but I suspect the banana flavouring might have been stronger in he the beginning. The green tea base is pretty even keel. Thanks Kittenna!

A green tea with banana and peaches, what will they think of next. This is a sencha that even I can like. Im not a fan of plain sencha but I love this one. I can really taste the banana and the peach is underlying in the background.

What is the level of banana? I HATE Bananas but am curious about this tea especially because of the green tea and peach…

The taste isn’t heavy banana but its there.

Hmm. I could hardly taste the banana at all! But, I may not have been in top tasting form. :)

I’ve actually backlogged this on the same day!

Oh, Frank!! I’m so excited that this tea is included in the sampler!! I love bananas and peaches, and have been eyeing this one really hard!

I’m loving this one!! It’s full-on banana madness, with a side party of peach, and there’s still green tea, and it’s delicious. I bet it’d be awesome iced in the summer; I’m really enjoying it hot!

I taste the banana and I taste the peach. It was alright for me. A little syrupy in taste but I gave more points for accuracy and the suspicion that it probably makes a killer iced tea.

I was THRILLED when I opened this up for the tea of the day! I have been eyeing this tea on the website and am so glad I got to “sample” it! I love it! Nice sweet green tea… can taste the banana and peach but again neither flavor overpowering.

Bananas and peaches?
I don’t think I’ve ever encountered this particular flavor combination in a tea, although I’m sure Jamba Juice has a smoothie or two with both fruits in it. Thanks to the sample that Liberteas sent, I’ll be trying this tea out, iced.

It smells wonderful, nice and fruity.

Yum! The banana really pops in this tea. The peach isn’t as strong, but I know it’s there because of the sweetness that lingers on the tongue. It’s another great summer blend from 52teas.

Ahhh… Jamba Juice. They stole my matcha OJ idea! lol. No, just kidding. I do; however, think it’s funny I started drinking matcha OJ even before I knew they sold matcha lol.

Mildy fruity and faintly candy-esque. And the chinese green sencha really does taste buttery! Very smooth and almost creamy in the aftertaste.

I sense banana taffy and peach jolly ranchers—but it’s not cloying at all—just a sweetness that serves to enhance the “softness” of the green tea.