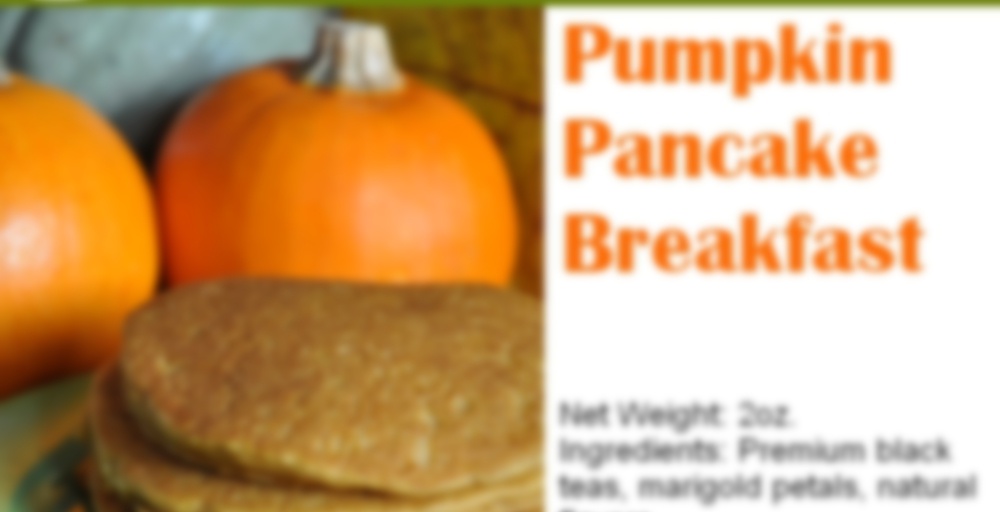 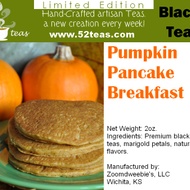 After creating our Pumpkin Cheesecake blend last week, I was bitten by the pumpkin bug, and reminded of the delicious pumpkin pancakes my wife likes to make. As popular as our pancake breakfast tea is, I thought this could be just as popular–a Pumpkin Pancake Breakfast tea.

Here is the essence of pumpkin pancakes, drizzled in warm maple syrup and topped with a touch of fresh creamy butter. (To our vegan friends, I assure you this is still 100% Vegan, and we only use natural flavors–something of a miracle, if you ask me, but a delicious miracle.)

I just opened one of my drawers filled with tea and grabbed this one as it was the first black tea that I could immediately recognize as a black tea, and I wanted black tea. This package is almost gone, I think there is probably just enough for one more pot of tea, so I think I will send what I’ve left to my SororiTea Sister so that she can try it too.

What I am really liking about this tea is the crispy-edges-of-the-pancake taste. When I make pancakes, I usually circle them with a little butter to make the edges get crispy… that’s my favorite part of the pancake, and somehow, Frank has managed to capture that taste in this tea. It’s really quite amazing to me. And YUMMY!

The crispy edge is EXACTLY the best part of the pancake!

pumpkins and pancakes? count me in!

This is one of my favorite 52Teas blends.

I so want to try some 52Teas blends.

Special thanks to LiberTEAs for this one!
This smells wonderful! I can smell pancakes, maple syrup, butter, pumpkin, and a hint of spice…maybe cinnamon or nutmeg…not sure…but it’s lovely! It sort of reminds me of a Country Folk Shop with Decor and Scented Candles in it!

The taste is a nice medium strength black tea base with a bit of pumpkin and spice and a just a touch of butter and syrup type flavors.

I do like the aroma more than the taste but the flavor makes sense! It’s sturdy and true to it’s name! That’s always a plus! Neat flavored Tea from Frank as always! Always KUDOS for it being Vegan, too!!!

I ordered this tea because I love pancakes and I adore almost everything pumpkin. I was not expecting this to truly taste like pumpkin pancakes, but I was excited to get a new and sure to be yummy tea. Wow, I should not have doubted Frank’s magical tea skills! This tea is smooth with a spicy pumpkin taste backed up with a bready pancake essence complete with maple syrup perfection and a hint of butter. With each sip, I expect the magical qualities of this tea to disappear, but the pancake goodness just keeps coming.

I was looking for a tea to make me happy this morning on my last day off for a while – lo and behold, I found the tin of this that I mixed with my last bit of pumpkin cheesecake last year. I really can’t believe it’s been a year… but it has.

Anyways! It was better than I remembered. A hint of maple, a bit of pumpkin, nicely balanced spices all tied together with a smooth black tea. I added brown sugar and milk, and it did indeed make for a happy morning.

oh lord. I missed so many yummy teas from 52Teas :(

Thanks to Dinosara for sending me this one. So I’m torn on whether I like this one or not. I can taste a little bit of maple and a little bit of pumpkin, but it’s more of those spices that go with the pumpkin. So it’s more like a Christmas/pumpkin spice tea. The black tea base is still a little bit weak for me. It’s decent but I don’t know if would jump at the bit to buy a re-blend of this one. I’m glad to try it though.

So I haven’t tried this one plain, but given my track record with 52teas black teas, I’m not going to bother. That also means I’m not going to rate it because I always rate a tea sans additions. That being said, this was fairly tasty with milk and maple syrup to sweeten. I think I could have done a slightly higher tea:milk ratio (favoring tea), but it was decidedly pumpkiny all the same. It has a pumpkin flavor that’s less pie or sweet bread, but of uncooked pumpkin puree. That might not sound as appealing, but it’s actually a nice authentic tasting flavor and it means that the tea tastes really like pumpkin, not just pumpkin pie spices (which often seem to be used to give something a “pumpkin” flavor without actually any pumpkin flavor). I don’t get a lot of maple flavor, even with the addition of the maple syrup, nor buttery pancakes, but those could have been wiped out by the milk a bit.

Overall I did enjoy this one with milk and sweetener, which really helped the pumpkin come out and not get overwhelmed by the black tea.

I like this tea; the pumpkin flavor definitely comes through, along with a bit of maple. However, the black tea underneath seems a little on the bitter side. I had to add more sweetener than I would normally use with a black tea. And I definitely did not overbrew it. It’s good, but not great.

I’m tasting a lot more pumpkin flavour in this tea than I got from the other 52Teas pumpkin blends, which I appreciate. I’m not getting the pancake part as much though, even with added milk and some agave nectar. The tea tastes rather bakey, but it’s sort of a generic bakey and nothing like syrup or butter in my opinion. Even so, I’m enjoying this tea, it has a comfortable, homey feel to it.

ok, not really my favorite. I agree with the reviewer that said she tasted a bit of bitterness in the black tea. I tried steeping this a couple of different ways/times and it didn’t really come out so well for me. I’m also not sure I like a lot of flavored black teas because it is difficult to get the tea/flavor balance really right.

A great pumpkin tea. Not sure what else to say that already has not been said, but the aroma is awesome…Great pumpkin/sweet/syrupy flavor, but the tea also comes through. A little sugar and maybe some (soy) milk helps it along.
Perfect for October & November

I love the flavor, but I don’t like that you can’t buy it at any time.