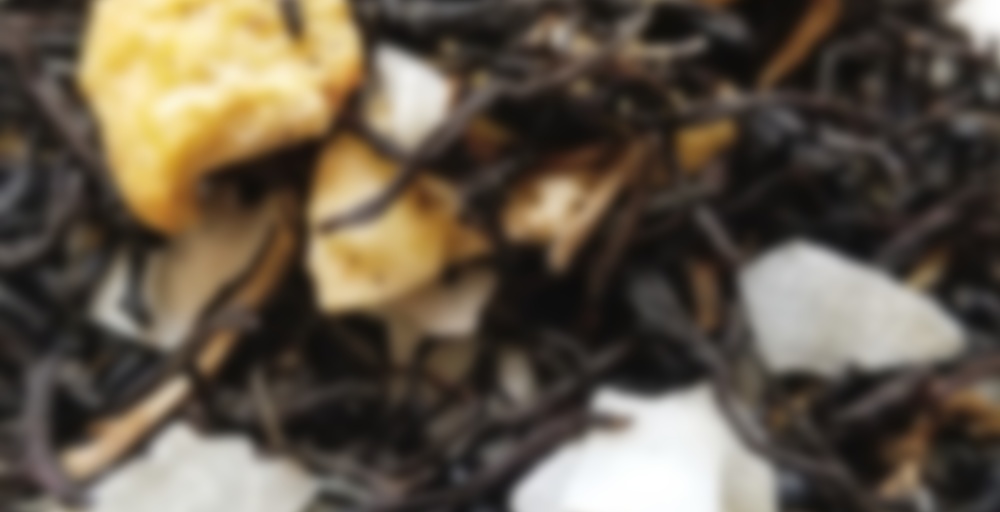 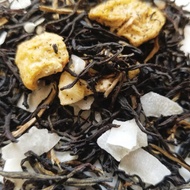 Anne's Gone Bananas . . . and Maybe a Little (Coco)nuts Too!

My very first JUST BECAUSE Tea!

What does ‘just because tea’ mean? It means this is a blend I created just because I wanted to! Not a tea of the week, not a special VIT – just something I created during a much needed ‘tea play time’!

Last month, I did something that I don’t often do. I went into the tea studio and I just played around with tea. I know that maybe some of you think that’s ALL I do – but really, when I usually enter the tea studio, I do so with a plan and a specific recipe in mind. This time, I didn’t – although, given how behind I have been over the past few months, I probably SHOULD have been geared with a plan. But I just decided that I needed a ‘free day’ – it was time to just do something fun.

And this is the tea that resulted from my play day. I combined an array of black teas: Yunnan Gold, Fujian, 2 distinctly different Assamica varieties, as well as some Assam and Ceylon. This combination creates a very rich, smooth cuppa – very flavorful!

After I finished putting these teas into my blending pan, I added bananas. Because – bananas. I love banana teas and I probably could make a banana tea every month and not get tired of it. YOU might get tired of it though, and I do need to consider you in my thought process – but since this was my play day, I reached for one of my favorite flavors – banana! Then I grabbed some coconut because coconut and banana play very nicely together (and because I love coconut almost as much as I love banana).

Then, because I can never leave well enough alone, I added some vanilla bean for an additional creamy element (because you know, bananas and coconut apparently isn’t creamy enough)! It wasn’t until I was finished blending all of these flavors that I realized that this would probably turn out to be very similar to our Banana Pudding tea except, of course, the black tea base is significantly different – so there is that.

Anyway, now that I’m finished processing subscriptions for November, I decided to go back to my play day pan and see what came of the blend I crafted that day.

YUM! I guess it comes as no surprise that this does remind me quite a bit of the banana pudding tea (as I thought it would). But this is different – and not just from the base. I added more coconut to this (which comes from going into the studio without a recipe in hand and just going freestyle). There’s a little less ‘vanilla/creamy’ and a bit more coconut and banana.

Two fruits and a nut

A Little Bit of Love

Apologies for the notes from memory. I really need to a) drink more tea, b) write my notes when I actually drink the tea, and c) organize my tea stash.

I drank this last week, one cup with milk and one without. The coconut was a lot more prominent than the banana and thankfully the copout wasn’t rancid or soapy. Still very fresh and sweet. Great for a tea that I bought… a year and a half ago? I suck.

This tea, however, does not suck. It was scrumptious.

Gah! Still no wifi at home, but I’ve hauled my laptop to a cafe to download a few things from my webmail before it disappears altogether: hence, having my real steepster self back. (My webmail allowance is teeny.) Fortunately, the cafe has wifi and air conditioning because the humidity continues to be brutal here. Sadly, or happily depending on how you look at it, the AC is better than the wifi. And the person here is cursing me with hiphop, and not even good hiphop. Good to know which places I will not further frequent. Gah and gah again.

Trying this for the first time, though not in the cafe. Darn tasty. Reminds me of my beloved Banana Pudding.

The Humidity is pretty brutal here as well. I also don’t have AC unfortunately.

Gah! Poor you. Poor us. Either I continue to have less tolerance than ever before or it is getting far more humid as the years pass.

Good bye tasty tea! You shall be missed.

Anne is NOT bananas or coconuts because this is the perfect banana and coconut blend.

Aww – thanks – but I’m pretty sure you’ll get some disagreement from my family. LOL

Additional notes: I saw that Coconut Banana Cream Pie Houjicha is reblended! One of my beloved blends from 52Teas. However, I can’t justify an order right now (especially do to my self imposed tea-buy ban at the moment), so I will console myself with this lovely blend and hope one day it will be reblended yet again. I’m very happy to hear it won the Christmas box poll though… that means others wanted to see it again. I must make a note: this one isn’t tasty enough for me without that extra teaspoon. I like it with a teaspoon and a half the best. The coconut is still spectacular!

Oh my, maybe it’s a good thing I missed out on it. I can’t justify ordering either haha.

I know. sigh. They sold out quick, so I hope whoever bought them loves them!

BANANA love banana give me all of the banana banana banana. This is my first banana tea, and I was a little skeptical how the flavor would translate just by sitting it in some hot water, essentially. With 52teas, I should have known I’d be in good hands. The dry sniff is so delightful – my lovely banana with just the perfect hit of coconut and the slight note of malty black tea in the background. I’m really picky with my blacks, but this is a great base for the other flavors. Just a really delicious well-rounded tea.
I immediately went to order more and it’s GONE! :( If I’m going to be a 52teas customer for life, I’m going to have to get used to the pain of losing the LEs….

After drinking about six mugs yesterday I opted to leave this cup by my bedside overnight. The results are delightful but that’s not too surprising; the combo of silky coconut on black tea does exceptionally well as a chilled or iced beverage.

This one reminds me a lot of Frank’s old acclaimed Coconut Black blend, but this one has more dimensions. The starchy-sweet banana works in perfect conjecture with the vanilla, in a supporting role that give the coconut extra rich texture and depth. This Coconut reminds me of the promised Coconut that originally started me on my loose leaf pilgrimage (utterances of rumours in first year dorms of a fabled Coconut Banana Cream Pie tea available somewhere downtown). This tea is getting me nostalgic.

Anyways, I’m a fan and would pick this up again in a heartbeat for iced tea season.

Six mugs in one day! You go, girl!

all done! last cup of this one is more banana than it has been, but still more coconut than banana. At least the banana came back to visit me today so that was a nice farewell :)