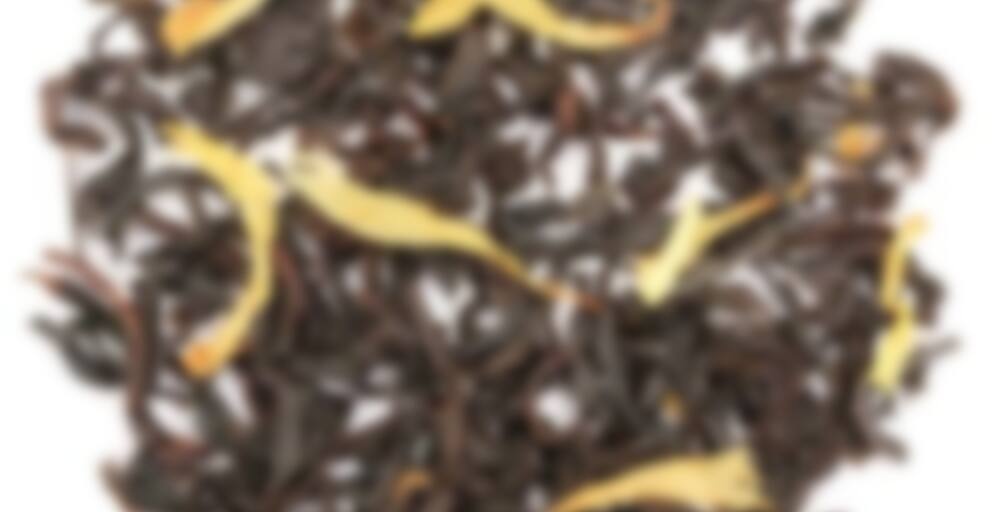 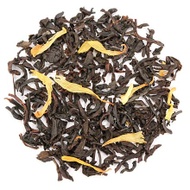 Imagine being whisked away to a perfumy, fresh apricot orchard… That’s the sensation you’ll get with your first sip of our delectable Apricot Black tea. Combining the sweet flavor of ripe summer apricots with the tangy bright taste of Ceylon black tea, you can experience it year-round. Soft, mellow mouthfeel, succulent flavor, and balanced astringency.

My fiancee and I went to the gym this morning and he showed me how to do a whole bunch of arm exercises. Now my arms are all jelloish and I can’t hardly move them, haha! This tea was on the top of the pile when I opened my tea drawer, so needless to say this will be the first cup of the day. The dry leaves smell like malty black tea and there is almost a chocolatey hint. There is also a scent of fresh fruit. The tea liquor aroma is more perfumey, with the smell of sweet, fresh apricots. There is a heavy, malty flavor with a sweet fruit finish. The apricot comes in with the aftertaste and is very light and wispy. Adding sweetener brings out a lot of the rich apricot flavors and makes me think that this would be a wonderful iced tea. Our milk is expired, so I didn’t add any milk today, but I remember from previous cups that the milk adds an almost creamy note to the apricot flavor. The apricot is a little artificial to me, but not overly so. I think Adagio said this tea was ‘soft’ and ‘mellow’ in the description, which is funny to me, because I find it to be rather heavy from the strong black tea base. It’s still a nice tea, either way. I’m glad I like this cup because I don’t have the arm strength to make a different one! You’d think that lifting the tea kettle so often throughout the day would’ve at least given me some arm muscle to start with! :)

This is the first I’ve tasted from the Flavors sampler, and I have to say I was pleasantly surprised.

I think this is the first apricot tea I’ve had. I’ve tasted teas that have apricot notes, but not from added flavoring. And apricot is a flavor I like quite a bit.

Not sure what the orange petals are, maybe they’re from apricot flowers? The tea smells strongly and richly fruity, rather like the fruitiness of apricot jam. It made me think of the filling of apricot hamentashen, though that usually doesn’t have an aroma this rich.

The liquor has a pretty Ceylon reddish color, though it’s not the most striking of the Ceylon colors I’ve seen. This tea was probably a good choice as an apricot base, as it contributes some fruity aromatic notes of its own, separate and apart from the apricot.

It has a thick-ish mouthfeel that along with the flavor, does make it seem a reasonable facsimile of an apricot pastry, tea-style.

It isn’t overly complex, but it’s more interesting than some flavored blacks I have tasted that are stuck in a single or at most a dual dimension. This one has more to it than that.

Will be interesting to see how it compares to other apricot blacks, like the ones from Harney & Sons and American Tea Room.

I don’t know for sure, since I’ve never seen this tea up close and personal, but, I would guess that the orange petals are osmanthus petals which carry a fragrance and slight flavor that is similar to apricots (and peaches).

They may also be calendula petals which add to the appearance but not the flavor of the tea.

I have the Adagio site open and am deciding on my order right now—good timing! I think I will have to add the flavored samples now :)

Another one bites the dust. Like with the blueberry, it’s a bit stronger than I would normally have made it because of the amount of leaves I had left.

I see I gave it a mediocre rating, and that sort of thing always surprises me with a fruit tea. Did I really mean that? I have learned to start trusting myself with this though. Sometimes I push the rating up, but most times it’s left alone.

It’s steeping now and the pot is standing with the lid off (because I’m lazy and I can’t be bothered to search for it) about an arm’s lenght away and I can smell apricot all the way over here.

Yes, I was right about the rating. Again. It tastes like apricots, yes. But it’s a sort of creamy kind of apricot flavour. It actually tastes like there’s milk in it and there isn’t. It’s the wrong sort of sweet. I could have wished for some freshness. So while it does have apricot flavour, fresh apricots don’t taste like this.

I’m getting low on this…enough for one more cup after this one. This is probably in my Top 5 Flavored Blacks from Adagio. The aroma is awesome, too!

I keep hearing good things about this tea. I should try it next time I order…

oh yum! I brewed this differently (being home from college, was able to be extra attentive to the brewing) and it turned out even BETTER than before. I love this tea. It’s one of my favorites.

I’m not usually a fan of flavored teas and this one is…well…fine. Not extraordinary, but very drinkable. It has a wonderful aroma while steeping. A light apricot flavor overlies a pretty standard Ceylon black. While the apricot note is creamy, the tartness overwhelmed the sweetness of the fruit for me. Cut with a little sugar and it’s a nice way to start your day.

This was the first tea I tasted from Adagio Teas and I was not disappointed! This tea has a very sweet aroma and taste to it, It is a little bitter so if you like some of your tea sweet like me, putting in a little sugar will make it perfect!

This is a decent iced tea, though I am not the biggest fan of it hot. The taste is a bit artificial and what flavor is there isn’t super strong.

I had such high hopes for this tea, but ultimately I was very glad I only bought a sample size. Maybe it has a flavor of apricots? I’m allergic to fresh apricots, so I can’t swear that it doesn’t. But what I was hoping for was a tea with the rich flavor of dried apricots, and that wasn’t what I got. I’ll drink what I bought, but I’m not buying it again. The black tea base that Adagio uses is, as usual, of good quality.

still one of my favorites – sweet and simple!