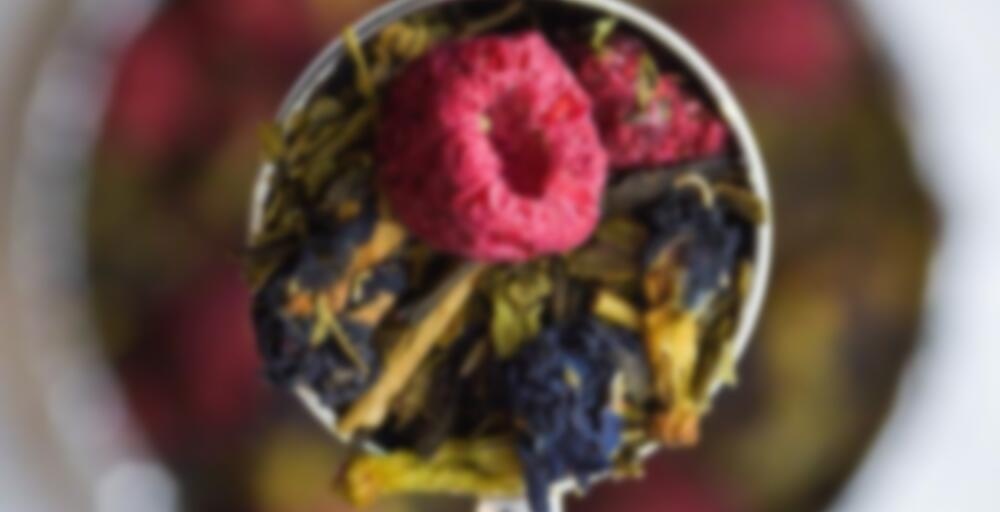 Our magic, colour changing tea, Blue Raspberry is here to stay! Have you tried it in a Unicorn Fizz yet?

The magical butterfly blue pea flower turns your cuppa a bright blue colour AND it’s totally natural. This pretty plant is full of antioxidants + our addition of raspberries + green tea makes it a green goddess indeed. Mixologist tip off – try adding a squeeze of lemon to watch the colour change!

This was a free sample in my Bird & Blend order, and honestly it’s probably about time that I finally try this tea – it is, after all, Bird & Blend’s “signature” tea that uses butterfly pea flower – and not only that but it was the first tea I ever came across with butterfly pea flower as an ingredient so it really introduced me to that ingredient, concept and trend.

Steeped up, it truly is an absolutely gorgeous dark pigmented blue colour – I can totally see why this was so ground breaking when it was released initially, and why people would totally eat it up. Especially with that “blue raspberry” flavour that plays so well of the steeped leaf colour. The tea actually does smell really fruity and candy sweet, like a blue raspberry slush puppy. It’s making me feel really nostalgic!

The taste doesn’t live up as much to the smell in my opinion – it’s fruity and has a raspberry note but I think it lacks the punch of sugary sweetness that blue raspberry flavoured anything has. Like, blue raspberry is not a natural flavour – it should be almost fluorescent blue and just dripping in sugar. This is too mellow/natural to actually fit the vibe, in my own opinion. However, the raspberry notes that I am getting really aren’t unpleasant at all.

The unfortunate thing is that the green tea base is so appartent – it’s really grassy, almost like a wheat grass shot! Loaded up with all that chlorophyll “goodness” that I hate so much. So, for that reason alone, it’s not something that I would want to have on hand.

I totally see the market though and why this does so well! I would recommend it to someone looking for an interesting/unique fruity green tea, it’s just not for me.

Additional notes: Finishing this one. I don’t know why this second steep session was so different from the first. Maybe it’s a few months older now, maybe the packaging wasn’t good enough, maybe the leaves crumbled. But there was little raspberry here and a ton of seaish green tea flavor. Also, I have since the last time had a water test done and the results were way too much chlorine was being added by the water authority…. so maybe that is why this tea is a very bright blue without adding lemon: acidity from the ridiculous chlorine. The chlorine better not be ruining my good teas!
2019 sipdowns: 57

Butterfly Peaflower tea should be blue if you don’t add something acidic to the blend. If you put lemon in it, it turns purple. The more lemon juice you add, the darker the shade of purple it will turn (looking dark indigo if enough if added).

Alright, thanks for explaining… I just SEE the purple of the peaflower and think the tea should be that color until I add the lemon. haha

I’ve never really experimented with butterfly pea flower… I think I have at least one tea with it, though – I want to see the colour change!

Holiday Tea-son! This is another addition to the Bird & Blend advent calendar that I decided I’d rather have cold than warm, so I cut open my sachet and let the leaf cold brew in 350ml of water today. Now I’ve strained the cup and am ready to try it out.

I have had plain ol’ Butterfly Pea Flower tea before; the herbaceous, earthy taste of it used to be something I didn’t like, but my palate has sort of adapted to over time. I’ve never tried it iced before, though I have added it to a few pitchers of iced tea in the past just for the color. The flavor of the pea flower is coming off very strongly in this cup, as I’m getting that somewhat earthy, brocolli-like vegetal taste to the forefront; in fact, I’m hardly tasting the raspberry. Maybe that was luck of the draw with my teabag, I don’t know. I can smell a bit of raspberry from my cup, but the flavor just doesn’t seem to be strong enough to really be holding its own against how strong of a flavor the butterfly pea flower is, and if they wanted to emphasize the raspberry, then they needed either more flavoring or less pea flower to get a better balance (unless my teabag was just a bad representation of the balance of the blend, I’ve certainly already had that happen once).

Had I had the time, I would’ve made some lemonade to brew this in, as I think that would’ve been even better. I think coldbrewing a bit more leaf in some lemonade rather than water would probably be the way to go with this one. Lacking the time to make a pitcher of lemonade for one little teabag of leaf, I just added some liquid sugar and a dash of lemon juice, and unsurprisingly, that did improve the cup a lot — my favorite way to drink plain butterfly pea flower tea is with lemon juice and honey (or lemon-infused honey!) so I know some sweetness and citrus helps temper that overly earthy/vegetal note just a bit. The citrus-sweet also helped bring a little of that hidden raspberry tang out, too. So this would definitely be a lemonade tea for me… would I buy it just for that, though? Eh, maybe in the 20g size. But it was a bit underwhelming to me taken plain, and certainly not the kind of tea I’d like taken warm.

Bird & Blend seems to really like their butterfly pea flower! This one is a green base with raspberry.

It seems rather weak. Bird & Blend doesn’t actually seem to specify how much water to use for their sachets. I generally use 12 ounces for a single sachet, but maybe I should reduce it to 8 ounces…

Anyway, the flavor is somewhat weak but not bad. The green tea is grassy with notes of dried leaves, and the raspberry flavor combined with the freeze-dried raspberries is very authentic. But it is rather one-note, and I find myself wanting another flavor or two. Perhaps some citrus or vanilla?

Not bad, but just okay.

This tea lemonade has sent next to me untouched for 8 hours and its still ice cold. Good job, perfect tumbler. In fact, there is still ice in here. I’m impressed.

Also now that ive tried it but should be sleeping, I’m sad i didnt drink this earlier. Its pretty refreshing. Of course the lemonade is crisp but the blue raspberry holds its own, contributing a nostalgic candy-like blue raspberry flavor. The stevia is dulled this way so thats good too. It’s nice though not necessarily my favorite.

ETA: This is still cold and its 30 hours later

Very much green tea in flavour. I feel the raspberries need to be brewed longer than the rest of the tea, so it’s a bit of an awkward blend. I ended up putting the raspberries directly in the tea after brewing. The colour is great and this is a fun tea, but the taste is not exceptional.

I’m definitely getting better at making Unicorn Fizz. I’ve had two decent cups on the trot now, which (when you consider my history with this tea) is a huge hallelujah moment.

It needs vanilla and honey, otherwise it just tastes funky. It needs lemonade, rather than sparkling water. It needs fussy picking to remove some of the butterfly pea flowers, because there are too many (at least in my bag, which is pretty old now) and to add in an extra piece of raspberry or two. Then, then, it’s halfway decent and I can see what the fuss is about. It’s pretty, for one, and the sour raspberry vibe it has going on is quite nice.

Unicorns wouldn’t drink it, though. I can tell you that much for free.