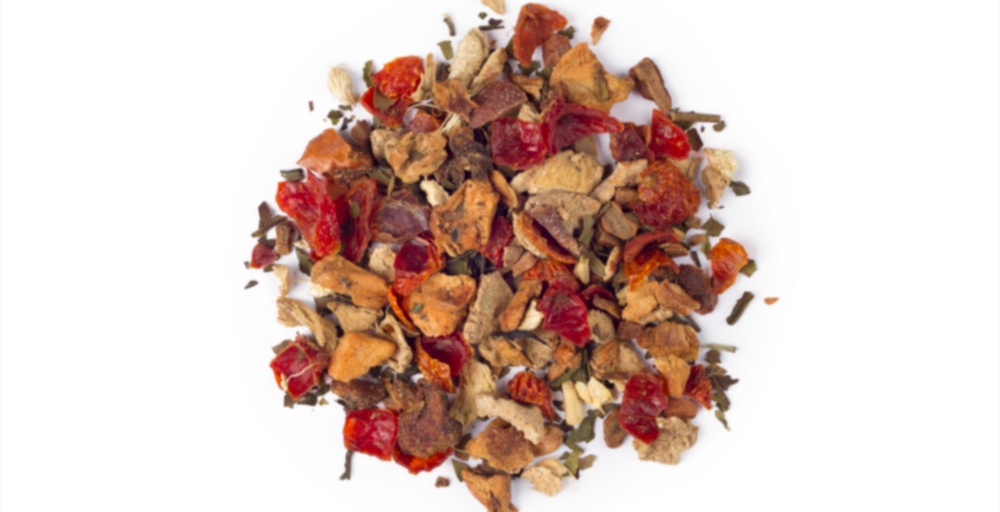 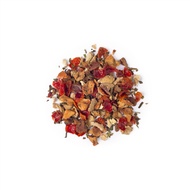 Some flavours are just made for each other. Pear and ginger are definitely two of them. The combo of sweet, delicate pear and warm, spicy ginger is more than the sum of its parts – especially in this perfectly balanced, organic white tea. With ginger, cinnamon, pear, apple and rosehips, it’s lightly spiced, lushly fruity and deliciously comforting. No wonder pear and ginger are so inseparable. They’re just so good together.

Happy National Pear Day! Today the prompt is to drink a tea with pear flavor notes.

Found this old (yet still sealed) bag that I purchased from a cupboard sale by Ost, back in 2018. Thank you, Ost!

Normally I won’t drink caffeinated tea after 6 p.m., but the dry leaf of this looked far more like a chunky fruit herbal blend than a flavored white tea blend, so I’m expecting anything from the tea leaves to be minimal enough to not effect my sleep (and if I’m wrong, at least tomorrow is Sunday).

I decided to steep this like I normally steep herbals as well… just a big, haphazard scoop into a fillable teabag that is left in the cup while I drink. The tea does have a nice, very pear forward aroma while steeping. On the tongue, I am getting a sort of mixed pear/apple fruity flavor, and, oddly enough, an unplaced floral note. Midsip and lingering after the swallow is a nice ginger flavor, certainly present, warming, and lingering, but not spicy-hot/burny. I’m tasting cinnamon as well, and I think the sweetness of the cinnamon is probably taking some of the edge off the ginger being spicy.

I like the flavor combo. I’m a big ginger fan but find ginger-forward teas tend to be too hot for me, and this is just the right balance of warming spice and sweet fruit.

I almost had this tea for pear day too but couldn’t find it! (I just found it today going through other teas.) I also was going to have it at night thinking there wasn’t TOO much white tea in it.

I’ve been enjoying it! So far it hasn’t appeared to affect my sleep. I can usually get away with houjicha after my cut-off period, as well. In general I only drink herbals at night, so I’ve been going through those waaaaaaay faster than my gobs of caffeinated tea.

Yeah, I noticed that too, as I need at least one caff-free option every day, but the caffeine options have so many types. haha

SIpdown Long overdue!
This is one of the oldest teas in my cupboard but finally finished it off today. I remember purchasing this and trying something completely new. I really struggled to drink this one I think it must be the flavoring the bothers me. Which is odd because a lot of people seem to like this one. I’m thinking that maybe this flavor combo just doesn’t work for me as a tea for some reason but until I try another Ginger Pear tea I won’t completely write this pairing off.

Fine, a little spicy, not too much tea taste.

HOT: This tea is very light and mild. It is soothing and has warm cinnamon notes pairing pleasantly with cool crisp pear/apple. The ginger is more of an aftertaste at the end, on the back of the tongue as you swallow. it is a lovely tea for the stressful holiday season.
I mildly enjoyed it hot, but it really tastes best made as a cold brew!

COLD: both the smell and the taste is reminiscent of a mild ginger beer, like when you mix lemon-lime soda with it. There is a much stronger spicy tone when it is cold, and the taste is somewhat stronger. It is also a little more bitter in taste when iced, but not unpleasantly so.

Day 8 of the 2016 advent calendar, and my first time actually having this tea hot. I’ve been meaning to review this tea because I actually love to have it iced for morning classes sometimes, since the ginger helps my vertigo. The tea does have a very strong pear smell to it, with a warm note of ginger in the back. I love the smell of this tea, I wish there was a candle of it.

Steeped, the tea has a light yellow-green colour and maintains its strong pear smell. Like its smell, the taste is also predominantly pear to me, with ginger on the back of my tongue. Ginger Pear is a very apt description of this tea.

Overall, this tea is delicious hot or iced, and I’m very happy that David’s seems to be keeping it around as a staple.

I really love this tea. I only recently tried it, and I don’t know why I didn’t try it sooner. It’s delicious. The ginger is very warming, and there’s a perfect balance between that, and the pear. Still trying to find the perfect steep time for it – but either way it’s good. I also enjoy this tea iced as well as hot. Overall, this is very yummy.

Shuffle, shuffle, shuffle through my teas and after about three other thoughts, ended up choosing this tea. Ginger upfront—boom. The pear is there somewhere gently, gently. The white tea is nowhere.

Years ago, I discovered canning and got so revved up that from the start of spring, I’d be preserving every fruit and vegetable as it became ripe. Delicious stuff. By autumn when pears came into season, I made pear and ginger preserves to serve with toast or on top of ice cream or applesauce. If I added a spoon of honey to this tea, the taste might take me in that direction.

Pear and ginger preserves! Oh, what a delicious thought….

Yes, they were a winner. Highly recommend that combination for the canners among you.

Or waffles or pancakes and so on.

OMG that would be so awesome on waffles or pancakes. I haven’t tried canning since I’m terrified of the whole sterling process but ginger pear is definitely a combination I’d try.

I was surprised at how much I took to it. It is quite a production, but it beautifully satisfying. I would never in a million years attempt canning anything containing meat or fish, but fruits and vegetables are pretty safe. It is easy to tell if things did not seal properly. I would suggest you try it. Why not?

A sample from Miss B, and today’s cold brew. I used my usual method of preparation – 2 tbsp of leaf in 2 litres of cold water, into the fridge for around 10 hours overnight. I think this one had me at hello, because the dry leaf smells so good. Very candy-pear, and something else – maybe quince? Delicious, anyway.

To taste, it’s just as wonderful as I’d hoped. The initial flavour is sweet candy-pear, very reminiscent of pear drops (especially in the way the flavour lingers). The ginger comes out in the mid-sip, very strong and spicy, and it makes for an unexpectedly delcious pairing with the much sweeter pear. I wasn’t sure whether the two flavours would go together at first, but it seems obvious now that they would.

This is one I’d happily drink hot as well, maybe in the autumn or early winter. It’s got a lovely spicy kick cold, and I can imagine it being a very warming cup on a cold day. I wish there were more pear teas around. They seem to be a relative rarity in the UK, and that makes me sad. More so because this one’s such a winner!

Really liked this one. The ginger is warming, which was quite welcome in my very cold office last week.

I picked up only 10g of this tea to try since it is an expensive one (cost almost 4$) Yikes! It has a wonderful aroma though and it tastes pretty good too. I enjoyed my cup but because of the high price of white teas, I only buy the ones that WOW me-this one didn’t.