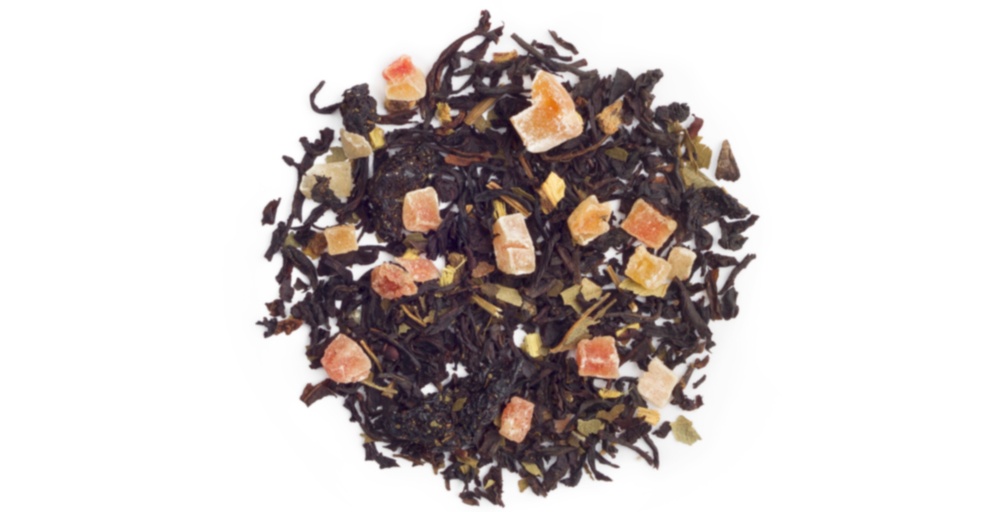 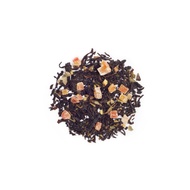 This sweet and refreshing black tea perfectly captures the taste of a black cherry soda. For a summer treat, try it over ice with a splash of sparkling water.

Steeped this up as a replacement cuppa for the sink-drain-bound-rancid-coconut-tea. I thought looking at this dry leaf there was coconut in it, too, and got worried (as I know this is very old, I believe I got this cup sampler from Ost in a 2018 cupboard sale, and have no idea how old it was when she graciously gifted it to me then!), but double-checking the ingredients, it is just finely diced licorice root I’m seeing (unlike y’all, I like licorice, so that’s fine). Dodged a bullet there, phew!

Steeped up, the liquor is a pretty red color, and it does smell quite nice, albeit I can’t help but be reminded of the cherry cough syrups I had to take as a child from the scent. While I am getting a bit of that from the cherry flavor in this tea, it doesn’t wane entirely medicinal since I am tasting the black base… albeit much more faintly than I’d prefer, which I believe is entirely due to either age or amount of sample leaf I had available. If that maltiness were just a bit more present/stronger, I think the black cherry flavor wouldn’t have quite the dominance that I’m getting in this particular cup, and its that flavor that keeps swinging my head toward cough syrup. The flavoring itself is actually quite spot on for what it is trying to capture and the tea is very sweet and smooth. I can see where it is going, but it doesn’t quite get there for me. I’m willing to swing my rating a bit more generous than I’m actually feeling since I do believe age may have affected the base more than I’d prefer.

Thank you, Ost! Very glad to have had the chance to try a tea from DT’s past! They are a rarity in my particular area of the US.

Tastes like it has stevia, but I think it’s the blackberry leaf. The bottom of the bag is always the worst for that sort of thing! Either way, this is kind of a mediocre tea, and always was – it does taste like a sweet, candy cherry, without a great deal of black tea base, but the sweetness is a bit much (at least in this cup), and it’s just not quite working for me. I still haven’t found that perfect cherry tea…

This tea is quickly becoming one of my go-tos. I just love it. A bright juicy burst from the cherry that isn’t overly sweet or tart, with a sturdy black base that always picks me up.

This made an amazing tea pop

How did you do tea pop? Brew a strong cup and then dilute it with carbonated water?

I brewed about 4 perfect teaspoons in like 4 oz of water and poured it over ice (a 16 0z mug filled about 2/3 of the way with ice) then topped it up with carbonated water.

So, when you work in retail the holidays definitely have a different schedule than the rest of the world’s… when it comes to Halloween, in the retail world that kicks off in August. Ugh.

So at the store I work at; we’re doing Halloween set up this week. Basically, a third of the sales floor converts to Halloween stuff. We’ve already done take down last week so this week has just been receiving our Halloween shipment and getting it up. In order to do this, we’re working in two (voluntary, because this is all over time) crews: an evening crew and an overnight crew. I’m on the evening crew which runs from 5PM to 10PM after my normal shift of 7:30AM to 4PM – the overnight crew works from 9PM to 5AM. Instead of sleeping at my place, I’ve been staying at my mom’s because the commute to and from work is MUCH easier: if I was going back to my place I’d get home from work at midnight and then have to get up FOR work at 5:30, like usual. Nope – not doing that.

So last night I came ‘home’ from doing Halloween and my mom saw I was just exhausted from unpacking pallets of stuff and offered to make me a cup of tea. No one ever offers to make me the tea so how could I refuse!?

This is what she picked out: honestly, I don’t actually remember when this tea got released!? DT has been releasing so many teas recently that it’s just hard to keep up with them all but even still I just genuinely have no recollection of this one. It’s from her stash, not mine. Anywho, she made it with milk added which isn’t a choice I probably would have made myself but who am I to complain when someone else did all the work for me.

It was pretty good; I want to say it reminded me a lot of those Sour Cherry Blaster candies but the creaminess of the milk negates that just a little bit. Agh; milk just doesn’t have a place with this blend! I mean, creamy cherry is totally a thing but if you’re going for a creamy cherry flavour you definitely have to commit and this isn’t committed to that profile/geared towards that sort of flavour. The cherry notes were good though! Bright, just sweet enough – a cross between realistic and candy. I don’t know; it’s kind of punchy? I’m looking at the ingredients list right now (which I didn’t have last night) and it’s got licorice root in it – I’m impressed though ‘cause I definitely didn’t taste it. So, you know, it was good for how it was prepared for me…

I think DT Black Cherry was released last spring/summer. Could be wrong, but..

I love black cherry soda so now that I have my new found tea pop making skills, I could think of no better way to finish off the leaf.

I’m actually impressed because this does taste pretty similar to a black cherry soda, albeit a more watered down version and with a slightly stronger taste of carbonation. It’s also slightly astringent at times. Still, I can definitely get black cherry from this and that’s pretty awesome. A great way to say good bye.

Hmm, I thought I had already reviewed this but I guess I didn’t so I’ll do it now. I’m having a iced cup of this since I don’t have it too often and I’m starting to get into the iced tea season now. This is much better iced than it is hot. Nice cherry & licorice flavour. Although I’m careful about the steeping times, since it does tend to get bitter quickly. I like it though.

I purchased this tea while travelling this summer! I figured it would be a good refresher for the long travel days! I first tried it cold in store. Though I enjoyed it, it wasn’t as strong as I would have liked. I love my black teas extra strong. Because of this, I purchased 50g to have to make my way! I like it stronger much better, especially when it is iced. I don’t think it really needs it, as the tea itself is pretty sweet, but I love this with a little bit of sweetner in it. Definitely helps bring out the soda flavour.

I also tried this tea hot and enjoyed it, but I would say that it is a lot better cold than hot.

All in all, I’m glad that I purchased this tea, and I’m glad I still have some left. I won’t be heartbroken when my stash is gone, but I will have enjoyed my time with it!

The cherry flavoring is quite strong in this tea, but it is still enjoyable. I may try this iced next time just to see if I like it better. And perhaps a weaker brew, too.

How depressing. It smells so delectable!
I get something vaguely fruity and syrupy in my cup, but certainly not cherry. Definitely not a repurchase. Unless the cold brew blows me away.

It has licorice in it, so I knew to stay away. I did not even smell to get tempted. Lol!

Cold brew is SO much better! Not sure if it is repurchase better, but it is a lot better.

thankyou for the heads up, ill stay away from this tea

lol Plunkybug actually I don’t notice the licorice at all. But thanks for the tip Dustin! I’ll try it that way next.
Kirk, it isn’t awful… just lacklustre :)

It basically just tasted like cherry cough syrup… I really did not enjoy this tea because of its artificial and medicinal flavour. It doesn’t taste like cherry coke, that’s for sure