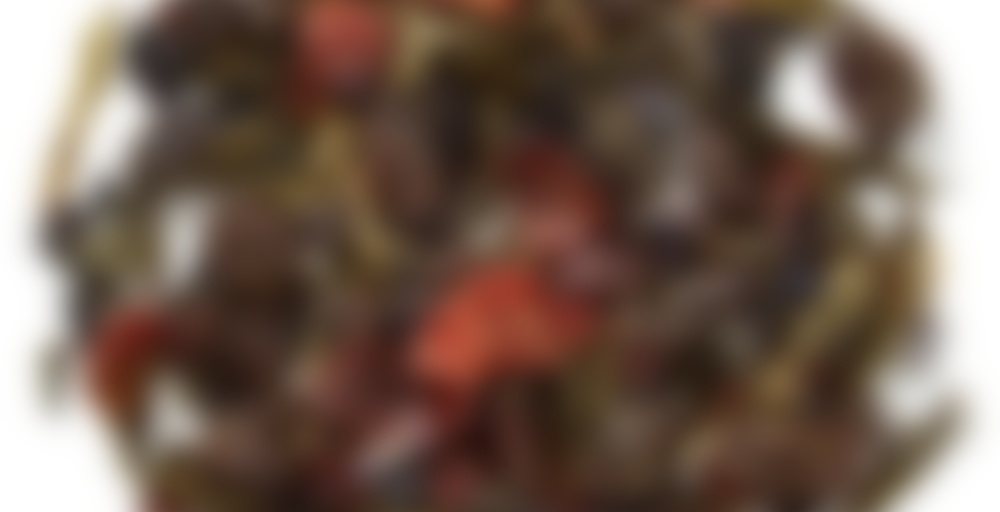 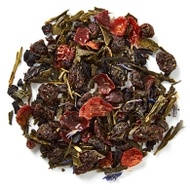 Remember when you were a kid and wanted grape everything? Grape juice. Grape freezies. Grape popsicles. Not to mention the occasional grape-stained T-shirt…Well, get ready to take a trip down memory lane – because we just put all your childhood favourites into this refreshingly fruity green tea. It’s got black currant, exotic garcinia and a cool burst of sweet, juicy grape. The best part? It’s amazing hot, chilled or frozen into ice pops. Have a grape day!

I got a sample to take home. I think I need some more!! Grape is one of those flavours I don’t mind when strong. Actually, I quite enjoy it. Definitely a mood tea. Not for when I crave real green tea. Ha. I mean, some flavoured ones do have a tea note, but in this one I find it mostly overpowered.
Anyhow. Not sure if it has stevia or not, as the package makes no mention of it, but other reviews I see says it does. Also, the ingredients list here on Steepster mentions sugar. Hmmm.

Today was a bit odd though. The boyfriend was cooking up some ribs… and drinking this with the scent of super fragrant meat baking is just strange!

This tea could do without the stevia. Otherwise, I love the strong grape flavour. It tastes like a grape snow cone if you have it over ice.

I wish you would bring this one back. It truly reminds me of a grape popsicle and is so refreshing as an iced tea!

Stopped at DAVIDsTEA on my way home from work today; I’m usually super on top of trying the newer teas but somehow I’m only just now getting around to getting samples of the Boardwalk Collection…

My haul today:
10g of Cotton Candy (I’ve tried this before; just wanted a bit to revisit it)
20g of Coco Colada
20g of Maracuja Mango
20g of Cinnamint Mate (Another that I’ve tried and just wanted more of)
20g of Chocolate Covered Banana
A few of the newer tea infused chocolate bars
And this, To Go and iced.

I didn’t get a sample of this one because I actually thought I’d dislike it – but I wanted to try it anyway so it’s what I chose for my iced tea for the bus ride home. I was kind of taken aback though, because it was really cool. It tastes EXACTLY like a grape freezie/slushie. And you all know what I’m talking about; it tasted like that sweet, grape candy flavouring that’s best described simply as: “PURPLE”. There was a bit of a playful tartness at the top of the sip (from the rosehips, I believe) but the rest was just very refreshing, summery grape freezie. Yeah, it isn’t the most natural tasting grape flavour in the world but anyone who’s going into drinking this and expecting a more natural taste grape flavour probably doesn’t fully grasp what DT was going for with this one.

That lovely, grapey body note is finished off with a mild grassy finish that lingers briefly in the aftertaste. It’s a nice presence in the sip because it kind of reminds me that I am drinking tea. The reason I actually expected to dislike this one was a combination of the base and the stevia but surprisingly neither were an issue while I was drinking this. If anything, I actually kind of regret NOT getting a sample in addition to my iced tea.

Kudos to DT for nailing the flavour they set out to.

mmmmm I had this today because they were giving out free iced teas and really enjoyed this. It really tastes like grape soda and is fruity and sweet. I like the sweetness even though I didn’t add anything to it.

Drank this the other day; it was tasty enough, and I think I got about 3 infusions, which is impressive for an aging flavoured green. I don’t think it was quite as sweet/cloying as it used to be, which honestly probably worked in its favour. I’m not a huge fan of grape flavour in general, but I don’t mind it on occasion.

As expected, this totally tasted like grape pop when mixed with club soda. I was afraid of the stevia but luckily, when prepared this way (mixing cold brew with club soda) I didn’t detect much of it at all. That bite from the carbonation seems to neutralize that sweetness.

Drinking it straight as a cold brew, while obviously stevia’d up, it is rather interesting because the black currant notes appear and team up with the grape flavouring. It took me a while to figure out what that berry-like flavour even was. The two go very well together. I just wish they didn’t bother with the stevia. I would give it a higher rating, otherwise.

I don’t care for stevia either. :(

I’ve yet to find a person who does!

Yet when they try to sell me stevia infested blends in the store they stare into my eyes without a shred of guilt, like it’s all ok. :(

This was another sample from my last order. I found it to be marginal. I could kind of taste grape, and it was alright, I suppose, but I’m not going to be buying this one.

I had a free tea coupon so I used it up to try this one. I went to get a free sample in store but it was half hour before closing time and they did not have any left. Anyways, this tea is so delicious. Very light and refreshing-you can also taste the grape in it. I will be getting more of this one once payday comes around.