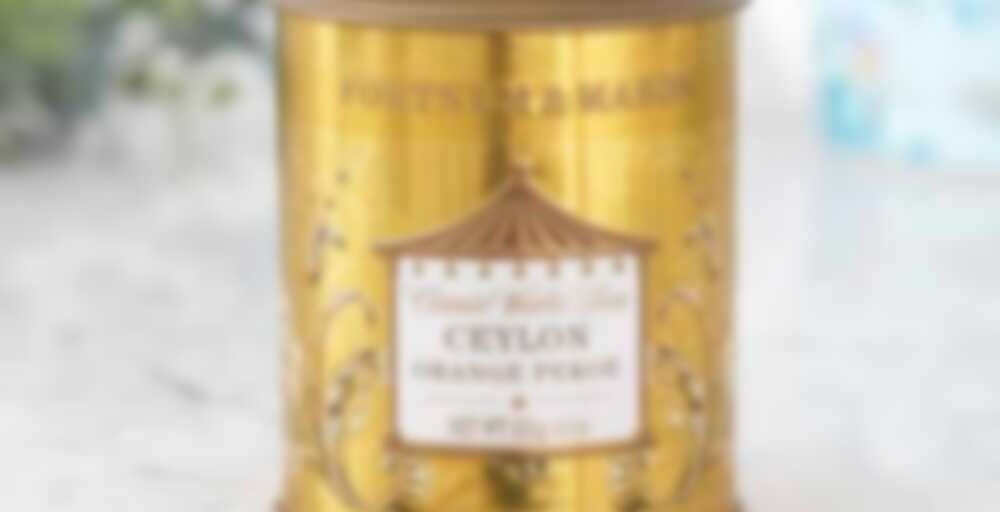 Orange Pekoe denotes a large-leaved tea, and the dark, even leaves of this tea are indicative of Ceylon. Just a touch of delicate high-grown tea is added to the more robust low-grown leaves to create a medium-strength brew – ideal for an afternoon pick-me-up.

Tasting Notes
Our Ceylon Orange Pekoe is a large-leaved tea, made from a combination of delicate high-grown tea and more robust low-grown leaves. Delicious when paired with fresh summer fruits like strawberries, or enjoyed as part of a continental breakfast.

Morning brew. Eying the new teas at Verdant, but I know that I’m going to splurge on teas while in London, so I’m not sure if it’s worth buying now or waiting a month or two…

When Ashman first started drinking tea, he liked Tetley British Blend with an obscene amount of sugar and some milk. He loved it, as well as other black teas, but decided he wanted to drink things he liked plain. That meant mostly greens and whites and oolongs. There are only a couple of black teas he likes plain.

This is one he took with milk and sugar but he adds a lot less sugar now. And he commented that this was especially good!

I like this one better than Afternoon Blend, which is also Ceylon. I get the feeling this has a ratio of low to high grown that suits me better. Classic crave-able black tea that goes well with meals and desserts. Coppery, resteeps well, and not a bother to sip down this little advent tin.

Surprise, surprise, another straight black tea. And I love black tea, but I feel like Fortnum is shooting itself in the foot a bit here by not mixing up the teas more. It just becomes boring to have slightly different shades of the same thing every day, when I know there are other types of tea and flavored teas in this advent as well.

Anyway. This is a mix of high and low-grown Ceylon. Ceylon doesn’t tend to be my favorite, but I’ve had a few that I’ve really liked. This isn’t one of those, but it’s still fairly tasty. It does have rather a lot of acidity to it, so not something I would want to drink on an empty stomach probably.

Otherwise it’s fairly smooth, woody, a touch bready, very slightly grassy or vegetal. It does have a lot of that Lipton-esque “tea” flavor that I don’t have another word to describe. A touch of briskness but nothing major, and some musty hay. I feel like I’m tasting just a teeny hint of some sort of aromatic herbal flavor like pine or eucalyptus, but having a hard time pinning it down. Fairly standard Ceylon taste to my tongue, though I’m probably not explaining it well… :D

On to the jam! Today it’s an interesting one, and I think it’s new this year? It’s Wild Blueberry-Balm Leaves Spread. I’m assuming they mean lemon balm…? But unsure. It’s tasty though, with a very sweet and rich blueberry flavor. There is a subtle herbaceous note that’s slightly minty, so could definitely be lemon balm. It adds a nice bit of interest to an otherwise very sweet jam! :)

That jam sounds like my jam. Ha ha. I really enjoy a true, genuine blueberry jams.

I have the jam advent, too, and I assumed since blueberry is so frequently paired with lemon that it must be lemon balm.

This jam advent is sounding very seductive. Maybe next year. Tea and jam. What could be better?

It’s Friday! Got a four day weekend coming up and I’m counting it down.

I steeped this one cautiously after drinking the Assam. I had a feeling this one would be very strong, too. Judging by how dark red it came out, I believe my short steep time was wise. It has an aroma that reminds me almost of a darjeeling. That sort of fresh, green hay scent.

The flavor is crisp and toasty, but features a less than desirable sort of vegetal note. Not really the clean black tea experience I was hoping for. Not too bitter, but it could get that way quickly if left to steep longer. There’s really not that much to say about this one. It’s a middle of the road black. Meh.

Had a cup of this for breakfast. Deep, dark flavor. I really enjoy this. It has this slight bitterness (not from oversteeping, just from the tea’s flavor) that is really enjoyable. Complex, strong, flavourful. I recommend this tea if you like strong black teas, that is.

Fortnum & Mason have very strong blends in my opinion, typicals from what I imagine an English tea base is…perfect to add a dash of milk. I drink all my teas without milk but I am not able to do so with some of the F&M ’s blends :(

Yeah, this tea really is quite strong. Doesn’t fit every palate, but definitely tasty on a palate it fits!