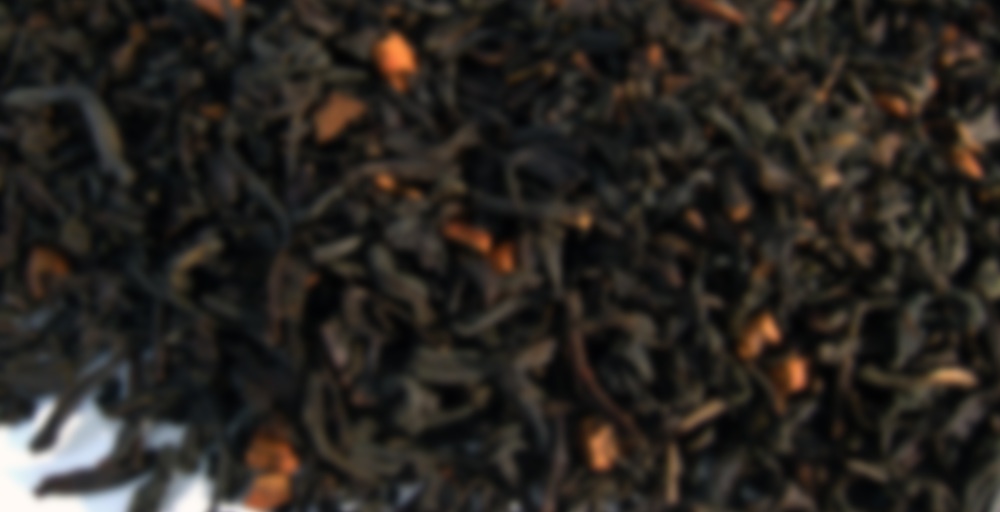 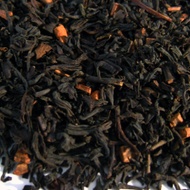 by Fusion Teas
78
You

An old time classic, which just must be part of any standard. The strong China Ceylon blend, enriched with crushed cinnamon pieces from Ceylon receives its perfectly balanced taste through our expressive buttery cinnamon flavor, Quite simple and perfect.

I’m taking a break and celebrating getting a large Christmas order completed today. The project was way more time consuming than I expected, so I’m glad that it’s finished. Plus, the customer should have it a full week early which will make her happy as well. Yay! This calls for tea!

The tea… I’m not getting cinnamon roll from this. There are no bread or frosting/glaze flavors, but it is a yummy cinnamon tea. The spice taste natural which is nice since so many cinnamon teas have that weird artificial flavor, and even thought there is a lot of cinnamon it isn’t completely overpowering. The Ceylon tea is distinct and delicious. It has a richer taste than I was expecting and is very smooth. Yeah, this is a keeper.

You work in retail, I assume? That’s good to hear that customers are thinking ahead too. Not like two days before Christmas and expect you to get an order together with the snap of a finger.

Cinnamon-flavoured teas can definitely be tricky.

I crochet custom pieces. Most of what I make I sell at a few specialty stores in Philly, but around Christmas I end up with more custom orders. This year all the cool moms and aunts want a cowl like Katniss wore in the movie Catching Fire for their daughters/nieces, so I’ve been busy coming up with a crocheted version (the one in the movie was knitted) that I think both the adults and the teens they are buying for will be pleased with. It’s been a lot of fun but a lot of work. My latest order was for three cowls, but the lady who ordered them wanted each one to be “unique”. Oy. I was really glad she didn’t order last minute. I don’t think I would have been able to do it. However, it all worked out, and I think her girls will be pleased.

Wow, that’s amazing! Crocheting looks so hard. And I can’t imagine how much time it would take to make one of those. Have you been crocheting a long time now?

I’ve been crocheting for 11 years now. I started because I wanted to make a blanket for my daughter, and it just went on from there. It’s really not as hard as it looks. I think it just has a steep learning curve, but once you’ve got it you can make anything. :) That said, I’ve tried over and over again to learn how to knit, and it remains a frustrating mystery to me!

They both look really hard to me haha. Plus I’m not creative with that kind of stuff. So I don’t think I could make anything regardless. It’s cool you’ve turned it into a business though. :)

See, and crocheting is a mystery to me, while I feel quite comfy with knitting these days. I got over my knitting weirdness (it did take me a while) by going to stitch ‘n bitches with some really great folks. The men were the ones that really helped me grow the most, interestingly. Now I want to start spinning, as I’ve already shorn sheep and carded wool… the whole process from start to finish would be fun!

As for your crocheting, I have to ask: how do you do it, well, faster? I find I can only go so fast, even after years of knitting now. Is there some sort of trick? Zoning out?

I would love to spin, too! And dye. That sounds like a lot of fun, and it’d be nice to say, “I want this yarn in this weight and this color,” and make it happen.

I think for me to knit I’d have to learn from someone who’s comfortable with continental knitting. I’ve been holding the yarn in my left hand to so long that switching just does not work for me. I’ve taken two knitting classes, but both were complete fails (on my part).

I guess my crocheting has naturally picked up speed over the years, but honestly I just focus on the work. I’ll put on music or an old baseball game (I love baseball), sit at my desk, and keep my eyes on my work. If I put on a movie or sit on my couch my time slows waaaay down. Also, I set a goal for myself each day and try to get it done before my first kid comes home from school. It keeps me motivated.

How long have you been knitting? And is shearing a sheep as difficult as it looks? I’d be so afraid of cutting the poor things skin! Not to mention holding them in place looks tough.

I’ve been knitting for about seven years now, although I’ve yet to conquer intarsia (colorwork). Another Steepsterite just generously sent me a 70s era Fisherman’s afghan book, and I’l super excited to try out something really challenging from it.

Shearing is both fun and challenging. I WWOOFed on a farm one summer, and they had sheep, chickens, goats, geese, cows, etc. I asked the lady if I could shear the sheep and keep the wool, and she looked at me like I was bonkers. “Sure, if you want to?” Was her reply. Needless to say, I found it much easier than expected… other than sheep are really dirty animals. This was much worse than cleaning a diaper. So I sent away the raw wool to get cleaned, and then carded it once it came back. I could have washed it? I was okay with missing that step. I would have spun it had I had more time to learn, and kinda still wish I had.

Like with catching chickens, there’s a trick to shearing sheep, and you just have to know how to hold them to do it. Much easier as a two-person job, but possible with just one depending on how big the sheep are. It’s just really, really gross.

That’s so interesting! I’m sure the smell is awful, but it’s pretty cool that you were able to shear and card wool. Maybe I’ll add those to my bucket list. …Maybe. :)

I just tried this tea and when I scrolled down the page I saw yours was the first review. When I read it, I could not help but laugh because I had the complete opposite reaction that you did as in I got bread and icing but little cinnamon. Gotta love steepster for bringing such diverse opinions :P

Lol. That is funny. I think next time I’m going to lower my temp just a little and play with my steeping times. I’d love to get some bread and icing flavors out of this tea.

This week has been kind of crazy for me. It started Sunday which I spent writing a paper that continued on throughout the night and took me until 8 pm Monday to finish. This was my first all-nighter of the week.

Tuesday, I slept in because I woke up early and felt so sick, I doubted anything would get finished. Luckily, I woke up at noon feeling fine and then proceeded to study until 6 am. The plan was to sleep in Wednesday but at 9 am I woke up and could not turn my brain off long enough to fall asleep.

Wednesday meant more studying and at 6 pm I started my last final. Three hours later, good or bad, the semester was over. I returned home to a meal prepared by my roommate and I hung out with her and her family (they are visiting for the holidays). Then at midnight, I started packing for Florida and cleaning my room so when I returned home, all would be nice and organized.

I arrived at the airport at 3 am (after some major issues due to unclear detour routes) and at 6 am I got on my flight. Unfortunately, the plane left an hour late and was so incredibly uncomfortable that I could not sleep a bit so I sat as the minutes slowly ticked on. The end result was getting to see my mom though so that is worth it.

Anyways, since arriving in Florida, I came home to the condo and dropped off my suitcase then went to a farmer’s market to buy produce and Publix to buy everything else. My mom and I brought the groceries back and then had to look up an address for Jenny Craig so I could go get my food. The Jenny Craig was close to The Spice and Tea Exchange so, of course, I had to drop in there. I left empty-handed, not really impressed by any of their teas but ended up in a store called “Sur la Table” because apparently despite leaving Montreal, I am still drawn to the French. There I picked up a Finum Brewing basket and a leaf tea infuser.

After getting home from running all our errands, I promptly started the kettle and put my infusers to work. I threw this tea from Veronica into the leaf infuser and Vanilla Orchid Oolong in the basket. Remembering that I felt this tea was a bit watered down in flavor, I dumped the whole 2 tsps I had left. Unfortunately, that has done very little to enhance the cinnamon for me. Instead it amplified the taste of the black tea which is emphasizing the bread-y notes and almost drowning out the cinnamon flavor. Consequently, I think this tea and I just are not a match and so now that it is gone it will most likely be forgotten. However, thank you Veronica for helping me mark this one off my shopping list.

I want to thank the whole team at Fusion Teas for this sample!

This tea has a very strong cinnamon flavor, of which I like very much. The taste is real cinnamon, not an artificial one. There is plenty of spice, even a little touch of cloves or pumpkin. Its very smooth, with not much bitterness detected.

This tea takes milk really well! In fact, I highly recommend adding a little milk, of which creates terrific Chai tasting beverage. It also, reminds me of a freshly made Dulce De Leche Cheesecake. Very yummy!

I just acquired two teas named Cinnamon Roll. This one and a free sample with my Della Terra order. I will try the other soon! This one is EXACLTY how I wanted it to taste… an unassuming black tea that doesn’t detract from the lovely sweet and spicy cinnamon (plenty of pieces of cinnamon in the blend!), while also having a flavor here that IS like a cinnamon roll. The only thing is, I would have wanted a black tea base that is very bready like… it can be done! Maybe I’ll mix some of this with a bready tea I have. If I did a blind taste test and had to name this one myself, I would have also called it Cinnamon Roll! When the cup cools, it has even more of that flavor. I’m so glad it tastes like I wanted it to! Not the best tea ever, but that it met my expectations, it gets a higher rating.