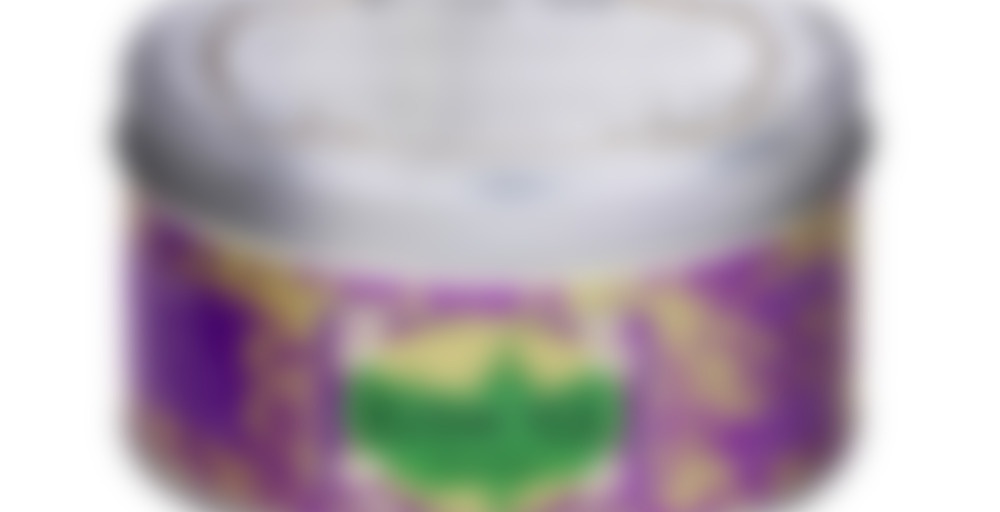 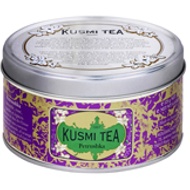 I picked up a big tin of this tea at the Kusmi shop in NYC before I left. Yes, I have officially moved away from New York, and all of its lovely tea shops. It’s definitely a bit sad but I am moving on.

I bought a whole large tin of this tea because it was not included in their Russian sampler collection but I very much wanted to try it, since it included almonds and rose as two main flavors. I do not have optimal brewing conditions here at my parents’ house, but I can tell I will definitely enjoy this tea a lot when brewed properly. I definitely get light almond and rose, with a bit of orange. A very pleasant blend.

I haven’t tried this one yet! It’s been a while since I’ve had any of the teas from Kusmi…sigh…SOON, I hope, fingers crossed!

How many tea shops are there in NYC?!
I’m thinking about the dozen or so in Toronto… I can only imagine what the big apple is like! SIGHS

I understand how you feel Dinosara as I am moving from Paris in one week.
Curiously we don’t have this tea available in France whereas Kusmi is a French brand

this was sent to me by the lovely dinosara and i’ve been hesitant about trying it. Mostly because i haven’t really liked most of the flavoured kusmi teas that i’ve tried. this one is actually pretty nice, though the flavouring isn’t super strong. Unlike my previous experiences with Kusmi, the base doesn’t ruin this cup. Thanks for sharing Dinosara!

Time shall unfold what plighted cunning hides:
Who cover faults, at last shame them derides.
King Lear, Act I scene 1

I chose not to look up this tea’s ingredients when I pulled this teabag out of the box. I didn’t even really smell the bag itself until after it steeped. The smell surprised me quite a bit. It reminded me of Bigelow’s Constant Comment only more subtly orange. Even as a bagged version (I’m still blown away by Kusmi’s bags) it’s still complex, but I have a feeling that its complexity is muted. I get the orange, the sweetness of vanilla, and hints of almond and spices. This one also moves to the forefront of “bagged teas I’d like to have on hand.”

I was a giant “Errr…” when it came to where in Shakespeare’s cannon this tea would fit. I was pleasantly surprised at how pleasant it was. It was an honest upfront sort of tea with a bit of what Morgana calls the “French Thing.” Aha! Honesty and even a little bit of French: Cordelia from King Lear! She’s honest, doesn’t play silly games, and eventually marries the King of France before being executed. Er, she sort of sets off the whole tragedy…

But this tea isn’t a tragedy! Hooray! So perhaps Cordelia isn’t the perfect embodiment of this tea, but it’s close enough. NE

I love how these bags are sewn, and this tea is a great pick me up. Kusmi makes THE best flavored tea. Period.

No argument there. Kusmi rocks my world.

Laine, you do know I’m working for the NYC Corporaate Headquarters starting next month?….. ;)

I can’t PM you because you aren’t following me…but…I was going to drop you a note…
:P

This wasn’t loose. It was bagged. But what a bag! It’s a very neat little bag, looks possibly hand-sewn. I haven’t yet seen another teabag like it. Not sure what the material is, but it’s not like those little silky bags everyone seems to be using nowadays. Whippersnappers. But I digress, as usual!

I…wouldn’t have known what this was, upon tasting. I mean, yes, I’d have known that it was black, but it wasn’t anything remarkable. I was a little disappointed, especially reading that description. It sounds like something that would have been right up my alley, you know? I didn’t get any of the spices, nor the orange peel. It was just…flat. Not bad, but not really remarkable either.

Still, it put Kate Bush’s “Babooshka” in my head. Which can’t be a bad thing. http://www.youtube.com/watch?v=SHwiMgkp8wg

LOL! I know what you mean about the bags: I have a few in my Shakespeare box and I was all like: holy shnikes — I don’t think that those are synthetic! They look like muslin or something.

I like this tea on occasion, especially since I like to serve it to my composer friends in honor of Stravinsky. The almond flavoring takes some getting used to, but it grows on one. I was sorry, therefore, to see that it has apparently been discontinued by Kusmi. This is not the first time I grew to like one of their teas and then had it withdrawn. They made many flavored teas with fruit essences, including my favorite “Figue.” The fig flavor was musty and just right, unlike lots of fruit-flavored black teas. I purchased this at a shop in Florence in 1999. I have tried repeatedly to find it again and even wrote to the company. They claim they never made it. But I have the tin with brown label to prove otherwise. Has anyone else ever tasted this?

Hello,
my pleasure to meet you,my name is Faith, how are you today,i saw your profile when i was browsing, i am interested in your profile and i want to make a good relationship with you,Here is My Email address ([email protected]) contact me on my email address
so that i can be able to tell you all about myself. thanks

I bought this tea on a whim at an estate sale because while I’ve been drinking Kusmi teas for ~5 (?) years, I hadn’t seen this one before and because it smelled amazing. I loved it, and was then on a mission to find it again, only to learn it’s been discontinued by Kusmi. I wrote Kusmi about this to confirm, and they said yes, but that they would be coming out with a seasonal tea that would be similar to Petrushka.

So, when black friday came around, and Kusmi offered a free mini tin of Tsarevna with any purchase, I presumed Tsarevna is the replacement. No, unfortunately not. I’ll just hope that Kusmi revives Petrushka at some point in the not-so-distant future.

Always puts a smile on my face. Sweet and mild with notes of almond and rose. Tastes like dessert if you add milk and sweetener.

This tea I really don’t quite understand. I find it to be very weak and too floral. The taste to me does not line up with the ingredients. I often have to add to it with lemon and honey or add green or black tea to give it a strong enough flavor.

This one surprised me, and I’m wondering if it’s what was written on the bag? (Received this in a swap from Dinosara). The reason why I wonder is only because one name was scribbled out, and this is much better than the average rating that I’m finding on here, from folks I know I have similar taste buds to. Also wondering if there’s some form of berry in here that I may be (mildly) allergic to…

Brewed up green initially (weird) then a light coppery brown once finished. Smells of caramel, tastes of it, with something berry-ish in the background. Whatever it is, I quite like it, other than the lip burning bit, so I’m sadly dumping the last third of the cup. Still really grateful to have tried it!

Hmmm, should be the right tea (I think I accidentally wrote the wrong name on the bag) but I am not totally sure. Weird!