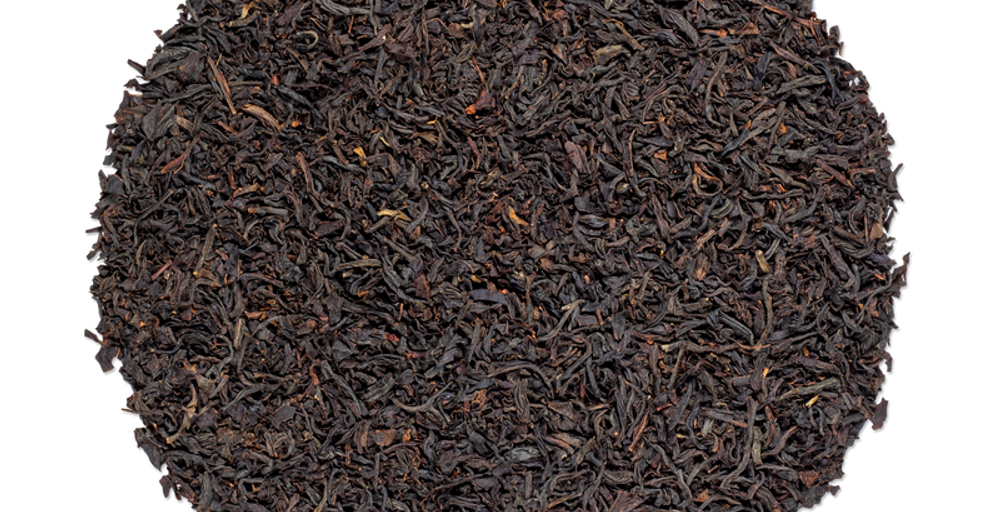 BLEND OF BLACK TEAS FROM ASIA.

Organic Russian Morning N°24 is a truly artistic product ! An intriguing blend of three premium black teas that go perfectly together. First up is Grand Yunnan, an organic black tea from China offering subtle notes. Next is an organic black Ceylon tea, full-bodied with hints of chocolate. Last but not least, we have the powerful flavors of an Assam black tea.

I was inspired to try this one again. In my previous attempts I’ve had some difficulty in getting the steeping parameters right. It doesn’t seem to be a very forgiving blend, and I have a strong suspicion that it’s the Darjeeling that I’m nearly certain it contains that is mocking me. Indian blacks can be so stubborn sometimes.

I think I’ve got it right now though. The aroma is very sweet, honey sweet, and there’s a subtle spicy note underneath. It’s still a very dark brew, but it doesn’t look like coffee this time.

Ah yes, the taste is much much better this time too! I think I said my original guess as to a rating would probably be around 75-80 points, but I think I’ll give it a little more than that. As horribly bitter as it can get when not done right, as lovely it will be when it is.

There is an Assam-y/Ceylon-y note and there is also the one that I think is Darjeeling, but it’s under control here. Instead of being overwhelming with the grass-y bitterness as in the two Fail pots, it’s lying under the surface, lending the blend a little freshness. Perky, even.

I’m not really sure where the Chinese blacks are in all this. I suspect they’re bullied out by the Indians and the Ceylon, cowering somewhere in a corner. There is a cocoa-y note somewhere in there, but it’s not very pronounced. It’s like a stealth note from the Chinese that doesn’t really come to its right.

It’s a nice blend if you can figure out how to brew it best, but given the amount of Fail it can be when not done right and how much experimenting I’ve had to do so far, I don’t think I’d ever really want to buy a larger quantity of it. Maybe a sample tin now and then, but that’s it, really. Give me a Chinese black any day. They’re less finicky.

Try their Grand Yunnan, if you want a black tea from China.

I’m not particularly interested in their plain unblended blacks, to be honest. I prefer chinese and I fulfill the majority of that need from Teaspring.

There’s only 1 unflavoured black tea from Kusmi Tea I love, and it is Russian Morning, also their Irish Blend is one of the worst unflavoured teas I have tasted…

I found the Samovar blend quite nice, but then again I have a bias towards smoky teas. :)

I love smoky teas :) Also their Smoky Earl Grey is quite tasty, because it got some freshness in the aftertaste…
Imperial Label is also very, very good, but it’s very underrated!! What a shame.

I’ve had the smoky earl grey once when visiting friends who lived in Paris at the time. I can’t remember much about it as I wasn’t paying that much attention to it at the time, but it’s the only EG that I’ve actually had any interest in actually purchasing. Haven’t done it yet, though. Found a shop where they have a large selection but the Smoky Earl Grey was only available as either the large 250g tin or some sort of loose weight fill-it-yourself bag with no way of knowing how many times the canister had been opened and how many hands, washed or unwashed, had been in it. For that sort of thing I tend to prefer the clerk measuring out, rather than help yourself. Mix your own sweets and fruit/veg that I’d rinse anyway are really my only exception to that.

No Darjeeling in the Russian Morning No. 24. It’s in the Irish Blend, which Kusmi states is Assam And Darjeeling.

Really? I remember it tasting very Darjeeling-y at the time, but they’re not super-informative about details in their description. ‘Tea from India’ is a pretty wide concept, really.
I haven’t tried the Irish Blend, I don’t think, but if it contains only Assam and Darj. I think I might steer clear of it. I’m not super-fond of Indian to be honest. I much prefer Chinese.

Tea of the morning; back to SF after spending 3 days in Portland. I tried to go to as many tea shops as I could but I certainly missed a few. The trip was very enjoyable aside from the rain.

This blend is a nice and mellow black tea. I think it’s one of my favorites from Kusmi along with the spicy chocolate.

Ooh! Did you buy any teas in Portland?

@Tealizzy – I did not buy anything! Amazing. @Sil – I missed Steven, he was on my agenda but it didn’t fit with other plans. Next time!

I had a small pot of this at lunch with my croque monsieur at a little French Cafe neaar work. This is a lovely breakfast blend. It starts out golden sweet like an assam and the flavor builds with the power of a non-bitter, fruity ceylon. There is a delicate natural citrus note in this as well This was a very relaxing lunch! I needed it as today is a madhouse at work!

I saw this neat discussion on Russian Tea and I thought I’d give it a go with some strawberry jam in my Kusmi Russian Morning No. 24. Here’s the link to the discussion.

I do so love the few Kusmi black teas I’ve had the opportunity to try. This black tea is nice and strong, perfect for a bold wake-up tea. Upon seeing this discussion I thought of the strawberry jam sitting in my fridge, just waiting to be used up.

I brewed up my tea normally, then added a dollop of jam and swirled it around. It’s actual quite nice! I didn’t know what to expect. The boldness of the black is ever so slightly diminished but not in a bad way, and the jam flavour lends a sweetness that’s different than adding sugar. I’m not one for overly sweet and the jam seems to be great here and not too sweet at all.

This is a fascinating way to have tea! I’ll have to keep it in mind for when I enjoy this tea next.

I’ve never heard of adding jam before! That sounds like a great way to drink a breakfast tea.

Totally buying some Saskatoon Berry jam to try that out.

Well, it’s the best one.

This tea will put some hair on your chest! I really like it. Russian Morning is lightly smoky but definitely full bodied. It would be a great intro into the world of Lapsang Souchong. Training wheels, if you will. This tea is smooth and slightly pine-y…not full blown campfire. The blend of black teas meshes nicely. The thing that surprises me the most about this tea is how clean it tastes and feels in my mouth. The smoke is there…some sweetness too, but clean, clean, clean. Quite tasty! TeaEqualsBliss sent me a sample of this back in the day. I’m glad I finally got up the courage to give it a go. Thanks chick!

How did I miss this one when surfing the Kusmi site? Sounds lovely!

I like your review. You said exactly what I think of this tea! It is actually one of my favorite Black tea blends, perhaps because it was one of the first I started regularly brewing in a pot. Love the “not full blown campfire”…precisely. I also agreed with another reviewer that said it can be difficult to get "just right’…I was able to do so pretty quickly just by trying first cup, second cup from put and noting how long I’d left it to steep, and using a scale to measure how much tea we put in and keeping notes. Anyway..thanks for the nice review of my fav.

Second cup: this was definitely being contaminated by the mint, so I’ve moved those out of the box now. I’m less overwhelmed by the flavor this time – not having that weird too-strong-but-not-bitter experience – but still not overly impressed. It’s nice with milk, but I’ve had many breakfast teas wow me more, so this won’t be making a home in the cupboard.

I drank the last of this as a cold brew. My initial notes on this tea are still ringing true to me, though I wouldn’t have identified a smoky note in the most recent cold brew, I don’t think. At least I’m not identifying it now.

It’s the sort of thing where I’d be happy to drink it, but I don’t need another tea like it. It’s solid but not distinctive enough to merit a permanent cupboard spot.

This was a sample that was included in the 12 Days of Christmas swap. This is another sample that I may not have labeled correctly in my packing rush, but I believe I owe a huge thanks to Isalia!

This was a great morning tea. It was full bodied, bold tea. I got an assam/ceylon flavor. I drank about half the cup straight and then decided to add a bit of honey and milk since I was home for the morning and had access to these. I am glad there is still a bit left. I will enjoy this one. Thank you!

‘Brews’ pretty quick! Love the color! Dark burgundy brown. Smells smoky but doesn’t lose it’s black tea scent. It’s a full bodied tea – that is for sure. Certainly a nice one for mornings!

My favorite aspects of this tea are its smoothness and its perfectly mild maltiness. I’m not getting smoke like a lot of y’all are. Also, I’m finding its flavor intensity more middle of the road, but maybe that’s because I enjoy stronger blacks. I agree with Joel’s take on the Assam predominance. Thanks to Crystal, for the sample.