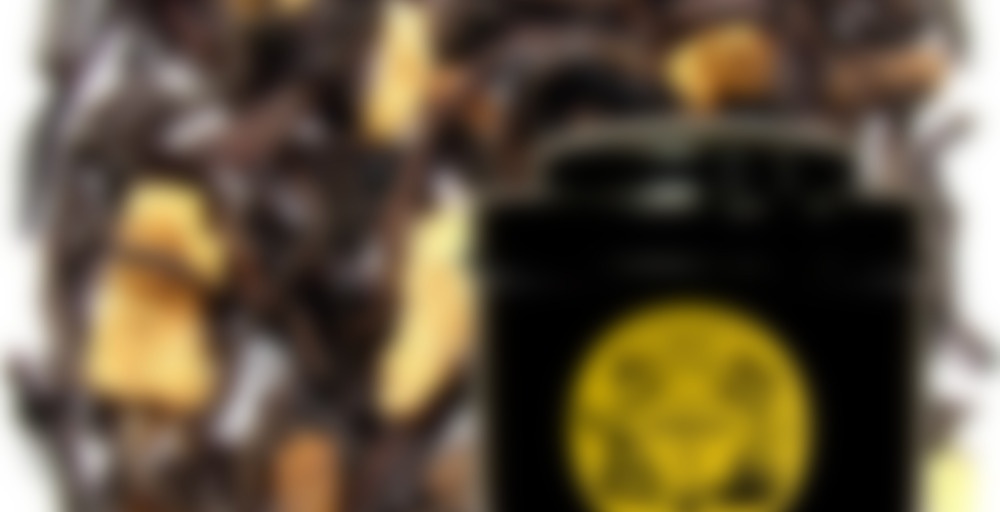 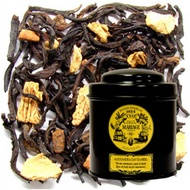 This blend is inspired by the famous Orientalist and Asian explorer Alexandra David-Neel, who was also a great tea-lover.
The black tea harkens back to China and the tea route; the broad range of spices (including pepper, clove, ginger, cinnamon and cardamom) recalls Neel’s personal quest for the distant Orient; and the fresh, floral note evokes the benefits and plenitude of meditation.

Out of the four teas from Mariage Frères gifted to me this was one of two chosen because the giver “thought the name was cool.” I am absolutely speechless before her rationale. What makes “Alexandra David-Néel” sound more appealing than teas with names like “Eros,” “Mandalay,” or “Pleine Lune”? I will never know. I’m happy to try a new tea and learn about an interesting historical figure, either way!

In summer the aroma reminded me of winter spices and mandarins but now that it is damp and wet the impression changes to dry desert and floral fruits. This tea does transport me places I’d rather be.

When I first opened my tin and caught a whiff of the aroma I thought “new chai! I need to add milk.” So, without even take a sip, I went straight for the milk and was dismayed at my spicy and fruity milk creation. This tea is actually tasty without the milk; the fruity, mellow, floral notes do not need it or do well with it anyways.

The flavours are complex. The first spices to hit me are the cloves and ginger. After I had my wisdom teeth removed I received a “clove” cleaner so it’s usually the first spice I detect. I will never forget you, cloves.

The ginger is a nice balance of sweetness and zing and leads me to noticing the next jumpy spice, cinnamon, which blends so well with the others I can barely single it out. The cardamom is spicy sweet and I think it may contribute to the last surprising bit of floral sweetness- reminiscent of something potentially citrusy and creamy. While this last note adds another dimension to the tea it tones the spice affect down a notch, and that’s ok.

Aftertaste is peppery and sweet. There’s a pleasant tang from the spices and a black leaf astringent streak but no bitterness that I can pick up! Floral endnote and cinnamon are more pronounced in second steep.

I am glad you wrote these tasting notes, I got this on my shopping list for one day.

And Mariage Fréres´s chai is Chandernagor – also with cloves and something which convinced me that cloves can be sublime.

I’ve come to adore cloves. I’ve lately been craving a powerful, well rounded chai and your note on Chandernagor makes it sound like the perfect choice.

I need to look into picking up some more teas from Mariage Fréres. My four gifts have gotten me hooked!

I am on a chai kick and Chandernagor so far is the one for me – and if you love cloves you really have to try it.

Mariage Freres knows their tea. Sadly, sort of, because they also know how to price their stuff just on the limit of how much I would ever consider paying. But almost always it is worth it indeed!

I wanted to buy this tea but it is only available in tin or bags (agreement with the foundation Alexandra David-Néel —-sounds weird for the memory of an adventurer not allowing loose leaf to honor her name —not sure she would have appreciated…)
Next time I’ll visit MF tea room, I’ll taste a cup of this tea.

First – my little envelope icon always says I have messages even when I don’t. It has been this way for over a year. I have literally gone through every single page of old messages at least twice to see if a reply posted way back and I missed it, but there is nothing new. Does anyone else have this issue?

Now, the tea! This was a surprise envelope from White Antlers! Thank you, thank you!

I made a cup one night and a big pot for breakfast yesterday to share with Ashman. (By the way, only his friends call him that. I usually call him sweetie. And that’s what he usually calls me. I would wonder what I had done if he called me by my name, probably! Ha ha!)

I am not a big chai drinker and would have made this as a latte except I saw a review that said it didn’t make a good latte. Drinking it, I could see why. This is actually pretty mild and smooth when drinking it by the cup. The spices are interesting and it doesn’t give me the stomach burn. I think milk and sugar would have detracted on this one.

When Ashman and I drank I had made a HUGE pot. Drinking cup after cup, the spices build until you start getting a little heat on the roof of your mouth. I thought it was clove at first, but now I think it was black pepper. I didn’t think he would like it, but he said that while it is not in his top ten, he didn’t mind it and would drink it again, but would not seek it out.

We googled Alexandra David-Néel and he read it as we drank the last of the tea. What a fascinating woman and a fascinating life! I had never heard of her until I received this tea, and we both really enjoy learning something new, so that was awesome!

I have to agree with Ashman. I liked it, especially when I had just a single cup and the spices stay tame. I normally dislike pepper in tea but this one wasn’t bad! It just isn’t one I woukd drink such copious amounts if at a time.

Thank you, White Antlers! For the tea and the history lesson!

ashmanra It was a pleasure to send you a little tea parcel! Very interesting to read your review, too. I got NO spice at all when I drank this tea, but then I have said over and over that tea just tastes like ‘tea’ to me so sometimes I wonder why I even bother. So glad it was well received in your home. : )

In the tin, the dry tea smells like gingerbread, down to a pastry-like quality. Yum.

The ginger is also prominent in the steeped tea’s aroma, as is the cinnamon and clove. Cardamom? It’s there, though for me, it’s around the edges. I was sort of hoping there’d be a citrus element. I wanted to see what a French blend with the Constant Comment flavor profile would be like. But no citrus that I can ascertain. The liquor is dark brown, almost coffee colored though it’s translucent rather than opaque.

Which reminds me, I dislike the fact Mariage Freres doesn’t list its blend ingredients. I am not sure why they don’t list them, but I thought it was an FDA requirement? I know they’re French, but I’d think if you’re selling into the US market, you’re still required to abide by those requirements. I don’t specialize in that sort of law, though, so I could be wrong.

If the reason they don’t list them is a sort of trade-secrety worry that others will copy their blends, I think that’s a little misguided. Knowing the ingredients doesn’t mean I can blend something myself that will taste like something I can buy. That takes skill that I simply don’t have. Even master blenders blending the same flavor profile have variations — none of them are exactly the same unless they’re the same tea with different branding.

This is a nice spice tea. It’s smooth, which is a relief. Some spice teas can be harsh. It’s pretty evenly blended so that no one flavor takes over. I don’t taste much pepper, which is surprising given that it’s listed first in the parenthetical of “including but not limited to” flavors. But it could be that my spoons didn’t pick up much this time. It does have a spicy aftertaste that gives a little burn to the tongue and that could be informed by the pepper. But that could also be the ginger. The pepper is strongest in the aftertaste.

I can understand why CrowKettle thought chai — there’s definitely an overlap in the flavors. But there’s something undefined about this that makes me not think chai, but more a mulled cider without the apple (thinking about what it might be like to put some apple in this?), a wintery, holiday-like flavor profile.

I find it amusing that I seem to want to add fruit to this — orange or apple — as though it’s missing something. But I really don’t think that. It’s very well blended and stands on its own.

Not sure where to rate it because it is a fine example of this flavor profile but I tend to drink this flavor profile sparingly. And I honestly don’t remember which teas in my tea notes are the most direct comparisons to this one (and am not feeling the need to research that point). So I feel a bit as though I’m stabbing in the dark with the rating.

Kusmi’s Prince Vladimir reminds me of Constant Comment a bit!

That’s funny — I mentioned that in my note about Prince Vladimir, too! I have had so many teas I can’t keep them all straight. Sigh. But this makes me want to have PV again. I suspect I would rate it higher now than I did then.

I adore Prince Vladimir! He is especially tasty this time of year, I think.

I try to tell myself that I really don’t need a tin of each of Kusmi’s Russian blends. I’m always wrong… XD

And the caramel, and the red fruits, too!

P.S. – I now have brand new shiny tins of Prince Vladimir and Anastasia. And it’s all your fault! ;)