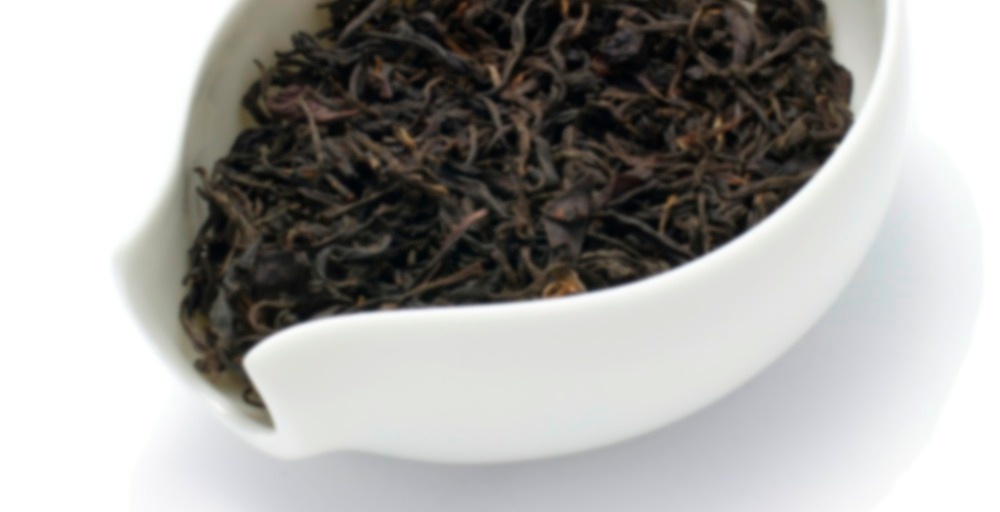 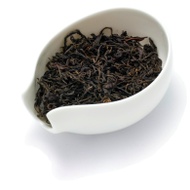 This is a sample , part of generous package sent to me for review.
Non Smoky Lapsang Sauchong.
i used my usual parameters. Entire sample of 6g
6g 100ml porcelain gaiwan 200F
rinse/pause/ 5/3/5/7/10sec etc
This tea is rich and sweet like dark chocolate. No astringency or bitterness. Sweet and smooth and pleasure to drink. Some may add drop or two of maple syrup (I have to always mention Sil and Terri since its not my idea). it rounds up all the flavors.

Thank you so much NanNuoShan tea for your wonderful samples

I would love this. Happy that you are enjoying it. :)

i need to try this one… sounds yummy!

Thank you Dexter. Im having a lot of fun sampling. But then i have to write reviews….

This tea was sourced from the originating village for this type of tea and is the traditional large leaf variety. This tea was pine wood smoked which is a practice becoming more and more regulated in China due to environmental reasons. This tea was smoked. It was from the 2013 harvest so part of the smoke essence has dissipated but the footprint that is left on this tea suggests that it was expertly done as the smoke itself becomes an insence like aspect of the flavour which enhances and does not overpower the other flavours in the tea.

The leaves are quite large and loosely twisted. The leaf is a dull light grey brown to a charcoal black with hints of gold tips.
http://instagram.com/p/zV2xAtGK4p/

In scent texture and flavour it is most similar to a tea I have from a Wuyi producer from Aliexpress. It is neither as sweet, fruity or chocolatey as some teas I have had of this type, but all of these are present as well as a floral note and a insence like note that lends a bit of a savoury note to the tea.

The dry leaf smells of a mix of tart fruit, malt and grain, raisins and a bit of smoke.

Once steeped the tea smelled of cocoa, caramel, hints of smoke and ash, a spice note that was partially cinnamon and partially a note of dressed leather, hints of longan and a fruit note that was chocolate mixed with blackcurrant.

The tea retained a nice level of roasted light smoke notes in the flavour that contributed to a spice note like that of a chipotle sauce that mixed well with cocoa and caramel notes. There is a floral note that mixes with the caramel that intensifies as it cools. Also present is a bitter note that is a bit vegetal and a bit malty.

Later steeps exhibited a bit more of the tart fruit notes found in the dry leaf with stone fruit, longan and currants appearing. The caramel fruit and floral notes switch prominence as the tea cools. The tea has just enough astringency to come off as refreshing when steeped at 90°C. Towards the end the tea became more grainy with a bit of cream. The tea had a nice body but was not as creamy or oolong as some teas of this type have been for me.

My favourite steep was probably the third steep as the scent of the brewed tea was very beautiful and the caramel and floral notes were perfectly balanced and were countered by the smoke and cocoa.

Thanks Nannuoshan for the sample!

Thanks again for the samples, Nannuoshan! This one is also known as Lapsang Souchong, but don’t turn away from this tasting note, those of you who don’t like smoky teas! The smoke here is very faint. The leaves here are a dusty black and some of the longest and twistiest leaves I’ve seen. They should be mildly smoky, but I don’t get any hint of that in the dry leaf or steeped leaf. There is only the mildest hint of smoke in the flavor. The steeped leaves result in a mahogany color, while the brew looks like a dark cup of coffee. The taste doesn’t resemble coffee at all – it’s surprisingly sweet, smooth, not at all astringent. It has a mouth-watering, thirst quenching quality that I don’t usually find in teas, if that makes sense. I can’t really describe it… it’s just very satisfying. Otherwise the flavor hints at chocolate, caramel, but is mostly dried grass (much tastier than I’m making it seem). Maybe not as deeper or as much of a punch of full flavors as I expected. Very nice though! The second steep has almost the exact same flavor as the first steep, though the brew isn’t as dark as the first cup.
Steep #1 // 3 grams for 12 oz mug 2/3 full // 12 minutes after boiling (should be at 194 degrees) // 3 minute steep
Steep #2 // 7 min after boiling // 4 minute steep
Nannuoshan.org

A quick five second rinse releases the aroma of smoke, stone fruit, and honey into the air. The liquid is a lovely gold, medium bodied and slightly viscous. Wow, is this really a smoked tea? It tastes of sweet honey, stone fruit, and light mineral. It’s dries the tongue just a bit. Faint notes of muscatel are present. The only evidence of a smoke flavor is the taste that lingers behind after swallowing. It’s perhaps more pine wood than smoke, but it’s there. It becomes more obvious as I sip through my cup. In the second cup I notice subtle notes of cocoa with a light caramel/cream finish and a touch of roastiness. The body, again, is light-medium and less viscous than the first cup. The third cup has a stronger caramel flavor, but overall it’s much lighter and starting to weaken. I don’t think it’s a tea I’ll be buying, but it was certainly a lovely one to try. Thanks nannuoshan!

this was another free sample from nanuoshan. This is very similar to other tea of the same variety that i’ve had before. brewing this gonfu, at gabriel’s request. I don’t love this one as much as others that i’ve tried, but it’s not a bad tea. I’ll have to try this one again before i reserve judgement. Gonfu, i’m not a huge fan. Western, i might be more amenable to this one. either way, i genuinely appreciate the sample from nannuoshan.

Here we go again with the infrequent updates. Oh well. If/When I ever get to a period of trying lots of new stuff often, I’ll totally be building another queue.

Anyway, I got this sample with my recent Nannoushan order. I chose it because I don’t think I’ve had this type before, but now that I’ve tasted it, I’m not certain. Now I think perhaps I have but with a different name? There’s just something about it that strikes me as really familiar and I can’t really put my finger on what it could be. I know that loads of Chinese blacks have more than a few characteristics in common and it doesn’t normally make me feel like I must have had it before. This one did though. I got a very distinct feeling of familiarity. Does anybody know of any alternative names? Anglified, maybe?

It’s a very sweet tea. Both in the aroma and the flavour. The aroma has a subtle chocolate-y note to it, but the flavour is very caramel-y. Remember that roasted in muscovado tea that I bought from Yunnan Sourcing? I can’t remember the name of that one right now, but this is how I was hoping that would taste.

This one isn’t particularly grain-y, but it is somewhat wood-y and it’s a quite mild tea. So much so in fact that it probably wasn’t super-suitable for the first cup of the day (YAAAAAAAAAAWN!) but a very pleasant cup even so.

I understand, from questions asked and answered on the discussion board, that this type is sometimes smoked as well. Mine isn’t smoked, but I should like to try a smoked one too some time. I have once had an unsmoked Lapsang Souchong. I wonder if this is what is causing my feeling of having had it before?

Dear Angrboda, the lapsang souchong is most probably what makes you think having drunk it before.
Zheng Shan Xiao Zhong has no other name in China, but low quality ZSXZ are called Lapsang Souchong in the Western world.
If you would like to try a smoked ZSXZ, I could order some and send you a sample. I’ll be in China in the beginning of January and can take it back with me. Just let me know.
It won’t be a Lapsang Souchong. I aim at a fine smoked ZSXZ, in which the smokiness does not overwhelm the taste of the tea; rather harmonizes with it.