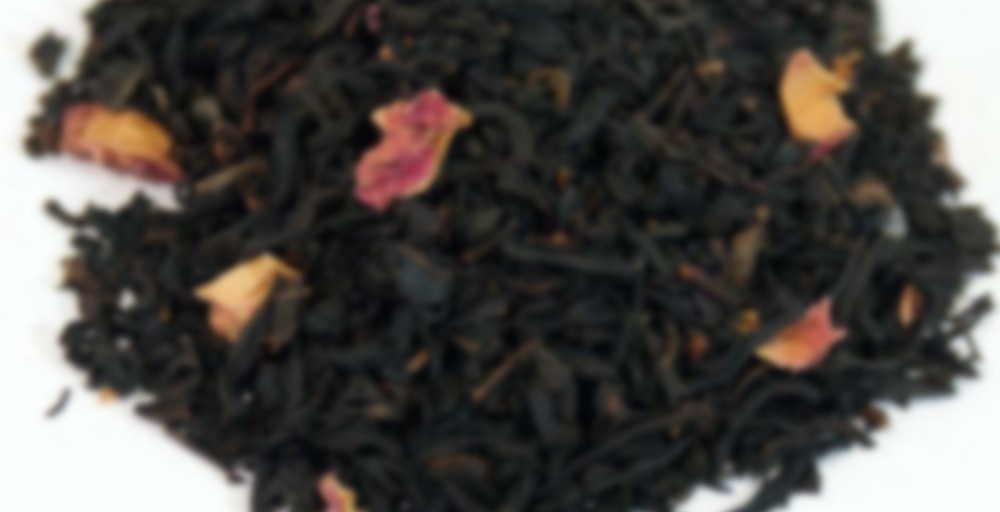 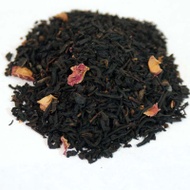 Our violet tea was so popular that we decided to take the floral sensation one step further. We added our delicate, fragrant violet flavor to black Rose Congou to create a deep amber cup with an incomparable bouquet and a flavor that is absolutely heavenly.

This has got to be the most potent tea I have ever had in my cupboard. Even just touching the bags its in, my hands smell like violets. This tea comes to me thanks to PositiviTEA.

From a distance this smells mainly like violet. STRONG violet. But when I sniff the tea up close, a clear rose congou aroma comes out and battles the violet for supremacy. Holy wow, this is a floral tea. I mean, I love florals and this is possibly a bit much for me. It’s actually calming down a bit as it cools, and while the rose is definitely there, the major flavor is VIOLET. I’m not sure that I love violet that much; I bought some violet candies once thinking that I would love them just as much as I love my rose candies, but I could never really get into them. I think this tea is the same way. That being said, I am still enjoying this tea a fair amount, as the base tea is smooth and nice, and the whole thing has even a light sweetness about it that complements it well. Happy to have finally tried a mostly violet tea, though, because I have been curious for a while.

Boiling 3 min, 0 sec
Yours I Like This
7 likes
1 comments
Edit

Ending my tasting notes for the day with this — apparently the last Simpson & Vail in my cupboard that had been noteless until now.

I had some of this yesterday, but was rushing around and didn’t get a chance to really think about it much less write about it. To the extent I thought about it, I thought annoying thoughts.

First, I am fairly sure that this is the tea that single-handedly overpowered all the other teas in my Simpson & Vail order and made them all smell pretty much the same to me in the dry leaf.

Second, this tea should never be made in a tea maker. It was impossible to get the smell/flavor out of the Breville simply by rinsing. I basically had to wear it out by steeping other things for a couple or three steeps. All of which had a hint of this in them. Shudder.

This tea is the planet eater. It brings every other tea in its orbit into its smell and flavor.

I recommend an isolationist policy with this tea. Keep it somewhere far away from everything else. Don’t make it in anything you can’t put through the dishwasher to completely banish all traces before making another tea in those implements.

The fact that this tea is such a pain in the ass made me biased against it from the start. Normally, I quite like rose teas. And I’ve enjoyed violet ones as well.

If done well, I’d think the combination could be quite marvelous. But to be marvelous, I’d think at least three things would need to be true:

1. The rose would not overpower the violet or the tea. The violet would not overpower the rose or the tea.
2. Neither the rose nor the violet would be soapy or lotiony.
3. The tea base would have to have enough character on its own to stand up to two strong florals, and to integrate both of them in such a way that they aren’t warring with each other or the base, and don’t taste like they were painted on top of the base as opposed to working with it to bring out the best qualities in all the flavors.

As you may have guessed, the smell in the tin did not achieve any of these three things. But I’ve been drinking tea long enough to know that dry leaf aromas can be a harbinger of what a steeped tea will be like, but can also be completely different after hot water enters the picture.

In this case, hot water alleviated my concern with item 2. The tea no longer smelled like it might taste like bath products. It was orange-brown, a sort of standard tea color, and slightly hazy. But the jury was out with regard to 1 and 3.

Tasting brought back a bit of an issue with no. 2 — there is a sort of soapy quality to this. It’s not as bad as some, but still there. No. 1, however, gets a passing grade. I taste equal parts rose and violet, neither overpowering the other.

The real issue for me is no. 3. Part of the reason I get the soapiness is, I think, that the base isn’t the best for this type of tea. There’s a distinct quality of the flavor sitting on top of the tea, as though the tea is just a delivery vehicle and not expected to be a contributor to the flavors. The tea does have a flavor, but it isn’t particularly well integrated with the other flavors. I think of some of the French blends, or the Samovar or ATR blends that accomplish this particularly well, and this is just OK by comparison.

So I don’t hate it, despite my annoyance with it. But it’s far from a love affair, either.

Giving this the same rating I gave S&V’s violet tea because, well…it tastes the same. The violet overpowers the rose completely, and if there weren’t big pink rose petals in the dry mix, I’d think I was just drinking violet tea. I like violet, but I was hoping for something a little different, you know?

That said, it is visually a very pretty tea with all those rose petals. They just can’t compete with the strong violet flavor.

I didnt want anything overly nice this morning. Do you ever have those mornings, when really, its just an unexceptional cup of tea that you want? They’re rare, but its a good time to drink something you are only meh on.
I will say that this is better than a lot of the teas that I got from S&V, but I still find it underwhelming.
Well, it was an interesting tea experiement, I suppose.

Yours I Like This
14 likes
5 comments
Edit
keychange
Delete

I have absolutely 100% had mornings when I just want a cup of meh tea. It’s funny how that happens.

Ditto, I also have a meh tea tin section on my cabinet that I need to go to every now and then. Tea that requires no fuss, that doesn’t require any effort on my part and offers no surprises!

Yep, I totally have meh tea days. I don’t know why, but it’s true.

No-brainer, no-fuss teas are essential at my house.

Whew! I am glad to hear I am not alone.