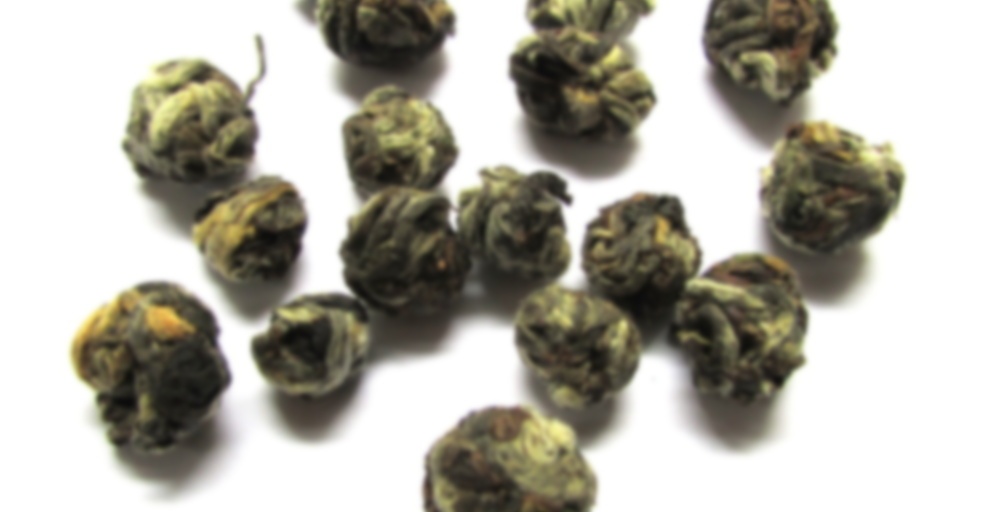 An incredibly rare and unusual oolong with an unbelievably great taste. Incredibly smooth, absolutely no detectable bitterness or astringency with a divine taste of apricots and nectarine. Simply not to be missed.

Only 6kgs were produced this year and we are delighted to have been able to secure 2kgs for our customers. Supplies are extremely limited due to it being completely made by hand! Rarity is compounded by the extreme difficult of producing a pearl, with size ranging from a large jasmine pearl to the size of a Yunnan black dragon pearl (marble sized).

Tasting Notes:
- Very smooth texture
- Incredible nose
- No astringency or bitterness
- Brilliant taste of apricot and nectarine
Origin: Greenland Organic Farm, East Nepal
Brewing Advice:
- Heat water to roughly 80°C/176°F
- Use 4-6 pearls per cup/small teapot
- Brew for 3-4 minutes
- Always remove the leaves from the water once the tea has brewed
- Re-use the leaves multiple times and increase steeping time with each subsequent infusion
- Best without milk
We always recommend experimenting with any new tea, to find the parameters which suit you best.

From the LiquidProust group buy.
The pearls are quite large, so I was surprised to read on the package instructions to use 3-5 pearls. Nevertheless, I used the average of 4 pearls, so the steeped tea was quite strong and lasted a lot of steeps. Very nice taste, no astringency and quite sweet.

I enjoyed this. It was veggie and a bit sweet and earthy but not overly strong. It steeped well for me four times, which I appreciate.

This tea comes in balls of roughly 2 grams. I used 2, with multiple steeps of roughly 1 minute each. The first steep was pretty much wasted, since the balls stayed solid and the tea was very weak. The balls didn’t fully break up until the 3rd steep, though the second steep was reasonably strong. Still reasonably flavorful in the 4th steep (2 minutes).

The taste is earthy, with some vegetation flavors. Not what I think of when I drink an oolong. Nothing really wrong with the tea, but it didn’t excite me.

Didn’t know where to start with the What-Cha group buy (via the great Liquid Proust) box so I reached in, eyes closed, and this one came out.

The packaging recommends 176F so I brought my kettle to a boil and let it cool for around 3 minutes (really need to consider getting a temperature controlled kettle!). I put 3 of the pearls in my gaiwan and stepped for 3 minutes. It was a little astringent for me, it was tasty but I got distracted and didn’t pay attention to the exact flavor, other than fruit. That’s a good enough reason for a 2nd steep! It’s very light. It reminds me of a white tea. I can’t really place the fruit flavor but I have never had an apricot that I can remember.

Sounds good! It’s still definitely not as exact as a temperature controlled kettle, but I sometimes add a Tablespoon or two of cold water to bring the temperature down. That way you don’t have to wait and risk forgetting about it like I do.

I was expecting these pearls to be tiny like jasmine pearls. When I read on the pkg to use 3-5 pearls per cup I was a bit surprised. Then I opened the package and saw how big each pearl was. I am already on my second cup of this tea today. It doesn’t taste like any oolong I’ve had before. It reminds me a bit of Moonlight tea and some whites. I just love it. It brews up a medium amber colour. It’s fruity and light with a bit of apricot. Looks like I will be having this tea a good part of the day.

So glad I got in on the What-Cha group buy. I never bought from them before but you never know what-cha are missing until you try it. Thanks to Liquid Proust and to What-cha for organizing it.

3 pearls in 8 ounces and this is a potent one. I got seven steeps, and only the last two exceeded 2 minutes and 45 seconds at 4 and 5 minutes. It was fairly consistent too- something similar to a full bodied white tea with strong hints of citrus and tangerine like described. And the tea only got sweeter as time passed by. I’m impressed by the strength and longevity more than anything else as the leaves gradually opened. I have a feeling it might grow on me later on.

Snow and ice. My youngest left at 5:30 this morning for work. 10 minutes later he pulled back in the drive. I asked him what was going on. His reply, “It’s just McDonalds. It’s not work the risk.” I’d like to say I taught him well but truth is I was never that smart.

I can’t post on my blog until the new billing cycle. I can write on it just fine but pictures can’t be uploaded while I am throttled for going over my data limit. le sigh.

So you guys get first crack at my take on this oolong. A Nepal oolong is unusual enough. This one is rolled into pearls. Not sure what effect monsoon flush has on the taste but thanks to the pickers who got wet so I could try it. The brewed aroma is strongly apricot and nectarine. The taste is much less so, but is stone fruit. Starts mellow and smooth of fruit. Then turns sweet and mineral. Next it develops a peppery spiciness (not too strong – just enough to be interesting), along with hints of mushroom. It trails off into a sweet aftertaste. I notice hints of cucumber making my connection to this more white tea like than oolong.

If you aren’t normally an oolong fan because they tend to be either a cup of geranium or too heavily roasted, then you might just find this appealing. It is very much not your typical oolong.

A very light and fruity oolong. I’m almost reminded of a white tea. No bitterness or astringency, just lots of light apricot notes.

I steeped 6 pearls grandpa style. Quite tasty, but I think this needs another try.

I’ve been hearing the term “grandpa style” a lot lately hahah I’m just know figuring out what it is. :)

My morning cup! The doctor put me on a strong course of prednisone in preparation for my surgery on Thursday. I still can’t smell, but the nose has opened up a bit and my head feels 10 pounds lighter. I wanted one more cup before sending the remainder to another Steepsterian. 4 pearls in 8 ounces of hot, not boiling, water for 3 and a half minutes. Delicious. I can sort of taste something. It gives me excited hope that a month from now I’ll be able to really taste tea!

I left the windows open last night, so it’s cold in my apartment this morning. It’s supposed to be quite hot later, so I don’t want to close them yet. I’ve got a shawl around my shoulders and a hot cup in my hand. So coazy! I love mornings like this. I also had a few squares of dark chocolate with bits of pear and almonds in it to enjoy iwth my tea. If only I had today off this would be the perfect day!

Oh no, I hope everything will go well up to and including the surgery.

Thanks, Fjellrev! Surgery is Thursday, and it’s an outpatient procedure, so I’ll be sleeping in my own bed on Thursday night, and I should be back to work within 10 days. And hopefully breathing through two open nostrils within the month!

I’ve been looking forward to trying What-Cha’s Nepal Monsoon Flush 2014 Pearl Oolong Tea since it was added to the site. The dry leaves are rather large even compared to the already large Nepal 2nd Flush 2014 Cannon Ball Green Tea and the smaller Nepal 2nd Flush 2014 Dew Drops Green Tea. Like the Dew Drops and Cannon Ball, this tea has a rather strange shape and is wonderful to watch as it slowly opens up. I am not sure if I would describe this tea as Lovecraftian, but if Cthulhu drank tea I wouldn’t have trouble imagining him drinking this particular one. As this tea opens up it transform from large tea pearl to embryo-like monstrosity insect emerging from a cocoon.

I began with a short ten second rinse with boiling water, then for my first infusion I brewed at 176°F for thirty seconds. Their was a peppery aroma and hints of a very dry wine. It had a very light apricot taste, that seems to be common in many teas from Nepal, as well as cherries.

For the second infusion I brewed at 185°F for forty five seconds. The aroma changed slightly this time, while pepper and sweet dry wine was still there, the wine scent became more prominent and the pepper scent became murky. This time I tasted a strong muscatel, and sweeter apricot.

In subsequent infusions I added five degrees and ten seconds each time, while the liquor became considerably darker around the five infusion, the aroma disappeared in the third. This tea kept getting sweeter and sweeter as I went on. Because I was so fond of this tea, I almost immediately (okay three hours later) brewed it again. I brewed it at 176°F for four minutes and was meet with slightly different results.

This time the liquor was a beautiful dirty golden color. While it still had an apricot taste, it was riper and generally more enjoyable. It also had a slight tart cherry undertone and a completely new hay taste. The aroma was a little hard to recognized, there was a little murky white wine smell to it, as well as a something similar to wet stone.

I rather enjoyed this tea, I think I prefer longer steeps on this tea while not as complex as either the Cannon Ball or Dew Drops it certainly warrants trying. I still have a large amount of What-cha teas to look at.