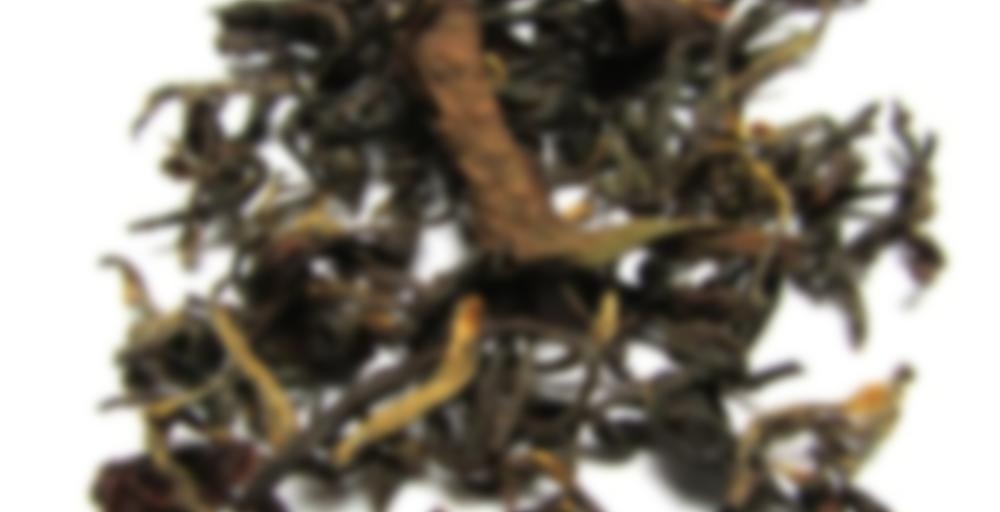 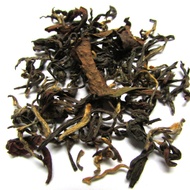 Gopaldhara Red Thunder Gold is a truly special and unique tea from Darjeeling which posses a brilliant sweet taste with floral tones much like those found in a red wine.

The tea’s unique taste is as a result of the leaves being subject to freezing temperatures due to its high elevation growth combined with late season picking, the frost causes leaves to wilt and fermentation begins at a slow rate while the leaves are still attached to the plant.

This unique tea is produced in very limited quantities each year and we are proud to offer the even rarer Red Thunder ‘Gold’ which possesses a higher golden tip content which imbues a sweeter and smoother taste.

Sourcing
The tea has been sourced direct from Gopaldhara tea estate in Darjeeling, located in Mirik Valley and one of the highest tea estates in Darjeeling at an elevation of 1,700m to 2,100m with gardens totalling 320 hectares.

One of my most favourite back teas, and my absolute favourite Darjeeling! I have not tried many autumn Darjeelings, but this one is great.
Very interesting and unique full body notes and a sweet taste. Reminded me a bit of a Japanese black tea I tasted at a Japanese tea factory.

I usually get quite a few brews from this.

derk sent me a generous sample of this a while back, and I think it was the first tea I pulled from the box to try. Today we did something new…since we couldn’t go to church for Easter or visit anyone, I made a little brunch of waffles with strawberries and whipped cream and we had a gong fu tray outside. The forecast said rain wouldn’t start until 2pm, so I was pretty surprised to get out there and see lots of clouds. It held off long enough for a nice long session.

My husband ran an extension cord through the garden to the backyard where we were having tea on a blanket so I could keep the water hot enough. Had it been a green, I would have just used a tetsubin on a warmer.

This steeps up dark for a darjeeling, at least compared to the ones I have had. It is much more similar to black tea to me, and is smooth and lacking the bite that I always have to tame with just the right parameters for darjeeling. This is much more forgiving and boy did it ever last! Steep after steep.

When it started getting paler, I just steeped much longer, and it kept going and didn’t get bitter.

Even my husband liked it, and he is not a big fan of black tea without milk and sugar, though he has decided to eschew additives and is getting himself accustomed to plain black tea.

I must say it went well with the strawberries, as the fruitiness of the tea wasn’t biting and sharp like some darjeeling is to me, which would have been too much in my opinion.

Happy Easter to all!

Another one of the samples I received from derk :)

Initially, the dry leaves have a light fruity aroma. When wet, the smell actually reminds me of some Yunnan black teas – there is definitely a strong malt note there, as well as some cocoa/chocolate. However, it is more complex with extra layers of rose and roasted like aromas.

The taste is quite herbaceous and somewhat earthy, but the finish is more on the fruity & tangy side. I also still get the malt and rose notes. The aftertaste, apart from being slightly drying and fruity, also displays noticable medicinal, spicy and nutty aspects. Overall, it is a very complex and tannic tea that I have no chance of getting to know by one session alone. I will definitely try to get more though.

Loved the 2017 harvest, so some time ago I bought a 50g bag of the 2018. It took me a while to open it, but once I did, it was gone in a flash. I western steeped pretty much all of the bag besides the last 5g today, which I prepared gongfu just to see how the tea would respond, which was surprisingly well!

Comparing the 2017 harvest to 2018, most of the notes found before were still there in complexity . This time around it seemed autumn leaf, wood, malt and tangy citrus dominant with a bit more (enjoyable) bitterness and a heftier tannic bite. I didn’t pick up on cocoa nor muscatel with this harvest but I did notice maybe some burnt sugar as well as persimmon, like in those highly oxidized Taiwanese red oolong. Dynamic mid- and background notes that seemed to be in constant flux on my tongue.

My black teas are getting dangerously low again; I hope the 2019 harvest is around when I get the itch to fill my black tea fix from What-Cha.

What-Cha has 20% off Darjeelings now btw

Thanks! I’m going to be wiser with my money this time since my disposable income is low at the moment. Cat Cave black tea is 30% off and more budget friendly.

I’m back! And I owe Alistair a handful of reviews…

I started with the popular favorite for something interesting in this log, or interesting for the fewer words I’m going to use for future logs and time management.

So this sample from “the champagne of teas” was exceptional and fairly wine like. All the good descriptors have been used like autumn leaf pile, fig, dates, red wine, so on and so forth. I only did it western and grandpa, though I easily seeing it being like a Bai Hao or Oriental Beauty with a savory edge. It can be drying and tannic like a red wine, but it was more akin to a Zin or a sweeter Cab. This tea was distinctively herbal and floral like any other Darjeeling, but the sweet date and fig notes distinguish it along with its buttery viscosity.

I am very tempted to get more of it-even my brother plowed a cup straight despite his more Western cream and sugared palette. If only I didn’t have my sights set on other specific leaves, I might have a small stash of it. I recommend this to Darjeeling snobs and to those looking for a lighter version of a more muscatel tea, maybe Dianhong lovers who want to change it up a bit. It might convert some to Darjeeling, but otherwise, it is a savory black tea to those who search for it.

I LOVE this Darjeeling – One of my all time favorites! I was just thinking that it’s time for me to order some more.

I reviewed an earlier harvest of this tea back around the end of 2016. I think that version was either a 2015 or 2016 production. I greatly enjoyed it then, but at the time, I was not used to autumn flush Darjeeling black teas and had not reached a point where I was fully comfortable identifying subtle aroma and flavor components. Fast forward to the spring of 2018 and I ended up with a free sample pouch of the 2017 version of this tea with a What-Cha order. I then set aside some time at the end of July to try it. I found this more recent production to be more complex and challenging than the earlier version, but of course, I think a lot of that was probably due to me simply being more used to Gopaldhara teas and autumn flush Darjeeling black teas in general.

I prepared this tea in the Western fashion. I steeped 3 grams of loose leaf material in approximately 8 ounces of 203 F water for 5 minutes. I neither rinsed the tea nor attempted any additional infusions.

Prior to infusion, the dry leaf material produced subtle aromas of raisin and prune that were underscored by ghostly hints of cocoa. After infusion, I noted new aromas of roasted almond, butter, malt, toast, rose, and Muscatel. In the mouth, the tea liquor presented notes of herbs, straw, malt, butter, cream, toast, lemon zest, Muscatel, orange, rose, dandelion, black cherry, and wood that were balanced by subtler impressions of cocoa, prune, grass, and raisin. The finish was very pleasant, offering lingering impressions of orange, black cherry, Muscatel, dandelion, rose, and toast that were chased by fleeting herbal notes.

Overall, I found this 2017 production to be just as enjoyable as the earlier version of this tea. It was fruitier and more complex, but again, I likely feel that way because I have gotten much better at picking out aromas and flavors over the course of the past two years. Much like the other teas I have tried from the Gopaldhara Estate, this one had a ton to offer, though it was often subtle and hinted at specific impressions more than it actually presented them. I’m sure that experienced autumn flush Darjeeling drinkers would love this tea, though I also think that newcomers to such teas should probably start with some of the more robust and accessible autumn flush black teas. The more of these teas I try the more I concur with the general consensus that the Gopaldhara teas are probably not ideal starting points for beginners.

Wow, so many flavour notes! You really sell this tea, gotta say. Have you tried it gong-fu style? I’m curious if Eastern brewing would highlight any of those flavours more.

So Keta, I have unfortunately not tried this tea gongfu. For the most part, I tend to avoid brewing Darjeeling green and black teas in the gongfu style because I do not believe them to be well-suited to such a process. Others would disagree, but that’s just how I feel. I do, however, frequently brew Darjeeling and Nepalese oolongs gongfu.

Fair enough, I too feel that way about many black teas

Very nice Darjeeling, light but with full flavor. The vendor’s notes are in line with my own thoughts, finding red wine and floral notes. Would like to try this again at first and second flush.

The tea is unique to the Autumn Flush, it gets the red wine character as a result of the Autumn frosts at high elevation wilting the leaves prior to picking.

Thank you, Alistair! I will enjoy trying all three this year as a comparison. And thank you for sending this sample along in my order.

My pleasure, thanks for the tasting notes, it’s always great to get another’s perspective.