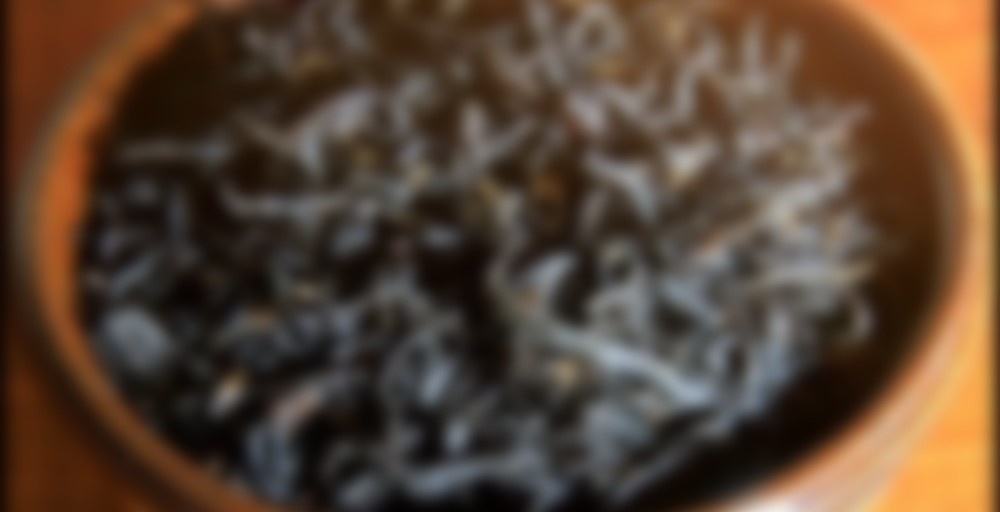 by Whispering Pines Tea Company
84
You

Pine Peak Keemun is an excellent, high grade organic keemun with beautiful notes of pine and cocoa! The smoothness of this golden-tipped tea is brought together with a lightly floral aroma and a long-lasting marshmallow-sweet aftertaste! A great, lighter everyday tea!

I’ve been hoarding this for a while, so it was time to have a cuppa. There is a somewhat pine scent, and a little bit malty. The flavour is mostly honey and baked bread. It has pine notes as well. Having another cup in my pinon pine forest.

Mmmm I’m missing those pines, and the ponderosas!

Interesting! I definitely get pine notes from this – not pine needles, but an impression of freshly-cut wood. I don’t know how to describe this flavour, but I think it’s more woody than smokey. Unlike everyone else, I’m not getting any cocoa from this at all, lol. It’s also much lighter than I’m making it sound right now – there’s a really interesting crisp, juicy, cucumber note that I would associate more with white than black teas. Also some mineral notes, especially in the finish, and and all the flavours linger quite a while in the aftertaste. Drinking this tea feels like drinking from a cool mountain spring – very light and refreshing. I think that overall I tend more toward richer, more robust black teas, but I’m glad to have this in the cupboard for when I’m in the mood for something different. :)

I enjoyed this – it is very smooth, not bitter at all, and has a malty rich flavor. What differentiates it for me from other blacks I’ve tried is the hay flavor mixed in there, which I normally don’t taste in black teas. That said, it didn’t wow me enough to want to buy more.

I love black teas. This is so original in my book. So crisp and refreshing. It goes down very smooth, almost creamy. Its not overpowering like other black teas, definitely sippable to the last drop!

This was a free sample in my last order. It also happened to be on my wishlist, so kudos to WP! The aroma has that Keemun smoke, but also a molasses raisin sweetness. It tastes just like chocolate covered raisins. Seriously! It is so sweet, almost too sweet, and I didn’t add any sugar. The smoke is extremely subtle. This might be my favorite black tea from WP so far. :)

This is the tea that I’m currently drinking, so I’m definitely posting out of order right now. But, I feel like I’m making some very good observations right now with this blend so I think it’s important I write my note now and not later when I’ve forgotten them!

Sipping on it, the first thing I noticed was a very lovely and rich cocoa flavour. This aspect of the tea I’m greatly enjoying! However, this quickly transitioned into some really, really intense raisin-y notes. I am not a fan of raisins and I am perhaps maybe a little harsher/more critical of teas with raisin flavours in them because of this. However, ultimately it’s not the raisin I’m picking up in this blend that’s overall leaving me feeling a little out of step with the tea.

The more I sip on this the more I’m observing a sharp tangy or sour fruit note and a very powerful yeasty bread flavour that is increasingly reminding me of rye bread. I do like rye bread; there’s a pleasant sourness to it that I find appealing, and it’s interesting that this tea is conveying that – but overall with the flavour there’s a very displaced and disjointed feeling to those notes and it’s hard to feel at ease sipping on this one.

Perhaps it’s a little bit of an acquired taste/flavour? I have more of this so I will certainly be playing around with how to prepare this one to see if I can produce a better cup.

But again, reiterating that there’s nothing wrong with the tea itself; it’s just simply not to my own tastes! I still understand why it’s popular and can appreciate the interesting notes that are present.

I’m not a fan of raisins either!

My first experience with Keemun wasn’t a great one; I found it bitter and kind of smoky, and I’ve more or less avoided them ever since. I received this as a sample with my last Whispering Pines order, though, and based on the success I’ve had with their teas recently, I felt encouraged to give it a try. I followed the recommended parameters and used 1/2 tbsp of leaf, in water just cooled from boiling (about 200 degrees), for three minutes. No additions. The resulting liquor is medium brown, and smells of malt and chocolate.

Upon tasting, I’m instantly reminded of some of the Taiwanese black teas I’ve tried. This shares the same fruitiness, and has the undisputedly delicious bread and chocolate notes that I really enjoy in plain black teas.The initial flavour is chocolate, and while it has a creaminess and a lightness of flavour that put me in mind of milk chocolate, it also has a slight cocoa-like dryness that reminds me of a high quality dark chocolate. After the chocolate comes the distinctive taste of bread; rye like and a little yeasty.

For all the rich-sounding flavours, I’m actually finding this quite a refreshing, clean-tasting tea. There’s a hint of something almost eucalyptus-like right at the end of the sip which leaves a fresh coolness on the palate. I can definitely see why it’s called Pine Peak!

After tasting this one, what I’d really like it to breathe some mountain air. As that’s not possible, I’m going to settle for trying a few more keemuns. Hopefully some of them are as good as this one!

this one is really different than a lot of keemuns that i’ve tried. Sounds liek your first experience was with the smokey variety…

I have been a little askeered to try this tea. I have read in tons of other reviews about the smoke in keemuns. I didn’t smell any smoke in this, though. It just smelled malty and tasty. I could smell a light pine but didn’t taste it at all, which was fine with me. Tree flavor was another I wasn’t sure I wanted to try. :) But this was lightly fruity with some mild sweet maltiness. This is pretty good. Thanks, Veronica!