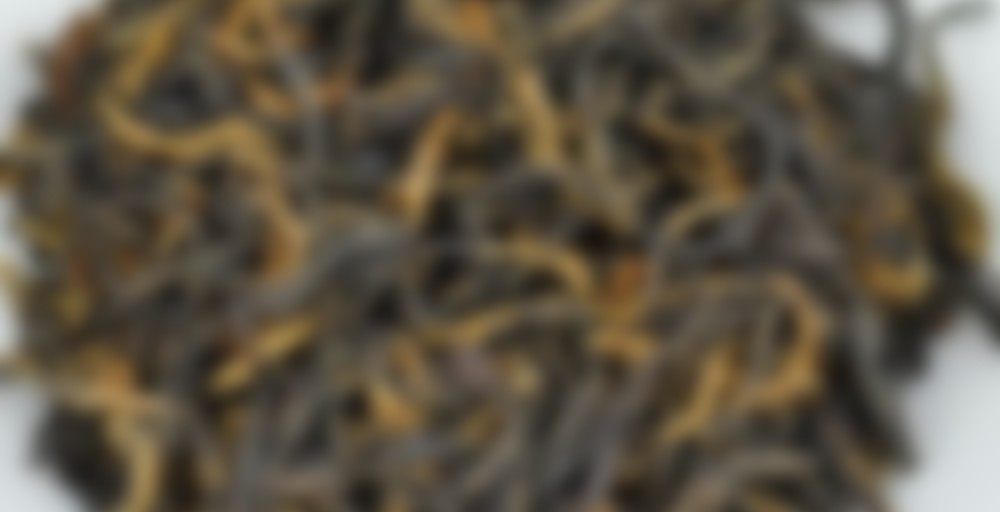 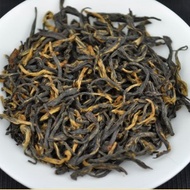 Bai Lin Gong Fu Black Tea (aka Golden Monkey) is made from Fuding Bai Hao “White Pekoe” varietal tea leaves. Our Premium grade is a one leaf to 1 bud semi-tippy grade. The tea leaves are picked in sets with 1 leaf and 1 bud. The processing allows for a golden-orange furry tip complemented by a dark leaf.

Slightly bitter taste. Warming. Very savoury. Perhaps that is why I am the only one to dislike this tea. I prefer sweeter teas (like early grey and vanila black) and certainly don’t need a warning tea where I live. Not for me.

I guess I’m finally writing tasting notes for my Yunnan Sourcing teas that I bought last year before my dad’s stroke (it will officially be a year in a few days). He is doing good! He is coming along with his speech. AND he has been riding his bike and even went kayaking recently… so to see him doing these things now after seeing him in that ICU bed last year is amazing.
Also, SO MANY awesome books were released today. Sigh. I can never keep up, even if I was reading a book a day. A new Helen Dewitt last week and now There There by Tommy Orange, a new memoir by Porochista Khakpour, and more by Lauren Groff, A.M. Homes, Marisha Pessl and a couple more that sound awesome. AHHH. I am a READER but I am SLOW. Help.
On to the tea… I did buy the 2016 harvest of this because you guys gave it the best rating. The leaves here are twisty and wrapped together, black with hints of gold. I steeped them in a teabag again to make sure the barnacled infusers had no impact on the leaves (to be honest, I haven’t really noticed a difference in the steeping of the YS teas so far anyway, between the teabags and the barnacled infusers.) I do love golden monkey teas. I expect them to result in a black murky brew though. This is more like a light red. There is a complexity to the flavor here, it’s just not as deep and dark as I would like my golden monkeys to be. It’s nice that it’s complex though. Malty, smooth, sweet… hard to describe The second steep seemed more savory but much the same. I really don’t want to have to use two teaspoons of leaves every time to get great flavor. Hmm.
Steep #1 // 2 teaspoons for a full mug// 15 minutes after boiling // 3 minute steep
Steep #2 // few minutes after boiling // 4-5 minute steep

I’m glad to hear he is doing better. I’m a slow reader too. I normally have to renew my library books twice and then I still don’t get through them all (I should know to take out one at a time).

Thank you Arby. :D And happy reading to you!

I’m a librarian and still can’t get through my books in a reasonable time! I’m such a slow reader, and the worst part is seeing all the awesome new stuff every day on my cataloging carts, and having to tell myself, “Noooooo, you don’t have time for this!”

Well, if it helps… it’s inspiring to me that an actual librarian can also be a slow reader? :D Even if I was reading five books a day, it wouldn’t be enough. And then I mention the crazy amount of new books out and what am I reading now? Charlotte Bronte’s The Professor. haha.

I have a stack of three graphic novels next to me right now, and haven’t even managed to get through those. And I have notices telling me that two of the three have already gone through their three auto-renewals. Now, the one perk of my job is that I don’t get late fees, but still, it’s just pathetic. I really should be ashamed of myself!

haha, yep. I think I spend more time thinking of everything I WANT to read instead of actually reading… and I have that same problem. Even if I’m only thinking of the graphic novels I want to get to… that’s too many right there just in graphic novels! sigh.

Sipdown! This is my fourth sipdown today, and I’m still going.

hey, I’m impressed with one sip down and four, well, wow!

Brewing from the 2016 harvest.

I tend to use a lot of leaf in my pots and doing so with this tea brought a slight astringency to pucker the cheeks, perhaps the “little bite” in the description.

After making an adjustment in my brewing parameters the sweet fruity malt in this tea became apparent.

Reminds me of a robust English breakfast.

Oh, how I love this tea!

Today was the last day of the meditation retreat I was participating in. I learned a lot. I benefitted a lot. It was awesome and I am sad to see it end.

Hope reentry to your normal routine is gentle and smooth!

The retreat acted like a recalibration on all the things. I certainly am in better shape than I was at the start of it. Now to carry that into everyday life. We’ll see.

This tea is one of the first non-Teavana loose leaf teas I ever tried. I remember not liking it all that much, and I believe swapping it away before I finished the full 50g. This past weekend, I was working near where an online teafriend lives, so I paid him a visit. He gave me a nice goodie bag, including some teas to try and convert me to a life of hong.

This one was totally different than I remember it being. Quite possibly due to my different brewing techniques or something. I liked it quite a bit! I didn’t take particularly good notes, but I do recall liking it, which is more than I can say about it the last time I tried it. Thanks for the tea, James!

This isn’t really much of a review, but as a tasting note, I find it interesting that I had such a different experience with it now and when I first started drinking tea.

Edit Turns out this one was actually the Classic Laoshan Black from Yunnan Sourcing, but there was a labeling mixup. The Bailin actually tasted pretty similarly to how I remember, but I still enjoyed it more than I did before.

Finished this one off today with a little maple syrup. I had a dream last night about the other JustTea tea tha ti need to review, but was unable to get to this weekend. At least one is done but i was dreaming about the other so hopefully the weather will cool a little so i can get to it.

Ha. I’m surprised I’m not dreaming about the other JusTea tea I need to review! :D

For as long as I’ve been alive, I’ve hated black tea. Although I grew up in a family of chai drinkers where the kettle was always whistling and strong black tea with milk was served all day long, I was the odd one of the bunch that could never stomach the stuff. The smell and taste of it literally made me sick to my stomach and my aversion to it continued well into adulthood. So after spending over 3 decades assiduously avoiding black tea, my turning point came recently when I discovered this Yunnan black.

I picked this up with my Yunnan Sourcing order for my father who enjoys Golden Monkey tea but had been paying nearly 4x as much for it at Teavana. Out of curiousity I took a whiff of the tea leaves and was intrigued by the delicious malty smell, which was nothing like the black teas I’ve experiencd. So I set aside a small sample for myself.

The first time I brewed this tea it was too tannic and it reaffirmed all of my misgivings about black tea. I stashed it away for a future tea swap and forgot about it. A few months later as I was organizing my stash, I stumbled upon it and decided to give it another go.

This time I under leafed, using a scant teaspoon of leaves for 110ml of water off the boil, steeped for 3 minutes. First steep there was rich, yummy maltiness and chocolate. A moderate amount of tannins but not too off putting and they went away after the 1st steep. The second steep had strong notes of caramel, maple syrup, and some cocoa. The third infusion was sweeter with an astonishing brown sugar like flavor. The later steeps threw off even more brown sugar and left a maple-like sweetness in the throat.

I’m very impressed by this tea. It’s robust flavor, natural sweetness, and low bitterness make it a winner in my book. It’s quickly becoming a part of my regular tea rotation and marks the beginning of my adventure into the world of black tea.

This is some sort of miracle. It gladdens my heart that you have found your way back to the, potentially, glorious world that is black tea.

Haha, indeed its a minor miracle. I think low quality teas had clouded my perception of black tea. Happy to finally discover the good stuff!

I am putting this tea that prompted your conversion on my list of things to order the next time that happens.

Now you have an entire section of YS to catch up on!

It’s something I might want to try to, isn’t it Evol and Luckyme?

@Evol Ving Ness So glad you liked it…always happy to be an enabler!
@Daylon R Thomas I’d definitely check it out if you’re planning a YS order. It’s a pretty amazing tea and inexpensive to boot

Daylon, it might be a bit too strong for you, but I think you should give it a go anyway. With a light hand. Light hand, do you hear me? :)

And yes, LuckyMe, this one will likely be on the regular with me for some time.

So, once again I got a tea largely due to its awesome name. I was rewarded. This tea has big flavors and great complexity. You can smell it ten feet away after you’ve brewed, and its aftertaste lingers in the mouth for quite a while. The power of the golden monkey is great!

Recommend this for someone looking for a black tea with lots of flavor and lots of personality.

Sipdown! Though I brewed this at the correct temperature of 195˚F, it was slightly bitter (perhaps due to the tea dust at the bottom of the bag). Still smelled divine though. I added milk to this tea for the first time and it was great, sweetness restored. No need for sugar. Perfect for a “high tea” tea when you don’t want to drink this tea as a purist.

I already bought the Imperial Grade of this tea (2017) from Yunnan Sourcing so am interested to compare them tomorrow.