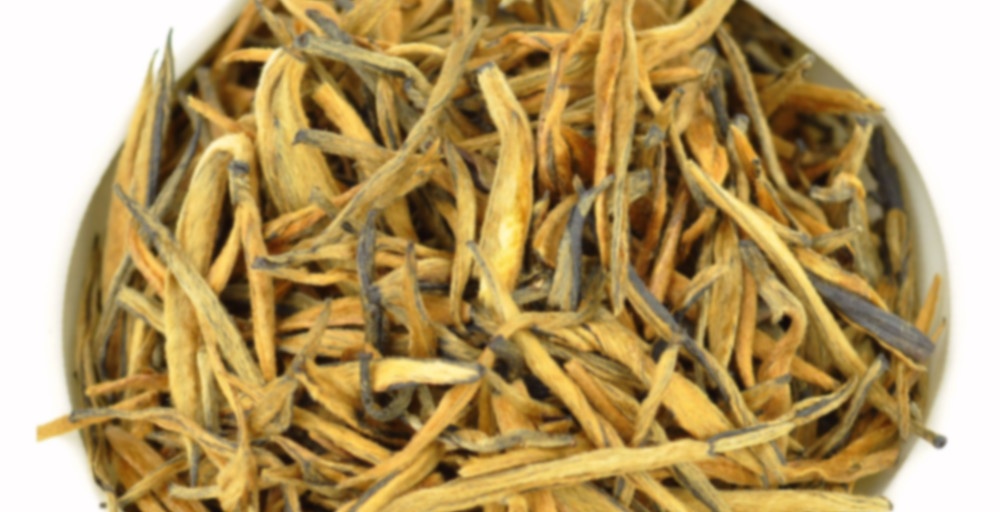 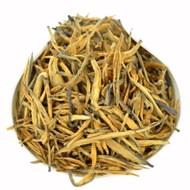 This is a pure bud Feng Qing area black tea. The tea varietal is a classic Feng Qing hybrid grown for more than 70 years. This is from the original (and old) plantation bushes. The tea was plucked during the first flush of Spring and then expertly processed into this complex and delicious Dian Hong style black tea.

The taste is pungent, sweet, and earthy with a malty-thick viscous mouth feel. The aroma is sweet and floral. The buds are thick, hairy and heavy. The tea can be infused many many times without losing its interesting and delicious taste!

Well, a new year has arrived and I am still trying to get all of my backlogged reviews posted. Go figure. 2018 was a horrible year for me and just about everyone I know, so I’m hoping that 2019 will be better. I’m already making some progress on my New Year’s resolutions; I spent last night and most of this morning reorganizing my record collection and boxing up the records I don’t want anymore so that I can sell them. I’m about halfway done with that and would have gotten more done had my plumber not shown up to work on the outdoor faucets. I’ve also been working on keeping my house cleaner and have started a new workout regimen. I’m trying to get my sleep schedule back on track too and have started applying to graduate programs in earnest. Kids, really take the time to find a stable professional niche unless you want to end up like me and starting all over from scratch as a 33 year old. Getting back on track, this was the last of the black teas I drank in December. Of the bunch, it was one of the best and by far the most unique.

Prior to the rinse, the dry tea buds emitted aromas of malt, hay, straw, marshmallow, and eucalyptus. After the rinse, I detected new aromas of roasted peanut, black pepper, cream, chili leaf, and bay leaf. The first infusion then introduced aromas of baked bread and green bell pepper. In the mouth, the tea liquor presented notes of malt, hay, straw, marshmallow, baked bread, and cream that were chased by hints of grass, watermelon rind, brown sugar, and roasted pecan. The subsequent infusions quickly introduced aromas of ginger, butter, orange zest, roasted pecan, sugarcane, cinnamon, and sweet potato. Notes of black pepper, green bell pepper, bay leaf, and chili leaf belatedly emerged in the mouth along with stronger and more immediate brown sugar and watermelon rind notes and hints of eucalyptus and roasted peanut. New notes of minerals, vanilla, orange zest, butter, cinnamon, sweet potato, honeydew, earth, and sugarcane also appeared along with hints of ginger and celery. Each swallow saw the eucalyptus, bay leaf, celery, and green bell pepper notes linger, leaving a unique herbal, spicy, vegetal aftertaste. By the end of the session, the faded tea liquor offered mineral, malt, cream, marshmallow, and baked bread notes that were chased by a slight woody note that I did not previously catch and hints of watermelon rind, sugarcane, roasted peanut, orange zest, earth, vanilla, and hay. Naturally, the swallow was still followed by a spicy, herbal, vegetal aftertaste, but it was subtler this time and the green bell pepper notes were absent.

This was a very complex tea with a ton to offer. Compared to some of the other Dian Hong I have tried recently, this one was much spicier, more herbal, and more vegetal. Like every other Feng Qing tea I have tried, it had a unique character that is hard for me to accurately describe. Established fans of Feng Qing teas would probably find a ton to like in this offering, but for those of you who have not tried as many Feng Qing offerings, this would not be the tea with which to start due to its complexity.

Yes, it was definitely a bad year for most. Here’s hoping for a good year for you and others. :)

33 is still young. ^^ When I was deciding on a 2nd doctorate (law), my mentor in law school told me she was 55 when she began & she was absolutely frickin awesome, had a great practice, everything. :D. She told me “In 10 years, you’re going to be 10 years older anyway.” Best. Advice. Ever.

eastkyteaguy: wanted to let you know you’re not alone at starting over from scratch at 33. I’ll be done with my current educational path by the time I’m 38 assuming no more major setbacks. Keep your eyes on the goal and you’ll get where you want to be. Send me a message sometime if you’re having doubts.
What records are you selling?

derk, Right now I’m decluttering the house and selling off a lot of alternative/indie rock and indie pop records to a collector I know. I spent way too much money on music and tea the last couple years. Part of my collection of the former has been cluttering up my bedroom simply because I do not have enough storage at present, so I’m getting rid of a lot of the stuff I don’t listen to as much. I tend to listen to mostly older music anyway, but have had a huge collection of more recent alternative and indie for several years. It was either get rid of that or get rid of my collection of metal and older rock records, so I opted to keep the stuff I listen to more frequently.

Oh, and right now I’m looking toward school psychology as a career path. My undergraduate degree was in English. I then completed a graduate certificate in nonprofit management and an M.A. in teaching. Unfortunately, I came out of my M.A. program right as the state was making some pretty drastic changes to the middle and secondary grades curricula, and I was not able to secure a teaching position upon graduation due to my academic specialization not being tested at the time. I then ended up working in the mental health field simply because I could not find a job in my profession. Honestly, I very quickly came to dislike teaching anyway. I had the potential to be good at it, but I found out that I could not stand the workplace politics during my teaching internship. I left my old employer last year with the intention of going back to school. At the time, I was thinking about occupational therapy, and I had looked into chiropractic prior to that, but ultimately wanted to do something that combined my background in education and mental health and that would both allow me to make decent money for once and not teach. I tried to find a better job in the meantime, but my resume is totally shot. I’m currently employed in a business my parents own, so employers won’t take that experience seriously. My previous employer’s HR department apparently has an unofficial policy of not providing references. Even if I could get some of my old supervisors to give references, most have either been let go or have retired since I left. With the exception of maybe one, the two who are still there are totally untrustworthy. My employer before that replaced their entire administration, and their HR never kept accurate personnel files. The company that employed me before that was dissolved. Both of the counties in which I worked as a substitute teacher have undergone administrative overhauls. I can’t even get references from my teaching internship since my teacher mentor (who was an alcoholic jerk, by the way) was transferred to another school (well, actually fired and then rehired at a different school within the same school system from what I understand), and the school I interned at was also consolidated, so it no longer exists.

That sucks :(. Getting letters of recommendation and/or references is frustrating in itself, let alone compounded with so many unfortunate events. If your work ethic is anything like your reviews (details, fluidity, comprehensive…. Etc.), I have no doubt, in the end, you’ll be highly successful. I’ve found people who are excellent at “play”, are excellent at “work”. Let us know if you need anything.

eastkyteaguy: I was able to set up my turntable in my bedroom over the weekend. I was hoping to get a peek at what you’re selling, but alas they’re on reserve. Good call on keeping your metal and rock albums. My collection is small, only about 25 records. This friend of the family I moved in with is an old hippy with a library of 50s-80s rock, jazz and soul in the garage. Like people are doing on Steepster with sipdowns, I made it a goal to listen to one of her records every day. Tonight is The Who — The Kids Are Alright

I feel your struggles, guy. I haven’t exactly gone down a straight path post-graduation due to being quick to bore, unwillingness to play politics, perhaps foolish decisions and a lack of drive for money. The company I worked for 5 years recently shuttered its doors after 20. In my experience, employers will take any reference you give them, whether from a family business or a previous supervisor. One of the women I supervised just got what would be considered a dream job in our field with her persistence and knowledge and the help of my reference despite the company being dissolved. And I wasn’t even a forewoman. Are administrative or HR references necessary in the field you are pursuing? I bet you could find old connections on ugh LinkedIn.

derk, unfortunately, all of the stuff I am getting rid is probably what you would not be interested in. All of my 60s-early 90s stuff is staying. This is mostly more contemporary indie and alternative. I’m familiar with The Kids Are Alright, by the way. It’s a great jumping off point to exploring The Who’s discography. In my opinion, they never released a truly bad album, but that particular compilation provides a great introduction to a lot of the better material from their best years. It also gives the listener a wonderful feel for The Who as a live band and has an iconic cover to boot. If you haven’t already seen it, track down the documentary from the late 70s for which it served as the soundtrack. Oh, and yeah, my field unfortunately relies on administrative and HR references. At this point, I’m no longer that worried about the job front. I at least have a steady source of income and have been making some headway with graduate applications. I had a successful introductory chat with the coordinator of one of the programs to which I am applying yesterday afternoon, so going back to school and starting over now does not seem quite as frightening. I’m kind of looking forward to it honestly.

Earthy, thick, honeyed malt with molasses notes. A beautiful dry leaf that makes a tea that is delicious both hot and cold with multiple infusions possible. Om nom nom.