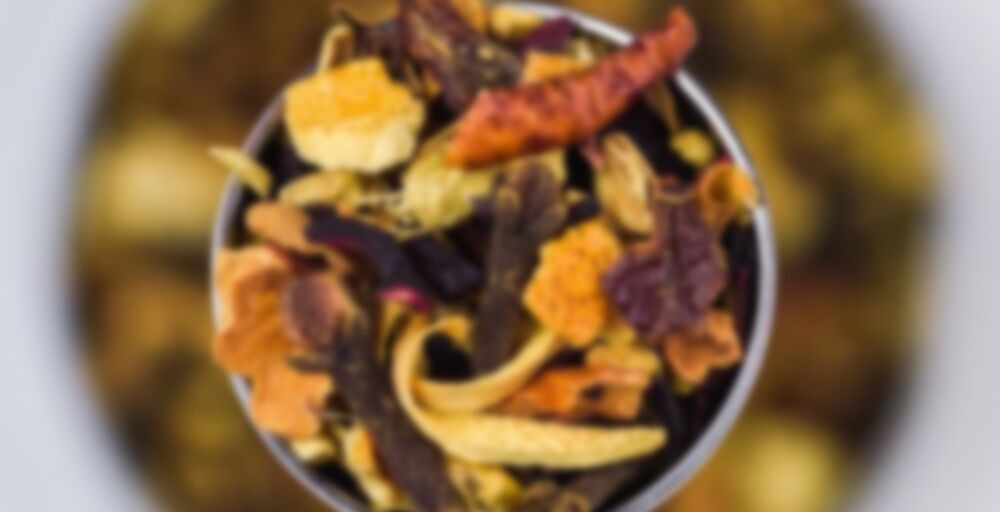 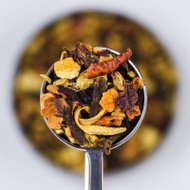 Remember when you were young and you got to decorate clementines with cloves? Remember how amazing and Christmassy it smelt? We’re bringing you back with this delicious tangy but sweet Christmas blend! The perfect stocking filler or the best accompaniment for your Christmas pud!

I was very excited to try Spiced Clementine on day two of the Bird and Blend Advent Calendar for 2020 – I’d previously purchased Davids Tea’s Satsuma Spice Cake with high hopes and been very disappointed, and this seemed like something that could fill the void that left. The two have fairly different premises, but the similarities are also obvious. When I first opened the pouch for this tea and gave the dry tea a whiff, it was like sticking my nose into a juicy orange – with hints of marmaladey, spicy goodness. The sense was that it was warming without ever having fired up the kettle. I kept my expectations in check, however, as apple came before orange peel in the ingredients list, and I’ve had plenty of times where an herbal tea of any flavour quickly devolves into yet another muted apple cider.

Once said kettle was sufficiently fired up, and tea steeped, however, I found this remained a perfectly zesty orange flavour – and spices! They were so lovely and balanced here that nothing ever touched on “apple cider” (thank you for leaving out the cinnamon!). Instead, I was transported back to the old Christmas shops I used to see popping up in malls around Canada in the 90s, where everything smelled like Christmas, and chutneys and dips were on sample with little crackers or pretzels, and about 3-5 different apple ciders were on offer to try. Strangely, it didn’t taste like the ciders, but like the whole shop smelled.

The hibiscus gave a tartness that was, I believe, just the perfect level here – it was tart but not sour. It balanced the clementine flavour out to a convincing degree without making one’s eyes water or want to reach for a glass of water, as hibiscus sometimes can. It felt like it might be reaching up there, but it never crossed the threshold, maintaining instead its place as a supporting role rather than the starring one.

I’ll frequently reach for a black tea over an herbal, and I’d have loved to experience this as a black tea one could add milk to without fear of a curdling catastrophe, but I still really enjoyed the depths this offered thoroughly, and appreciated how nicely every flavour seemed to complement the others. Every worry and misgiving I had about this tea was assuaged by experiencing it, and I have to say it delivered exactly what the name promised. And all whilst delivering “Christmas” to a tee.

This was my favourite tea from today! It is very similar to some of yesterday’s teas from other advents (I remember from last year that I ended up trying A LOT of spiced orange teas) but I like the spice combination in this one quite a bit – medium spice level with emphasis on the clove and star anise!

Clove is probably my favourite typical “chai spice” ingredient, but it’s not super popular in North America so it’s always nice when I see a tea company lean into it with a blend. The anise adds to the juicy quality of the orange, and the whole thing just feels full of juicy life and flavour. I can’t remember if this was around in prior years, but it’s definitely caught my attention this year. If there are enough B&B teas in the advent this year to justify an order, this will likely be one that I include.

Today is spiced clementine! I actually added this one to my B&B cart yesterday in preparation for a December order (but wanted to see if it came up in the advent prior to placing an order). This tea smelled super tasty dry — orange-y with some spices and just generally comforting and delicious. Clementines are very much a holiday thing for me, not so much with spices, just on their own — my siblings and I always received some in our stockings, and sadly where we live now it’s not an option to get them, so I was excited to see this tea as a reminder of home.

Hot: Well, the orange seems to be washed out from the heat, sadly. There is some spiciness, but the ginger seems to be most present. Not overly ginger-y, but fairly spicy leading me to think it’s the ginger. I’m also getting a hint of clove at the end of the sip. I’m going to pop the remaining half a mug in the fridge to cool it for later. Lex tells me hers tastes like an orange if you were to “douse it in cloves” haha! So that at least matches the description quite perfectly!

Cold: This chilled in the fridge for the last ~3 hours. Now there is a bit of orange, but it’s very subtle and a closer to a regular orange, not necessarily a clementine. There is quite a bit of orange scent, which is nice. The clove is more prevalent and the ginger seems to have disappeared into the background.

Such a dismal :( I would love a clementine flavour with a spicy twist!

You never know though! Others may find this one delightful! Perhaps my childhood-like expectations were too high :P.

A good balance of sweet orange and strong spices. I tried the bottom half with a bit of sugar in and it seemed a bit overpowering, if I had added a bit less it would have been just perfect.

There is a ginger flavor present. I’m not the biggest fan of ginger, but it’s very mild here and I enjoyed the tea.

Holiday Tea-son! Third tea from my advent calendar, which was one of Bird & Blend’s holiday blends from last year. It’s one of those hibi-hip spice blends so I imagine everyone else is going to hate this one, but I happen to love those. The dry leaf smelled heavy on the orange and spice and reminded me of a blend I’d sipped down just a few months ago when I was fighting off a minor throat cold, Tea Chai Te’s Orange Zephyr, which was an orange/tangerine flavored hibiscus ginger blend. I always loved that tea on my throat. Though this tea smells a little more heavy on the clove than the ginger.

My teabag apparently didn’t have much hibi in it, since my steeped tea was very weak in color, it looked a pale lavender color. I’m sure this news will make every other person on Steepster rejoice, since I’m apparently one of about five people on the whole site that actually likes hibiscus, but if I knew it was going to be like that I would’ve cut the bag open, put it in my gravity well infuser, and added a bit more hibi petal from my stash myself. Is it really supposed to look like that? * checks their Instagram * Nope, definitely should be a nice, deep red. Welp, nothing to do for it now but drink it as is…

…Yup, it’s really weak. Needs the hibi. It’s like the whole base is just missing. It tastes too oily and watery without it. I’m getting a strong orange flavor, and a nice spice mix, but there is no substance. I wonder if I tried steeping a bag of hibiscus into this cup of already steeped tea, if I could somehow salvage this, because this is pretty much undrinkable as is…

Alright, 1/4 teaspoon hibi is going in the cup until it turns a proper red. Fingers crossed.

The cup has turned a slightly darker red just from adding that small amount of hibiscus and is no longer that that pale, pale lavender… and the taste is already drastically improved. She has a pulse! It actually has a base now! Honestly, I probably should’ve added a bit more, but I wasn’t sure what the actual blend was supposed to have and didn’t want to over do it and drown out the flavors, either. But now this is actually drinkable! There is a slight fruitiness to bring out that orange flavor and for it to mix with, so it doesn’t just taste like oily orange water, and the clove and ginger compliments it very nicely.

Still a little unimpressed to get such a bad blend in my teabag, though. Of all the people to receive that teabag, I was probably the one person to not enjoy getting a hibi cider with no hibi, while everyone else would’ve cried tears of joy if that happened to them. Go figure.

(On the plus side, I’m probably also the only person able to fix that problem, since I own plain hibiscus flower, and no one else would…)

I also have plain hibiscus! So. Much. Hibiscus. I bought a big bag from an herbal tea vendor a million years ago, and it goes so far and lasts so long, I will never ever ever not have hibi. I will be passing down antique hibi for generations to come. :P

Hahaha! Yes, write that hibi into your will for your grandchildren, I’m sure they will appreciate it! _ hands out your “Welcome to the Hibiscus Rescue Habitat Society” badge We are a select few on Steepster. Cherish it.

Fruit tisanes are never my favorites, but at least this one sounds interesting. I do enjoy clementines! There looked to be a small amount in the sachet, so I used a bit less water than I normally would.

Meh. It’s not bad, but it’s certainly not memorable. It mostly tastes of orange with some hibiscus tartness and light spicing. As far as the spices go, apparently there’s star anise and ginger in here, but I really only taste clove.

A fairly generic orange and clove fruit tea. It’s pleasant to drink, but not something I would ever purchase myself.

This one is pretty much as the name suggests – distinctively orangey, with a heavy overtone of spice. It’s almost like orange juice infused with spices, except that it’s less sweet than that might suggest. If anything, that’s my one complaint about this blend – clementine, to me, is a slightly sweeter orange flavour. Here, it’s more sharp orangey-orange, which is fine, but not quite what I was expecting. Really, I’m just happy that the orange remains distinctive despite the heavy spicing.

Clove and ginger are the only spices listed in the ingredients, and both of those are present in abundance. There’s also some “flavouring”, though, and I have a feeling that at least a few other spices are hidden in that catch-all. I think cinnamon, for sure, and maybe something like chili…there’s definitely a “heat” that isn’t ginger or one of the tamer spices. Unless, that is, my tastebuds are totally off.

Anyway, I liked this one. I would like it to be a little sweeter, but it’s good all the same.