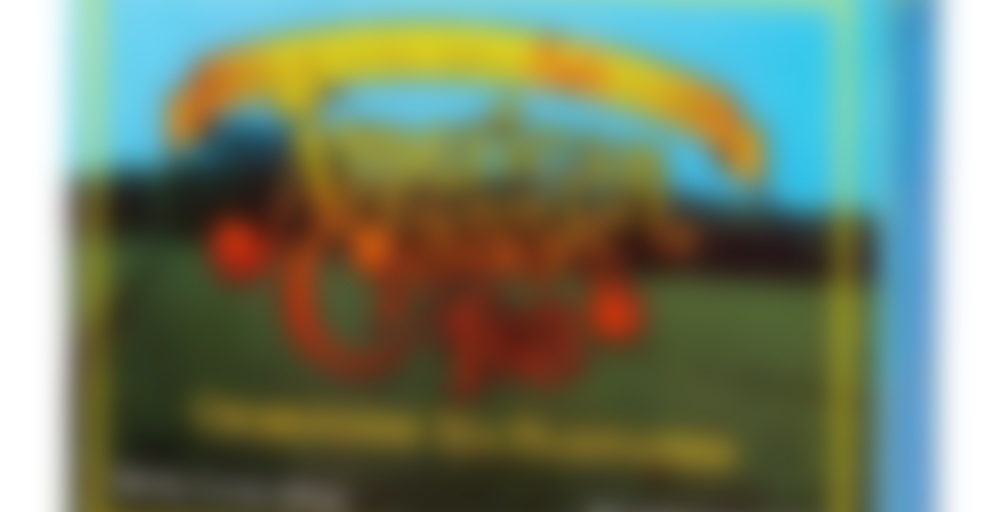 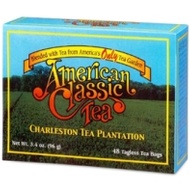 by Charleston Tea Plantation
74
You

Over 100 years ago, tea planters brought their finest ancestral tea bushes from China and India to Wadmalaw Island near the historic old city of Charleston, South Carolina. Now the direct descendants of these very plants have been lovingly restored to their former grandeur here at the Charleston Tea Gardens®, a lush subtropical tea farm. It is in this context of great natural beauty and colonial pride that we bring you American Classic, a noble blend containing tea from America’s only tea garden. The fresh smooth flavor of American Classic has made it a Southern favorite for many years.

I received this tea as a gift for being a good dog sitter last week. I have to say, I was pretty excited, even though this is bagged tea. I am thinking some loose leaf from Charleston is on my wish list. I do find it very good and satisfying. I would not call it a tea for my tea snob days, but it is a very basic black. I am thinking it would also make a stellar iced tea. It is so cool to have tea grown within driving distance of my house, even if it is a 10 hour drive!

Mug method using only 8 oz of water and one tea bag.

I want to thank my friend Melissa (who isn’t on Steepster, but still…) for picking up 4 samples of Charleston Tea Plantation Tea while on vacation for me! It’s so sweet she thought of me! :)

This is the first of 4 I will be tasting and reviewing. Prior to this the only CTP Tea I have had was the Rockville one and that is one of the 4 samples she brought me. I remember liking that one so I am so happy I get to try it again!

As for this specific tea…

The taste is robust yet well rounded and in medium strength for a black. It has a mild yet crisp aftertaste I am really enjoying, too!

I am hoping to visit the plantation when I go to Charleston in June for my niece’s wedding!

I really wish this was in loose leaf or at least family sized so I would be able to put, say, 2 or 4 bags instead of 16… but that said, I like my southern sweet tea strong and sweet, so I was pleased to find that this can handle a pretty intense amount of steep time… as in “oh crap I was supposed to take those out….” still not resulting in a bitter tea.

*EDIT!! My previous note said “I’m not sure what % of this tea’s leaves are FROM the SC plantation—it could be 10% USA tea and 90% other (Bigelow/the plantation haven’t answered my 3 email attempts!), but…” See the comment by Kathy, and HOORAY, it IS 100% SC goodness!

And back to the review: …but it is perfect for cold sweet tea and leaves NO bitterness. I’ve found AGE matters—the boxes aren’t really sealed well and the leaves being quite small, there’s a decent amount of powder that ends up spilling out. Older boxes definitely show their age in strength as it takes several more bags (and when I use 16, it’s for a half gallon that I add a very little bit of ice to). When I’ve been able to get it in grocery stores in NC, though, it was much fresher than what Bigelow delivered (my sister’s b-day gift to me)… still, it’s good stuff. Don’t miss out on it; again, with age, it only loses strength; it doesn’t get bitter at all (I also recommend you store it in zip lock bags or snapware etc—something air tight will serve it well!)

@Laura B, we certainly appreciate your comments on the American Classic Tea..this tea is 100% South Carolina grown tea…..we apologize that you had not rec’d a response to date….we do offer this tea loose as well as flavored varieties of this “southern” Amercian Classic; Please check out all we have to offer at:
http://www.bigelowtea.com/Catalog/Category/36/98/American+Classic+Tea.aspx

I’d been wanting to try this tea for a couple of years now, ever since I found out about the Charleston Tea Plantation. Why? Because it was “Amurrcan” gash-durrnit! Seriously, it’s from one of only two active tea growers in the country. And it’s a robust, sometimes average, blunt, spry, and crisp orange pekoe. Not unlike a certain upstart country I’m proud to live in.

PS ~ Thank you, Jaime, for sending this one along!

It tastes better if you’re actually sitting at the plantation when you’re sipping it. Wish they sold this one in loose leaf.

Trust me, the actual plantation is on my to-do list. And, yeah, it is a bummer that this one isn’t in loose form, but I guess pyramid’ll do.

My hubby is home sick and wanted “plain Lipton.” This is the closest I have!

I got a box or two just a month ago from a friend of mine for my birthday. To my surprise, It was AMERICAN and AMERICAN made tea! I knew I just have to try a bag or two and found it to be quite tasty with lots of milk and sugar.

Anthony, great to hear your were so pleasantly surprised by the American Classic Tea. Please check out and enter for a trip to the Charleston Tea Gardens, where this fine tea is grown. Need to hurry though, last day to enter is January 31st, tomorrow!
http://www.bigelowteablog.com/sweepstakes/

And, in all my ignorance, I think this is perhaps the best, plain, straight-up black tea I’ve had to date. It’s rich, thick, and slightly sweet. It has the perfect astringency.
And, if you like good ol’ Southern-style sweet tea, there’s nothing I’ve found yet that makes a better pitcher.

Boiling 5 min, 0 sec
Yours I Like This
2 likes
1 comments
Edit

Jaime,
There is no such thing as tea ignorance, there is only what you personally enjoy! So glad to hear about American Classic Tea.

Recently, I was given some American Classic Tea. Currently this is the only tea grown in the continental United States. The tea confusingly says Loose Leaf Tea in a Pyramid Bag, which is a direct contradiction. In many ways this is a traditional red tea, dark color, single infusion, and elements of bright citrus, perhaps too bright, as I’m about to explain; with a full mouthfeel. What makes this tea unusual, and I am unsure if this is because of the tea itself or the packaging that it arrives in, is a strange sour/sweet metallic taste in the forefront of the flavor profile. While not immediately bad tasting, it is very strange compared with, well any other tea I’ve tasted, as if the tea were almost completely devoid of tannins.

How I brewed it:

In terms of brewing trials, I brewed the tea two ways, once in a mug, for 3 minutes, and a second time, where I removed the tea from it’s bag, and brewed it in a gaiwan (lidded bowl) for roughly one minute. Because I got the strange metallic flavor in the first trial, I decided to try making in the gaiwan, sans bag, to see if that removed any of the metallic brightness, which it did not.

Overall, due to the almost unpleasant brightness, I’m going to give the tea a fairly low rating, however it did fulfill the other criteria of being a basic red tea, and by no means is it totally undrinkable, however, there are many, many other better bagged teas, with less ostentatious and incorrect marketing, that are far cheaper and less pretentious.

From additional readings, it seems that it really is primarily used to make iced tea, and sweet tea at that, where one really only uses tea as a carrier for syrup, and the ultra-brightness would likely work quite well.

I didn’t even know America had a tea plantation! While vacationing in South Carolina I happened across this, and, being me, had to buy some. I gave it a try and was pleasantly surprised at the taste of it. Don’t steep it too long, as it’s heavier than most, but it’s a perfectly drinkable standard black. This tea is bland if you’re used to flavored teas or other malty/oaky/bright/coppery blacks, but I do recommend picking up a box if you’re in that neighborhood, if only for the novelty.

I have had the 12ct with loose leaf inside the bags, which was VERY good. The 12ct box has a South Carolina Grown Certification seal on it. All of their products, besides the 48tagless have the seal on it, besides this one. I have asked a few times about why this is, but have yet to recieve a straight answer. How come when all other American Classic Tea products have the certification, why does the 48 tagless not? It seems peculiar to me. However, the tea I have tried of the 12ct box was extremely good and well balanced.

I have just recieved word that the 48tagless is in fact grown in America, I am still slightyl suspicious….but I have to believe it