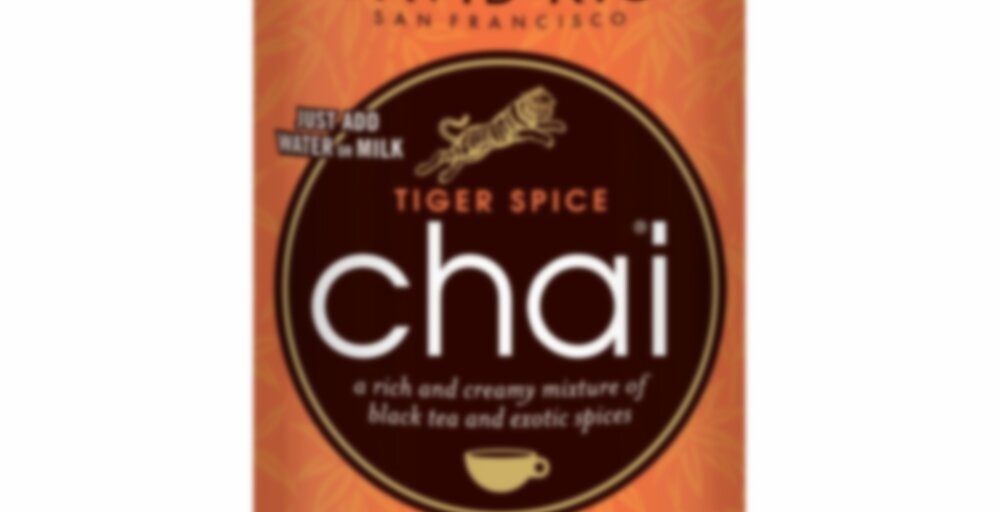 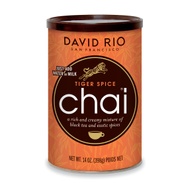 David Rio’s signature and award winning chai is a rich and creamy mixture of black tea and premium spices, including cinnamon, cardamom, and clove. A percentage of profits from the sale of ALL David Rio Tiger Spice Chai® will be donated to the International Fund for Animal Welfare.

Yeah, I’m still really behind. sigh I hope to get caught up one day!

Anyway … I received a packet of this chai mix in one of my Love With Food boxes … and I was happy to try it. David Rio is a company I’m familiar with because back when I was first starting out in the tea business (blending/selling … not reviewing!) I sampled quite a few of David Rio’s products as I did have some customers that expressed an interest in a chai mix rather than a loose leaf … and had I decided to ultimately offer a mix … I would have gone with the David Rio product because at the time, it was my favorite of the ones that I had tried. This was many years ago, and I’ve since had the opportunity to try some newer brands out there … but this is still pretty darned good for what it is.

However, I can say this … my taste buds seems to have … developed since the last time I had this because I used to like this a whole lot better than I do now. Either my taste buds have improved or the competition has improved (or perhaps … a little of both.) I used to love this stuff … but now I’m finding it just … OK. Drinkable … but not something that I’d keep stocked in my kitchen for everyday consumption … or even more than occasional consumption.

Good, not great … but I do like that David Rio is committed to a good cause (the welfare of animals.)

LOL … thanks a bunch for your confidence! :)

mostly i just don’t want you to catch up or i feel like i’d see less fun notes to read! :)

Apparently I’m doing my backlogs out of order. Oh well. This is from today, the train trip home from work.

Takgoti wanted me to try the spicy chai at that bagel place too, and today I was feeling brave enough to do so. I just got the smallest cup they had in case I didn’t like it.

Turns out it wasn’t really the sort of ‘spicy’ that I was expecting. I was think ‘spicy’ as in sort of ‘hot’. Not cayenne-pepper hot, but something that would definitely be felt a bit in the throat while sinking. Instead it was a more warming spicy, and it was actually quite sweet.

I was also a little concerned about the fact that it had ginger in it, and I’m under the impression that I don’t much care for ginger. The first chai I bought for myself ever and tried to make had something or other in it, a strange flavour that I can’t quite recall anymore, but when telling others about it, they said that it was most likely to have been ginger. This didn’t seem to have that particular flavour. Or at least not in a concentration where I couldn’t get it down.

I could smell cardamom very clearly. I wasn’t even in doubt about it. I could taste a little sweetness from cinnamon too and I was a bit on certain about whether or not it also contained vanilla.

It reminded me of the elephant vanilla chai, except not quite as sweet. It wasn’t the same sensation of drinking something that was actually supposed to have been a sweet dessert, but it was much better than I had feared. I can’t really decide, though, if I liked this one better than the elephant vanilla chai or not. In some ways I did, but in some ways I didn’t. I can get a medium sized cup the next time, although I still don’t think I’d be able to drink more than that of any of them without it becoming way too much.

Way to be with the braveness and the trying!

Glad to hear you enjoyed it [and that I didn’t encourage you to tea doom]. I’ve been looking at the David Rio site lately. SIGH, too much tea. Not enough moneys.

This is about the 5th time I’ve used this mix and I think I’ve got the hang of it. I mix about 3 tablespoons with 6 ounces unsweetened almond milk and 2 ounces of espresso. The unsweetened milk really changes the flavor and makes it more balanced. Since I’m not focusing on the sugar, the spice comes through a lot better and it’s a delight to drink. It’s bumping Granville Island down a notch!

A friend bought me a container of this since I’m a chai fiend. I really like it. It’s NOT spicy as the name implies. Rich and flavorful, it’s a favorite of mine in the late evenings.

Love, love, love, love, love this ‘tea’. I used to work at Borders and this is THE EXACT blend of the original borders chai ‘tea’. I use tea in quotes because I never make this with water (and neither did Borders). I make this tea just like I do with hot chocolate — heat up a mug of milk and add in this chai blend, stir and enjoy the guilty pleasure of it. I don’t drink it a lot because even using 2% milk, this is too fattening for me. The blend of this chai is utterly perfect: It is not too sweet and each of the amounts of the various spices (cinnamon, clove, cardamom and ginger) are perfectly in tune with each other. I will constantly have some of this in my cupboard. Love!

Finished this one off as an almond milk latte; which was pretty tasty but not all that different from any of the other Chais that I’ve had from David Rio. Perhaps a TINY bit heavier on the spice? Regardless, I think I’m done with this company again for a while – it was nice to do a bit more of a deep dive into some of their other offerings, but I’ve had enough at this point now…

Bleh, it’s wet and miserable outside today so I treated myself to a chai latté. This is apparently David Rio’s default mix and it’s quite nice, I had it will 2 oz boiling water and about 6 oz hot skim milk that I’d given a bit of a froth. The downside of using skim is that it doesn’t stay foamy for very long due to the lower fat content, but that means I just have to be quick about enjoying my latté, right? ;)

There’s a good , well-balanced mix of spices and it gives this mix a pleasent warmth. It’s maybe a bit sweeter than I care for but most mixes are I’ve found (I’m the person who always has her sbux drinks half-sweet). It’s a nice mix to have on hand for days when you don’t want to fiddle with making chai the old-school way.

How do you heat/froth your milk anyway? I’ve been far too lazy to make a proper latte despite the fact I purchased an IKEA handheld milk frother months ago.

I usually just heat the milk in a pyrex measuring cup in the microwave (just be careful that it doesn’t boil) and use a hand-held frother to whip it up and pour it into the tea (or the mix in this case) in my drinking mug. I also usually add a bit of boiling water (usually like 1/4 cup) to the mug first to raise the temperature.

Ok cool, thanks, that seems like the best way, really.