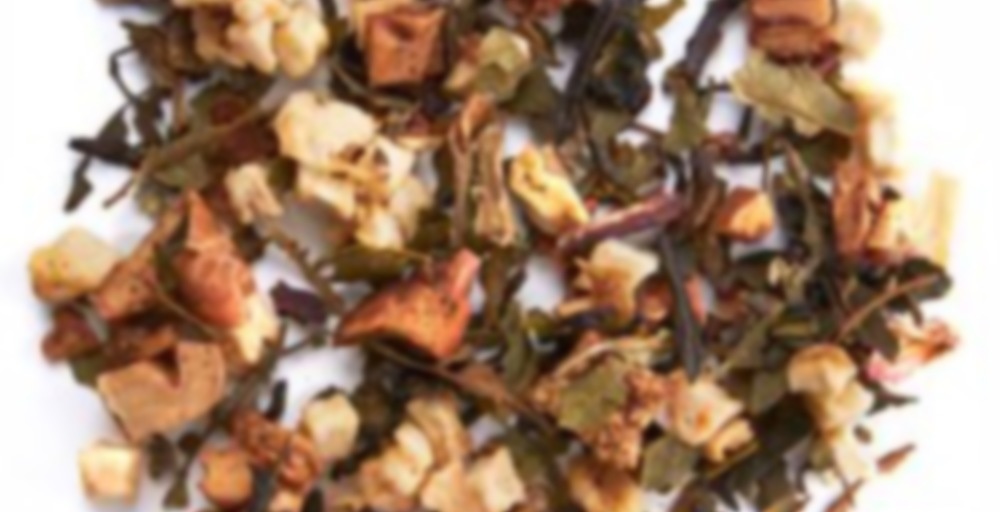 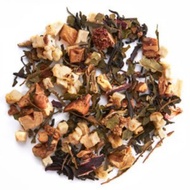 Someday my quince will come.

Once upon a time, there was a bright, golden fruit. Not quite an apple, not quite a pear, but a different fruit altogether – with a divine, slightly floral aroma. The ancient Greeks used it in their wedding rituals. The Romans stewed it with honey. And it was even said to be Aphrodite’s favourite fruit. One day, we took this magic fruit and mixed it with apples, black tea and sweet blackberry leaves. Fruity, floral and rich, it was a match made in heaven. And they all lived happily ever after.

Drank this while watching the GoT finale last night. Luckily, I tried it before the show started, otherwise I would have just been blindly consuming it. I was actually fairly impressed with it; I have no familiarity with quinces, but there was an unfamiliar flavour in the tea which could have been it, and it was pleasant. Aside from that, it mostly tasted like a non-hibby fruity black tea (heavy on the fruit, very light on the tea). Had I had more of it, it would have been a great candidate for iced tea, but I only had a cup’s worth remaining of my sample.

Overall, not bad, as always I wish there was a bit more actual tea flavour in here, but the fruit combination was sweet and pleasant.

I didn’t do the GoT thing, but I did mist up during the Big Bang Theory finale? Endings everywhere. Mercy, what will we all WATCH now? (I think I can hold out till the Downton Abbey movie in September. Maybe. ;)

I don’t think I have ever tasted quince! I will have to check it out.

I only watched the first few episodes of the first season and stopped because it was such a chore to acquire the episodes. Should fire it back up! Although I hear that this recent season has been quite polarizing for watchers.

@gmathis – I was much too far behind to watch the Big Bang Theory finale, but I’ve had portions spoiled for me, so I’m a bit annoyed! I never watched Downton Abbey, but it did always interest me.

@ashmanra – Unfortunately, I think this one was limited edition from last year(?) so probably still unavailable. I’m curious if there are other quince teas around, though.

@Fjellrev – I think we streamed them from various places until we got an unpleasant email about it…. so we purchased HBO + Crave for one month so we could watch past episodes and catch the finale live. Hahahaha. (Bonus, we also got to watch the rest of Westworld, though we’ll miss season 3 of it as our subscription is done in a week.)

Also, yes, polarizing is one word for it. I’m at peace with it and don’t think the ending was terrible, but parts did feel rushed, especially when compared to some of the goings-on in previous seasons.

Nondescript fruity black tea. Stronger than the ones I usually bring to work.

Definitely makes a nice iced tea with lemon. When warm I find it’s way too floral to consume, it almost tastes like old perfume. But I suggest getting this, it is nice when cold and mixed with lemon to compensate with the floral taste

I don’t usually like floral teas and this tea smells very strongly of flowers. I absolutely adore the smell it gives off dry and while steeping. This tea tastes like apple and pear to me and is amazing steeped hot or made as an iced tea. It is a staple of my tea collection and is one of my absolute favourite teas of all time. I started with a 50 g bag of this tea, purchased 200 g when that ran out, bought another 250 g after that, and finally just got another 250 g on sale. It is really that good.

This is in my estimate an average tea. It is not bad, it is not great. I guess what I’m tasting is the quince fruit. I wouldn’t go out of my way to buy this again.

I brewed this one time in a Teavana Glass Perfect Tea Maker/Gravity Steeper with 3 tsp leaf and 200 degree water for 4 minutes.

Easily one of my favourite teas, it tastes a bit like bubblegum, but apple/pear comes through as well. Absolutely a cuddle up and sip tea for me!

Taste like soap gum, the same as when we were young. Ineresting the first time, but now this tea do not tell me more

I didn’t especially love or hate this tea but I only got .5oz early in the summer and just finished it off today. It’s got notes of apple and (I think) lychee, but I’m honestly not sure what quince tastes like. If I had the opportunity to get more of this, I might, but I’m not upset that it’s gone.

I saw this tea on sale at DT’s a couple days ago and I knew I had to try it. The last quince tea I had I enjoyed especially because it reminded me of lychees, and this one is no exception! At least in the aroma. The dry leaf is very aromatic, and smells like sweet and floral lychee juice. When the tea is brewed, the apple notes start to creep into the aroma, and the flavour is primarily apple, slight tartness, and a sweet note to it that is barely discernible but enjoyable when it hits the tongue once in a while. I would have liked this tea’s flavour profile to reflect more than just the apple ingredients, but nonetheless there is just enough going on in this tea to keep me interested and enjoying the whole cup. I wonder if adding a little bit of rock sugar would help bring those quince notes out in the flavour? Will have to try this next time.

Someone commented it tastes like bubblegum, I agree! It also tastes very fruity, mainly of apples.