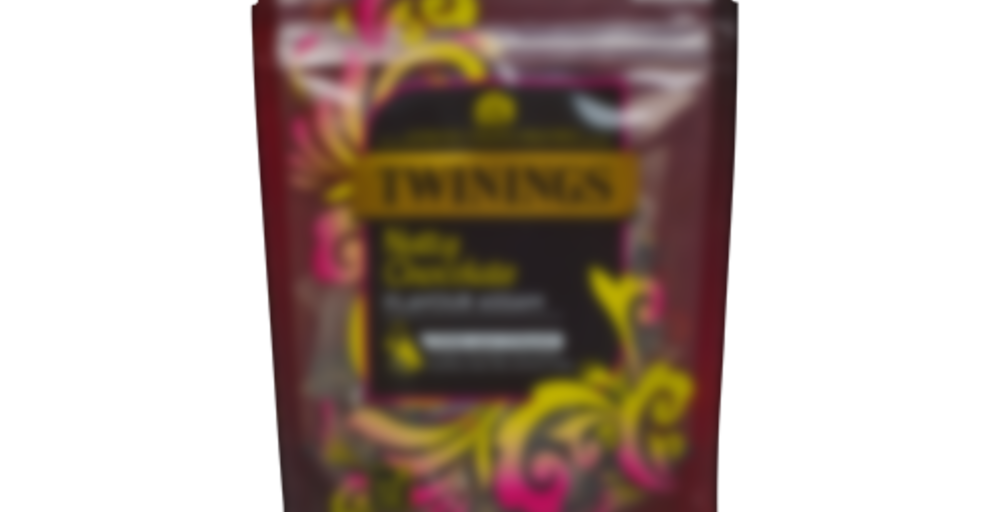 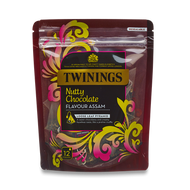 A sweet chocolatey and creamy hazelnut taste, like a praline truffle.

Inspired by tea & chocolate, a match made in heaven. Rich Assam loose leaf tea is a perfect partner to the flavour of delicious chocolate & hazelnuts.

mmmm Twinings does this chocolate tea right. I’m getting dark chocolate (cocoa, carob, baking chocolate), a lot of nuttiness that can best be described as toasted hazelnuts, almonds, and Brazil nuts. The base is thick and malty, but also very drying on my tongue and a bit astringent. However it is creamy, so that’s quite nice for a desserty tea. I’m thinking this would take milk well to balance out the robust Assam base, however I’m disappointing I can’t enjoy a smooth and balanced cup plain.

I bought a bag of these on the strength of all the good reviews I read about them at least a year ago, and then never got around to drinking them. At least that’s been remedied now – I’ve been drinking this one pretty steadily since November, mostly in my Timolino at events. Hence, I’ve never logged it either. I’m in the office today, though, and drinking this one. It’s really good. Hazelnut is the main initial flavour, followed by a dark-ish chocolate. It reminds me a lot of nutella, which is probably the intention. There’s not a whole lot else going on with this one, except a light maltiness from the base tea. It stands up to milk well, if you give it a decent brew time (I went for 4 minutes), but it’s best to drink it hot because it seems to get bitter as it cools…

I like this one. It’s probably my favourite Twinings tea.

A lovely tea-treat! Very Nutty and very Chocolately. Half & Half helps round out this blend.

Thank you, thank you, MissB, for throwing a couple bags of this into my grab bag! I enjoyed the first one months ago and never wrote about it, and have since been hoarding the last one. I’d say this is my favourite Twinings tea. Of course it’s one that you can’t get in Canada, because that’s how life works.

I love Assam. Easily one of my favourite varieties of black tea. The first bag was more chocolatey and nutty, perhaps because I might have steeped it at a lower temperature, whereas this time around, it’s bolder and maltier. I like it both ways, although I’ll admit the former cup was a little more exciting due to the additional desserty flavours.

From MissB. Thank you again!

So this is a tea that I think needs more leaf and less water. I did 1 bag in about 8 oz, but it doesn’t have the punch I was expecting from the assam base.

It does smell really nice. Nutty and chocolate, just like the name. :) The chocolate is nice and natural, and the nuts are pretty true – walnut and almond, I think. There’s a bit of bitter walnut skin taste in the steeped tea.

I’d keep the other two bags to try over leafing this tea, but I think it needs to be shared.

Thank you MissB for the sample! I’ve never actually seen Twinings sachets before, and this was a pretty cool flavour. I like sachet teas a lot; you’ve basically got the quality of loose leaf, but the convenience of bagged teas. What’s not to love?

This was definitely very nutty; I tasted the hazlenut but more so I thought it was rather peanutty? Except, I don’t think that’s actually one of the ingredients but I swear I was totally reminded of chocolate coated peanuts which are the bomb. The chocolate itself was pretty good; reminded me of baker’s chocolate because it had a very slight bitterness to it. Not a lot of distinct flavours from the base itself; maybe some super light malt notes?

Sadly, I made the mistake of letting the last 1/4 of the cup sit while I showered for work and when I came back it was a cup of unholy bitterness; so drink this one hot!

Big Brother Canada Live Feeds have been up since Wednesday night, so there goes my life pretty much. Honestly, the only reason I haven’t posted tasting notes and stuff since my last day off (Tuesday) is pretty much I’ve just been watching feeds non stop. When Big Brother’s on, it kind of rules my life. THIS IS MY SHOW.

I’m so disappointed; so many of my picks have turned out to be problematic as fuck (homophobic, misogynistic, and racist) – it’s BB15 all over again. UGH. However, some of them (Sarah and Naeha) are absolute iconic Goddesses! Especially Sarah; she’s everything I could have wanted from a house guest – she’s strategic, liberal/open minded, and actual BIG fan of the game, aware of her privilege, LGBTQ, hasn’t said anything homophobic/ableist/against anyone’s religion/sexist/racist (it’s so sad this has to be said, though), and is just PERFECT in every way. I think she’s an overwhelming fan favourite right now…

But here are my House Guest standings:

…And Risha doesn’t really matter currently ‘cause she’s evicted. But she probably would’ve fallen under “like” if she was still around. Disappointed in Godfrey/Graig for being misogynistic slut shaming douchebags (and racist in Graig’s case) who instantly formed a “Bro Pack” mentality and rather unoriginal formed a guys’ alliance when they were two of my favourites really early on. BOO ON YOU! Some of the other guys have kinda come close to being this shitty; but these two are the worst IMO.

Thank you MissB for the share. I didn’t quite get the liquid nutella that others did, though I really wish I had because that sounds amazing. Instead I got a nice tea that was sometimes nutty, sometimes chocolately, and sometimes malty black base. It was pretty good though not something I am running out to stock as I have my MF Mousse au Chocolat for when I have chocolatey cravings. Still, it was fun to try!

This one definitely requires some form of sweetener to get the nutella pulled out of it.

A friend from Exeter sent this to me via post for Christmas! All the way to Canada – it was a gorgeous care package and the tea itself is delicious!

Flavoured like a ferrero rocher (oh yeeeah) and bold enough for some cream and sugar. Doin’ it right, a lovely quality tea bag!

mmmm “nutella” tea. Another from missB this was a win for me. the right balance of chocoalte and nut along with a decent base. It doesn’t replace my MF mousse au chocolat but i DID enjoy this one a bunch, especially for a tea bag!

First tea of the day and the first I tried from my Christmas haul. My mother bought me a lot of flavoured tea bags again, I told her before that bags aren’t my thing but she never remembers. Gives me the chance to try something I wouldn’t normally, I suppose. Hope you all had a wonderful Christmas and holiday.

This bag was pulled out the packet and sniffed, out of habit above all else, but to my surprise it smells amazing! Rich and dark cocoa with roasted hazelnut and gentle spicy finish.

Put into boiling water for roughly 3-4 minutes.
The result is a sour, dark roasted hazelnut tea that matches the smell. Each sip fills the mouth with flavour that remains smooth enough without milk nor sugar. The Assam base adds a nice rich spice to the blend. The downfall of praise is that this tea leaves some dryness in the after taste, and after drinking this I feel I need something else to wet my mouth. Still the flavour was nice and perhaps with milk and sugar it would have eased the dryness, or turned into latte form this would be amazing!

This is what I was talking about, it’s a tea I would never have bought myself but actually enjoyed despite bag form. Best hazelnut tea I have tried.