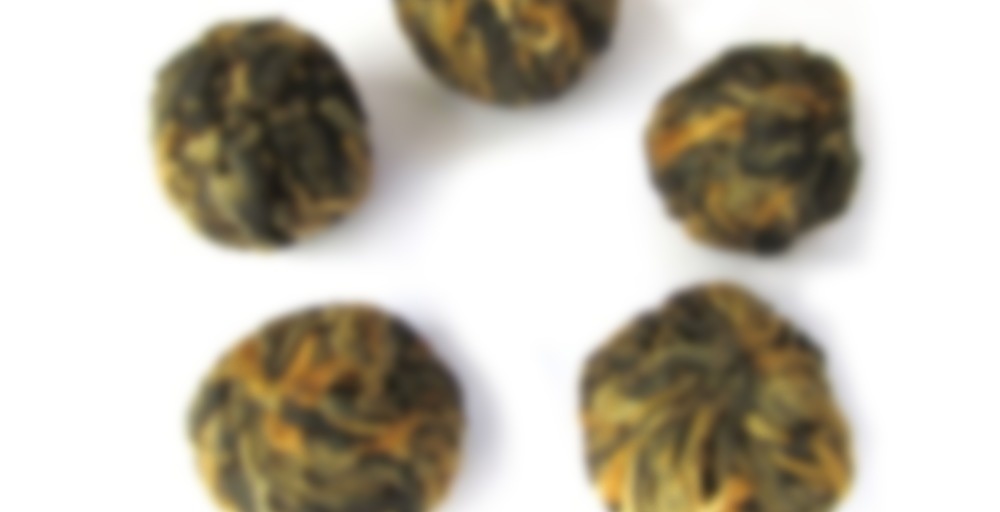 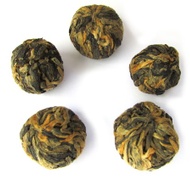 This is a newly sourced and different Yunnan Dragon Pearl compared to previous years, it features larger pearls with a smoother more refined taste.

Received four pearls from derk, thank you!
I took one, though there is written 2 pearls as good preparation, but as well 3-4 minutes steeping time.

I prepared grandpa. And I got baked bread, malt, and overral typical black tea notes. They were fine, it wasn’t bitter at all even it was steeping for 30 minutes or something. It has dissolved pretty well too. I have expected just more overall flavour, it was bit like washed out, but maybe because the age (spring 2016).

This was my first sipdown of the week and a tea I had kind of been planning on trying for some time. I know I mentioned in a previous review that I am not usually a huge fan of dragon pearl teas, but I am a huge fan of Feng Qing black teas, and this was a dragon pearl black tea from Feng Qing. Naturally, I couldn’t pass it up. I wasn’t really sure what to expect from it, but ultimately, I found it to be a very good, very solid Feng Qing black tea.

Prior to the rinse, the dry tea balls emitted aromas of malt, cream, sweet potato, honey, and pine. After the rinse, I detected aromas of roasted almond, roasted peanut, vanilla, and sugarcane. The first infusion introduced aromas of chocolate and baked bread. In the mouth, the tea liquor presented notes of malt, cream, sweet potato, vanilla, sugarcane, and pine that were balanced by hints of roasted almond, chocolate, and baked bread. The subsequent infusions introduced aromas of fennel, eucalyptus, black pepper, caramel, and marshmallow that were accompanied by subtle scents of clove and cinnamon. Stronger and more immediate roasted almond, chocolate, and baked bread notes emerged in the mouth alongside belatedly emerging honey and roasted peanut notes. Impressions of minerals, butter, fennel, eucalyptus, marshmallow, caramel, black pepper, clove, and orange zest also emerged along with hints of cinnamon. As the tea settled and faded, the liquor started to emphasize notes of minerals, malt, cream, chocolate, caramel, orange zest, marshmallow, fennel, pine, butter, and baked bread that were backed by hints of eucalyptus, black pepper, clove, vanilla, and sweet potato. The final infusion brought back strong, muddled woody, spicy, and herbal flavors that were balanced by cream, malt, and chocolate notes.

This was a very nice Feng Qing black tea that was missing the pronounced earthiness and distinctive vegetal characteristics of many other such teas. On the one hand, I missed these characteristics, yet on the other hand, I greatly enjoyed the smooth, silky, and long-lived tea liquor these dragon pearls yielded. One issue I had with them, however, was that I could not get the pearls to completely crumble on their own. Prior to the final infusion, I noticed that there was what appeared to be white thread running through the middle of each pearl, so I picked them up to investigate, and sure enough, there was thread holding them together. I then pulled it out and went back to work, but I was surprised by this because I had literally never had dragon pearls with thread still in them. And I should also note that I was at least somewhat familiar with Feng Qing dragon pearls and had some experience with them prior to trying this tea. Oh well, the thread surprise did not take away from the tea. It was very nice overall, but I think this tea would probably work best for grandpa brewing on the go or as an introduction to Feng Qing black teas since it was missing some of the more challenging aspects that a number of other such teas bring to the table.

Finished this one off this morning, comparing it with the black sheep from Teabento. This one is malty, slightly sweet and smooth. It’s similar to the dragon pearls from teavivre but different. I’d need to try them side by side to really get a sense of which i prefer. These also kinda of remind me of the flowering cones from Mandala. All in all, a good cup.