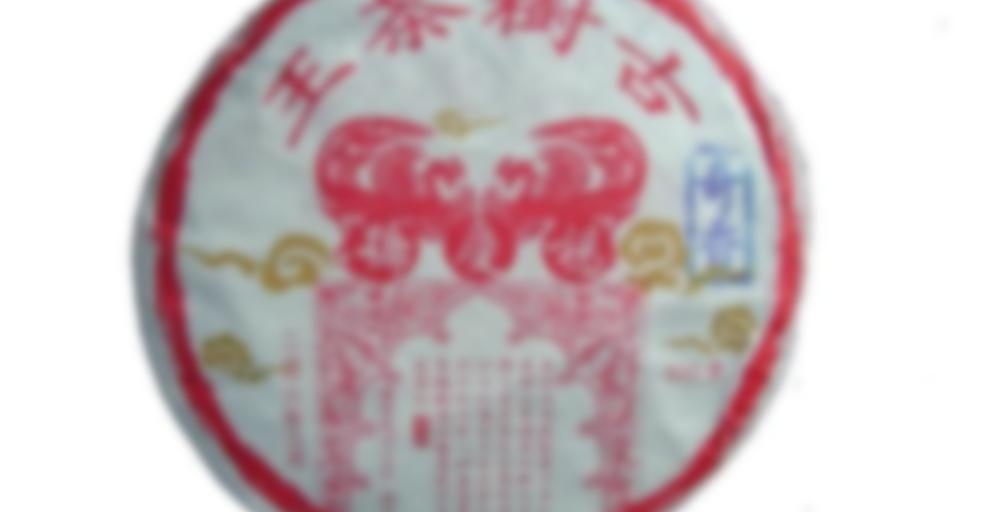 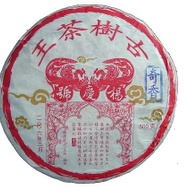 This Gu Shu cake was reported as being made of a blending of premium sun-dried leaves from old plantations on the six famous mountains, and contains 100% gushu with at least 30% of leaves from YiWu mountain trees. Unlike the Baisuixiang and Cangliu this is 100% spring harvest. Also known as Chi Hsiang.

This one is similar to other YQH productions, but also more pungent at the same time. However, neither the taste profile nor its texture is particularly engaging and I didn’t find the cha qi to be very pleasant either.

Dry leaves have an aroma of almond shells in a Chinese medicine shop, while after the rinse I can smell wood in a fireplace too. The taste is woody, herbacecous and somewhat sour. There are notes of sage, burned butter, nettle as well as a protracted camphor one. The aftertaste has both some bitterness and biting sourness.

Initially, the liquor is quite thin and astringent. Once the leaves open up, the mouthfeel is rather airy, creamy and a little bubbly.

my favorite YQH, I own many cakes, and keep buying more. Its my daily drinker. Since this tea is a blend, sometimes you get a session that’s a flop, but more often than not I get really good sessions. This tea is complex, sweet yet hits the lower register without being cloying or too rich, lingers for a while, and I never get bored.

This is also the tea I give to anyone who has never had puerh and they are blown away at what tea can be. So its safe to say this is a good tea for both beginner’s and experienced puerh drinkers. It can brew strong, but never gets bitter, just a bit leathery tannic which you can dilute with a bit more hot water. I actually prefer the deeper part of the cake closer to the bing hole, the more compressed part. I think the outer edges are too loose and aged too fast.

This is IMHO Yang’s best production value-wise (bang for the buck $/g) and I’ve tried/own quite a few YQH teas. Yet this is the one I always come back to regardless of price or scarcity. Definitely worth a cake+

Well if I wasn’t previously jealous of YQH cake owners… I am now.

This sample is from last year’s Pubertea group buy – apparently there was also some in this year’s, so I will have a bit more of it to drink later! This tea looks pretty nice. Dark and obviously aged. The dry leaf had a slightly sweet, leathery and woody aroma. After a rinse, I first picked up a bit of camphor, followed by a sweet, ever so slightly musty woody aroma which reminded me of a clean antique store. There was also a slight fruity note to the aroma, like a dark currant or berry note. Not super sweet.

The flavor starts off sweet and woody, with a thick texture. In the first steep or two, I did get a bit of sharpness to the flavor which was not entirely good, but that was out of the tea quickly enough. It never really shows up distinctly in the flavor, but I pick up a bit of a coffee aroma from the liquor of the tea on occasion.

As the tea moved past the slightly sour (though still pleasant) first couple steeps, it really came into its own. Earthy, thick, woody, and sweet. There was a lightly camphorous, cooling mouthfeel after I swallowed. The woodiness came out more distinctly as I continued to steep it out, presenting a really nicely clean woody flavor for the bulk of the session.

Around steep nine or so, I noticed some fruity flavor popping up – the dark fruity (currant?) note I smelled in the aroma off the leaves at the beginning of the session.

I did notice a bit of a calming qi while drinking this tea, mostly in the upper chest/shoulders. It’s not a qi powerhouse. Flavor and texture are very nice. I’m glad I have some of this tea! The tea can be had for $0.52/g, so in terms of the more typical 200g size from artisan tea producers, that comes out to $104. Based on these two sessions, I would probably not buy this tea at the price it commands.

This sounds like an interesting tea that I would enjoy, but I am glad you pointed out the tea’s value per gram. I think the steep rise in puer prices makes it increasingly difficult to justify purchasing a whole cake from famous/popular boutique vendors.

Indeed – not to mention the fact that YQH cakes are gigantic, so are an even larger investment unless you split with somebody.

I’ve never tried YQH. I only know people get their cakes via a guy names Emmet (correct?). Does he provide samples?

He doesn’t but Liquid Proust sells them on his site.
https://www.etsy.com/shop/LiquidProustTeas

Did not know that, as I don’t normally seek out famous mid-aged teas. I wanted to at least try a sample, so thanks!

Leaf before: not too tight, not too loose. Roughly in the middle as far as compression goes.
The rinse brings forth the old basement aroma that comes off the leaf telling me that it may need another way up call so I leave it alone for four minutes. The liquid is lighter than expected upon the first brew, light caramel color. Aroma from the liquid is much easier than that of the leaf which makes it more appealing to bring towards the mouth. Thin, semi light of a taste with a little throat feel that comes with the side of the tongue. Leaf might just need a bit more awaking.
Went through a good four steeps while packing up the Pubetea packages and realized that this is the type of tea you drink and then wait a good four minutes to really taste it. This tea has a nice pear skin with autumn leaf lasting taste. Kind of dry, semi tart with some sweetness. The tart seems to come from the little bitterness this tea has which I detect easily due to having a sensitive mouth which gives this room to still become a mature tea so it fits in the puberty theme quite well actually.
Only on steep eight after two hours which tells me that this is a tea that not only last, but it’s taste is one you don’t just sip down quick so it does last in different ways. I’m not sure how it will change over time since that’s not a thing I have looked into or experimented with yet, but to compare it with others… it is a step behind the 2004 Dingji Yesheng. That tea was just fantastic. While this is dry sweet like a pear and nice mouth coating for taste that is about 5 to 10 minutes, I’m just not sure about the purchase or not. However the one thing to note about purchasing this cake is that it is 490 to 500 grams of tea rather than 340 to 357 when you want to price it out per gram. It’s certainly a fair priced one compared to other options out there right now when you are doing price comparisons. I do have enough for a second session so I will follow up and add anything after I hit the 15th steep tomorrow since I plan to make this a two day tea.

Using the same leaf at 6 infusions at a time. Second session was after dinner last night while I ate icecream; it worked. Today I ate spicy food and this didn’t have a taste… my fault. Now it’s in the afternoon and I’m on about the 20th steep because lunch today was short. There’s not a sweetness that a young pu’erh has even if it is in the background. The old taste is pretty much gone and the viscosity is still the same as if it isn’t going anywhere. Not the best steeps as it’s a bit weaker, but it’s much easier to enjoy for someone who prefers the younger aspect of puuerh and not the older. Still going semi strong depending on who is to drink it though.

This tea is in my opinion quite good. It ought to be for what it cost. It started out with what I would describe as notes of hay and tobacco. This lasted maybe two steeps and another taste emerged. It became quite smooth and in its own way quite sweet. Not mind you the apricot sweetness of a young sheng but something I am not sure I have tasted before, a sweetness with an aged flavor. It did not develop any of what I call unpleasant aged flavor that I have tasted in many ten year old sheng. There was no taste of wet storage. This tea must have been stored quite cleanly for it did not seem to develop any storage taste. As to qi, I am really feeling it. I am energized after fifteen steeps in my small 60ml gaiwan. I will most likely save the leaves and continue tomorrow because the leaves are not done and this was expensive. This tea rates a 100% for it’s qi and a 90% for its taste. I have enjoyed this immensely.