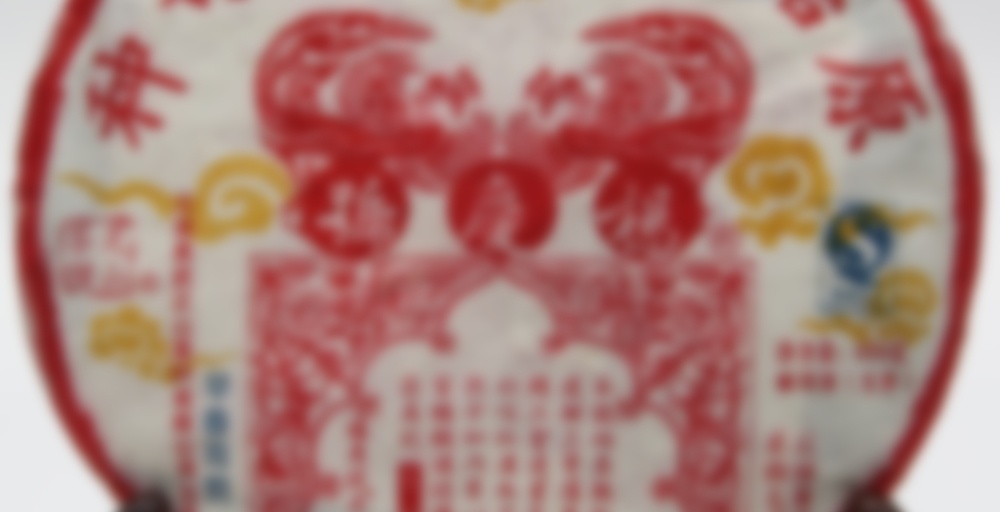 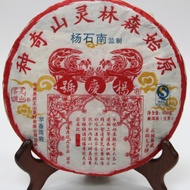 5g, 90 mL in gaiwan. Was stored w Qixiang cake ordered direct from Yang in Oct., so dry leaf still has some of the characteristic sweet particular to YQH smell, even after breaking up 100g or so into a separate tin and stored separately for a month or so now. None of the characteristic Yang storage is present in taste, which surprised me. I tried a Hou De stored YQH Yiwu Chawang recently, and that very much retained YQH characteristic storage tastes, so expected more of the same here. Tastes like an upgraded Qixiang. Couldn’t judge on effects because really short on sleep back when I had this and had been drinking through an oddball variety of things one after the other at the time.

Tasting Profile: A bit lighter at the start. Wet Cardboard paper, something slightly steamed milky to it with an echo in the aftertaste of a slightly chocolate hint, nutty tart note of chestnuts, walnuts and a mix of grape seeds and sunflower seeds plus a sugar crane sweetness. A nice fruity mix of pears and peach skin. There is a nice sourly astringency to it which tingles the tongue and animates every tasting buds it can reach. Quite furry mouth feel. Not a total massive puncher generally it really develops its strength within its light compositions and Qi. In many other reviews I read a lot about “many steepings” at least around 12-20. I can’t say I experienced the same! From the start this aged Sheng is quite on the lighter side. In my opinion it is quite a nice Sheng for around 5 to max. 7 steeps but after that there is not much going on anymore! But the aftertaste of chocolate bananas is really outstanding and an experience of its own

Heavy thick and smooth with a long lasting bitterness and a bit astringent.
Images and more at https://puerh.blog/teanotes/2007-huangshan-qizhong-yqh

its my second try of this tea. i dont think i can give the proper review. still trying to figure out the notes.

First time ive tried i remember it being stone fruit sweet. last night it was a little different. very enjoyable but not as complex as the first time ive tried. could be many factors. with later steeps astringency built up but it was pleasant

haha. i still have to try this “face melting” tea

Got a sample of this recently. Thank you Boychik for this sample. This was a good semi aged tea. It started off with some notes of tobacco and leather, as do all the Yangqinghao teas I have tried. This did not last too long. It evolved into something nice with a sort of a muted sweetness. Not the apricots of a young sheng but still what I would describe as a sweet note. I enjoyed this tea. It was good. I steeped this sixteen times in a small 50ml gaiwan. I think it would go another eight or so with longer steeping times. This is a high quality tea as are all the Yangqinghao teas I have sampled or bought. This is one I would consider buying at some point. I don’t think I am going to participate in this group order coming up in a few days.

With only two YQH samples, I have been very picky on when I’ll use them. Today was beautiful outside and I just got the 6th book of the new printing of Master Keaton in the mail: https://www.instagram.com/p/BC_UbhwRYLN/
That made me go to my box of ‘this is the expensive tea samples’ with intentions to have a wonderful afternoon. The leaf looked rather dark with clear signs of age on it which excited me. Brewing this was pretty easy as the leaf opened on the second steep, however my findings are more negative than positive. This is not a raw pu’erh for me nor for others who like the lighter teas. If I would have blindly tried this tea, I would have given up at steep three as the first two were really hard to sip down. Very strong notes of leather and tobacco come out from this tea with an underlining sweetness similar to a raisin (not taste, but that small sweetness) and a nice mouth feel. While there is no bitterness to the taste, the texture that the liquid leaves behind has the similar feeling as that of a smoked tea where your mouth feels like it is being dried a bit even though your mouth feels like it is being dried a bit even though you just drank a liquid.
Well, since I did not blindly taste this and knowing what it was, I continued to brew this out. At least the tea was consistent for me in regards to all the mentioned taste. Continuous leather mixed with tobacco and a diminishing undertone of sweetness that gave it an attribute that I liked, I just can’t see myself wanting any more of this.
Now that I have finished my 12 steep session, I have decided to go check the price because in my head YQH means $$$. It looks like this tea is $.48 a gram which I wouldn’t consider a really high price as I associate with YQH. As usual, I read nothing of this tea before drinking it because I want my own thoughts to bring forward my tasting notes; it looks like this is noted to be stronger than its mellow cousins per the description which would have already made me realize it wouldn’t be one for me.
Going through the YQH and knowing my preference, it looks like I have two I’ll be looking at: 2004 Dingji Yesheng because yesheng is tied for my favorite with bang dong and the 2004 Jinhao Chawang.

I thought the Qizong was ok, but I preferred the Tejipin and the Dinjipin is quite nice too (but also quite pricey). Be interested to read your review of those if you have them. I can send you a sample of the Teji if you don’t (I don’t have any Dinji to offer)

Just looked at the description for a Master Keaton anime online…sounds sorta like an Indiana Jones type of thing. That sound about right? If so, I might be interested in it lol.

So far all the Yang Qing Hao raw I have drank have started with notes of tobacco, leather but by the time I was done with them the qi was generally so strong I didn’t care. Also, in the ones I have tried they improved after a few steeps.

maybe the tea is astringent?

I pulled this from storage and gave the jar a whiff. I was picking up some pine wood, leather, tobacco, and an oddly placed bitter greens. This is the youngest that I’ve had from YQH. I placed a few good sized chunks of these beautiful leaves in my warmed jianshui. The leaves are nicely compressed and very dark. I can spot large leaves and some stems with some golden strands. I opened the lid and took a whiff. This warmed scent fits the profile of the aged sheng with aroma of pipe tobacco. I was also picking up some smoke and a little menthol in the background. I washed the leaves once and prepared for brewing. The steeped leaves scent began as tobacco and leather with a slight oatmeal and maybe plum background. However, the scent completely changed by only the second steeping. The scent became sweeter, and there was an odd sour green fruit scent, perhaps kiwi or maybe a slight lime. The taste was phenomenal! The brew touches the tongue and immediately covers the senses. The brew gives a full mouth-feel with a salivating sensation. The brew has a slight wood taste with a sourness in the background. I could already feel the huigan building up after the first sip. The brew flips and becomes prominently more woody and with a drying sensation at the second steep. Then, the brew flips back again at the third steeping by becoming intensely sweet. The brew begins with a powerful stevia sweetness and moves back into a slight sour wood taste. The huigan returns and takes a hold of the aftertaste. From this point on, the brew follows a circular pattern. The sip would begin with a stevia sweetness, then move into a sappy texture of maple wood, next it would transit into a sour leather tone, and finally it would end back at the stevia sweetness. This was a very complex brew. I was amazed at the transitioning of the various taste profiles. The brew begins to give off a numbing feeling in the later steeping sessions, and this feeling continues to grow. The qi for this brew is something else. This is a knock you on your @$$ brew. I should have eaten before beginning the session. The feeling begins in the forehead with some warming and flows throughout the body. I’m used to this feeling, so I continued drinking. Then, about half way through the session, I took a gulp and I was floored. I had to step away and eat a snack while I recovered. I returned to the tea table with a rejuvenated feeling as my body adjusted. I experienced a lot of blood flowing, sweating, hair prickling, and a wavy head feeling. This tea is something special, and it may be one of my favorites from YGH. I have some more of this, and I’m going to keep it in storage (hopefully). I’d love to see how this develops at the decade mark.

:). It’s my favorite of the low/mid-YQH teas and the one I bought the most of.