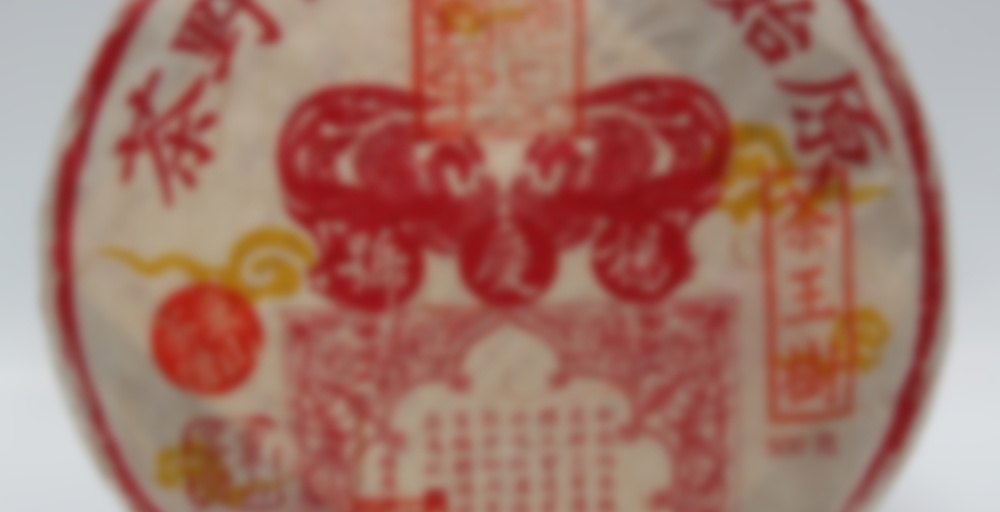 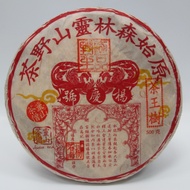 2006 Yang Qing Hao “Chawang Shu” Raw 500g
Premium Yiwu region gushu. All material in this production are sourced from Chawangshu, an old puerh plantation in GuaFengZhai.
YQH was started by Taiwanese pu-erh collector, Yang Shi-Nan. Mr Yang has collected and studied pu-erhs since the 1980’s. His dissatisfaction with modern “pu-erh making” led him to work to revive the pre-60’s pu-erhs premium quality and tradition. His teas are now highly regarded and considered a premium boutique brand.

5g, 90mL EoT hongni, Brita tap, boiling. cake edges so fair bit of dust, but not much bitterness at all. dry leaf is pretty classic YQH sweet mushroomy. No surprises. 1x rinse, didn’t time but pot has a pretty slow pour. wet leaf is also standard minty herbal medicinal, with something tart and almost acidic in there as well. I already had quite a bit of caffeine this morning, so that could be why, but this tea didn’t affect me much. Some warming and slowing, but people usually seem to report sedative feelings from this. Pretty good texture given water that usually thins out immediately. Taste was essentially linear. Really strong mushroom backbone. There’s hints of floral and medicinal notes occasionally, and some odd nuances similar to tomato and raw olives. Some sweetness in aftertaste, but not very strong. Middling session overall, and tossed into thermos after like 5 steeps total (pushed for long steep times). Thermos was nice texture, but basically no taste and a kind of honeyed edge. Hopefully subsequent sessions will be more exciting because I have quite a bit to work through…

This is probably the first aged tea I encountered that can match up against the best examples of young sheng I’ve had. It’s just a shame that it is so expensive. I like the taste, although it really only shines after swallowing with its neverending huigan and a unique, sort of expanding and numbing, mouthfeel. The liquor texture is likewise among the best – slick and full bodied. Cha qi is pretty heavy, but not extremely aggressive. The energy seems to be mostly focused around head and spine.

Shortly after I got this sample, there was a noticeable humid storage aroma reminiscent of dungeons / castles, more so than in the other YQH teas I got. Now, after almost a year in my storage, this note is basically gone though. The aroma is crisp, warming and nutty with notes of milk and incense instead.

The taste is very sweet, woody and tart initially. Texture wise, the liquor is bubbly and smooth. There is a mild camphor sensation as well as some astringency. In the second steep, the flavour profile gets quite heavy with notes cedar wood, celery root, and vegetable broth. Mild bitterness appears in the very thick and full-bodied third infusion. The aftertaste is sugary sweet with a hint of vanilla to it.

There is definitely more to uncover here, the flavours are basic yet unique in some way. For example, for 12th steep I wrote: “woody with a twist of coffee and soil”. If I get another order from YQH and it is still available, I may grab a cake.

I love the dungeon comparison!

Pulling out a YQH tea to drink while I go through Excel to see if I can manage to pay for some YQH to be in the 2018 Sheng Olympaid. Part of me struggles with not being able to do everything myself because I have up until recently with all the stuff in life going on… engagement ring and college, AHHHHHHHHHHHHH. However, I love life so these little things are bumps to learn how to coast over : )
From the rinse I got an unexpected Smokey smell.
First steep came out and had slight smokey taste like beers that are finished in barrels… if that makes sense, like a faded aroma that comes off with a taste in the background. Liquid doesn’t seem thick until you drink it; it seems to like to stick around for a bit.
Second brew has the light from the door peering at me as the astringency is about to be gone… even though this is somewhat dry, the long lasting lip smacking taste is splendid.

Some number… I forgot to write. This is like a smoked leather wrapped plum that sat around for a bit. It hits pretty well to; for those who want to now what means, it feels good.
Great stuff, I’m just exhausted and don’t have it in me to write… hope August gets better!

Ummm… yeah… a little off the deep end.

19th – 600s – The leaves were cold and sleepy so the taste was a bit watered down, but still pleasant.

20th – “You can’t be serious” – I have a cup warmer at my desk and this time I set my teapot on it and left it steeping while I did some editing. Not sure how long I let it sit, LOL, but hot damn if it didn’t yield me a damn good cup of tea at least as good as the 17th steeping. At this point the amount of time needed to get great taste from the leaves is pretty dang high, but what the hell, let’s go for one more.

21st – “This is absurd” – Love it! I really should lay off, but now I’m amused at how much flavor I can get out of these longer steepings. I’m guess the last two have been at 15 minutes or so. I think keeping the temperature up and constant is a big help.I want to keep steeping until there’s just no flavor, but I don’t know if I have the patience. This one is pretty close to the 18th steep as well.

22nd – “Cut it out already!” – Alright, party people. I think this is the end of our reckless and insane tea steeping ride. The sweetness is now very mellow and alas, there is no discernible bite or crispness on the finish. Actually, there’s a little, but it does not soar my friend. It is time to retire these truly valiant and formidable leaves.
As a parting note, the flavor/aroma that showed up in the 16th steeping… that’s what the expired tea leaves smell like. Lovely experience from start to finish.

Toss it in a thermos with boiling water overnight and enjoy some more.

I’ll do it… for science! Seriously, good idea. Thanks!

Yep. It’s what I do for teas I like a bunch.

What an exciting tea session I had today! My life has been so hectic over the past 10 days that I have not even had time to do one gong fu session. I missed them as part of my daily routine so today I could not wait to begin a session and I knew it had to be something special. I chose the 2006 YQH Chawangshu. This is definitely an extra special tea! Sourced from the Chawangshu plantation in Guafengzhai, you know that the material has to be high quality. Beautiful leaves which are obviously carefully stone-pressed. Flash brew and then the first smell – rather interesting sweet notes dominate. Clear and bright golden yellow tea liquor. This liquor is very agreeable in the mouth – coats the mouth; fills it with the sweet tastes of fruit, honey and wood; begins to promote a bit of salivation. Cha qi is very individualized and for me, I began to feel this one after the second infusion – a nice relaxed feeling began to move throughout my body and continued to build throughout the session. Thank you Emmet for bringing this tea to me!