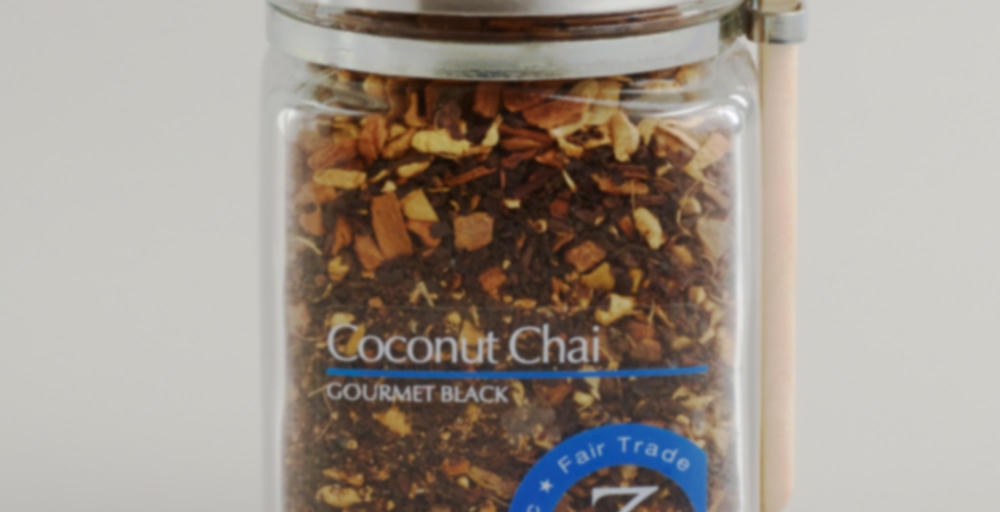 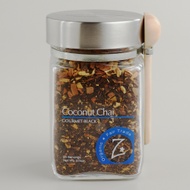 by Zhena's Gypsy Tea
58
You

Zhena’s Gypsy Tea Coconut Chai Black Tea is a robust and full-flavored black tea accented with exotic imperial spices. The bold, concentrated character of this lush black tea lends itself well to the full notes of cardamom, ginger and clove. Delicious with a splash of milk, the sweet hint of tropical coconut fragrantly fills the cup, offering an inviting taste of paradise to savor from any spot on the map.

It’s really cold and windy today, so I’m continuing with my chai quest.

Thank you jeweledthumb for sending me a sample of this one.

This is really good, nice light chai with just a hint of coconut notes. I’ve tried a few Zhena’s Gypsy Tea’s now and have been impressed with them. This isn’t complicated, it’s really good,“everyday” chai.I would be perfectly happy drinking this anytime. Will keep my eyes open for it out there. :))

I can always send you more, you know. If you’ll accept another package in the near future. ;)

I followed the instructions to the “T” even though 4 tsp in my 16oz steeping mug seemed a little ridiculous for a chai.

It was pretty good but got a little bitter towards the end of the mug. I probably could have gone with less leaf. It resteeps pretty decently but might be because there was so much leaf.

Still, I can’t complain much since I got the jar for all of $4.99 the last time World Market put all of their tea on sale (50% off yay). It’s pretty freaking adorable, it’s glass and comes with a little scoop!

Boiling 3 min, 0 sec
Yours I Like This
5 likes
1 comments
Edit

I agree that the jars are super cute, and when World Market has its sale on tea, it is fun to try new teas. I bought several varieties during the sale too ;-)

This was my first loose leaf tea and it’s sadly unimpressive. The black tea is very bitter and doesn’t have much body and the coconut is overpowered by the other spices in the flavor. I felt like I was drinking more of a diluted black tea with cinnamon water no matter how long I steeped it. All in all it’s not really worth the price and many chai flavored bagged teas are better than it.

I really love Cost Plus World Market’s coffee (the pumpkin seasonal one is divine!), so when I first got into loose leaf tea and saw they had a bunch of jars of tea, I figured I couldn’t go wrong with any of their offerings. Ultimately, I grabbed this Coconut Chai. I haven’t quite hit the best by date on it yet, but I’m getting close, it’s been so many years and I’m still trying to finish it off, I dislike it that much. It is a really weak chai. The base of the tea even looks weak in the cup, and there is just something that tastes sort of… chalky or barky about it. It just doesn’t have a nice, smooth blend of spices like other chais I’ve been spoiled by, and for a coconut chai, it doesn’t even have coconut in it! The coconut notes are only imparted through flavoring. Would adding some coconut flakes have been too much to ask for in a coconut chai blend? There is a mild spiciness to the cup, but the whole thing is just underwhelming. In order to finish it off, I’ve mainly been massively overleafing the brew and making it by the quart iced, and then adding a bit of vanilla almond milk and coconut milk creamer to actually give it some coconut flavor. It’s still not the most exciting chai latte, but it is tasty enough to drink (the coconut creamer is a definite improvement!)

It’s too bad you didn’t like this one. I’ve found Zhena’s gypsy tea to be better than most brands. Their rooibos “fire side chai” is the best chai I have ever had. Maybe the black teas are less spectacular, I’ve only ever tried the herbal blends.

The black base definitely felt really weak. I don’t care for my blacks really strong or astringent, but they need enough flavor to carry the blend, and this one just felt kinda like when a soda goes flat… hints of flavor but a dry sort of blandness. And the coconut just felt too syrupy sweet and artificial tasting. I was on vacation when I picked this up and haven’t seen this brand in my local stores; compared to most bagged teas I wouldn’t doubt it’s a better alternative, though I still would be hard-pressed to buy this particular flavor again. If I could easily get ahold of it, the lavender and rose blends actually sound quite nice, I’m quite a floral fan, especially if their rooibos is good quality since it appears their lavender blends use a rooibos base.

Zhena’s Egyptian Mint is really good. It’s honestly the only non loose tea I have & enjoy very much.

It’s good to know to avoid this flavour. I’ll make sure to choose something else if I ever buy another tin.

Zhi tea has a coconut chai that I like. Just in case you are looking for recommendations once this tea is gone. :)